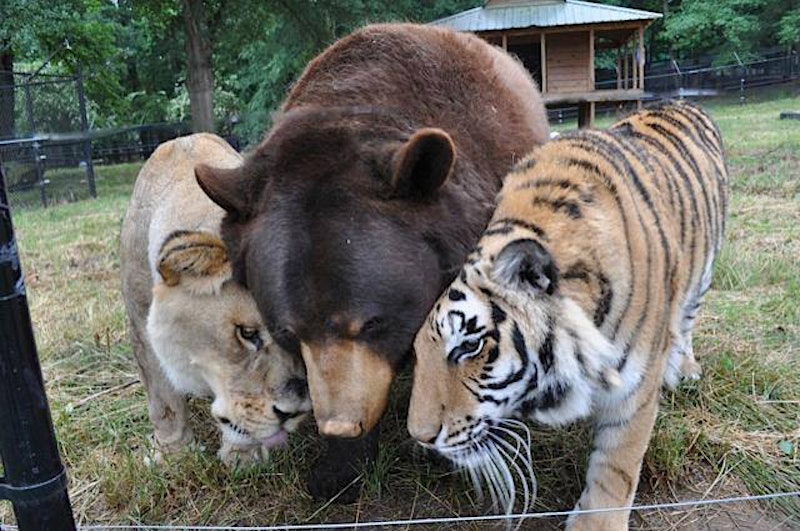 Ya know, lions, tigers, and bears aren’t supposed to get along. They’re all predators, and they don’t generally play well together. But the trio known as BLT apparently didn’t get the memo, and we couldn’t be happier about it: They’re such good BFFs that they literally can’t live without each other. You guys. This is so cute I can’t even handle it. All together, now: Awwwwwww!

Leo the African lion, Shere Kahn the Bengal tiger, and Baloo the North American black bear all live in the same enclosure at Noah’s Ark, a nonprofit animal sanctuary located just south of Atlanta, GA. They were discovered in the basement of an Atlanta home during a drug raid in 2001; injured and malnourished, the cubs, who were only a few months old, were in need of some serious TLC after their ordeal. As Noah’s Ark nursed them back to health, they were separated briefly when Baloo underwent surgery to repair the damage inflicted upon him by a harness that had become deeply ingrown during their earlier captivity. Leo and Shere Khan became alternately lethargic and agitated, refusing to eat and vocalizing for their lost brother. Once Baloo was restored to their enclosure, though, they all perked right up, and they’ve been best buddies ever since. They’ll even be celebrating their 13th birthdays together on June 21. Happy birthday, you three!

According to My Modern Met, Baloo, Leo, and Shere Khan likely bonded together due to the abuse they experienced during their first few months of life — showing that beautiful things can grow out of even the most terrible circumstances. Apparently they even groom each other and seek other forms of physical affection, licking one another and rubbing their heads together (as you can see in the above photo). Baloo is the leader of the pack, something which most of the staff at Noah’s Ark finds surprising; said Kandi Allen, the sanctuary’s social media director, to HLN, “Typically the tiger should be the leader, but it’s Baloo.”

Here's what they looked like when they were babies:

BRB, guys. I think I have to go cry now. And then I have to go make a donation to Noah’s Ark, and maybe make plans to visit my local animal sanctuary (Popcorn Park — if you live in New Jersey, GO TO IT. IT IS AWESOME.) over the weekend. Check out more photos of them at Noah's Ark's Facebook page. So. Stinkin'. Cute!

More like this
The 4 Best Food Bowls For Dogs With No Teeth, According To Experts
By Maria Cassano
Dog Trainers Swear By These 15 Little-Known Tips For Making Your Pooch Behave Better
By Allison Bolt
This Wi-Fi-Enabled Pet Feeder & Camera Gave Me Peace Of Mind On An Overnight Trip
By Danielle Calma
The 5 Best Toys For Dogs With Anxiety, According To A Veterinarian
By Maria Cassano
Get Even More From Bustle — Sign Up For The Newsletter