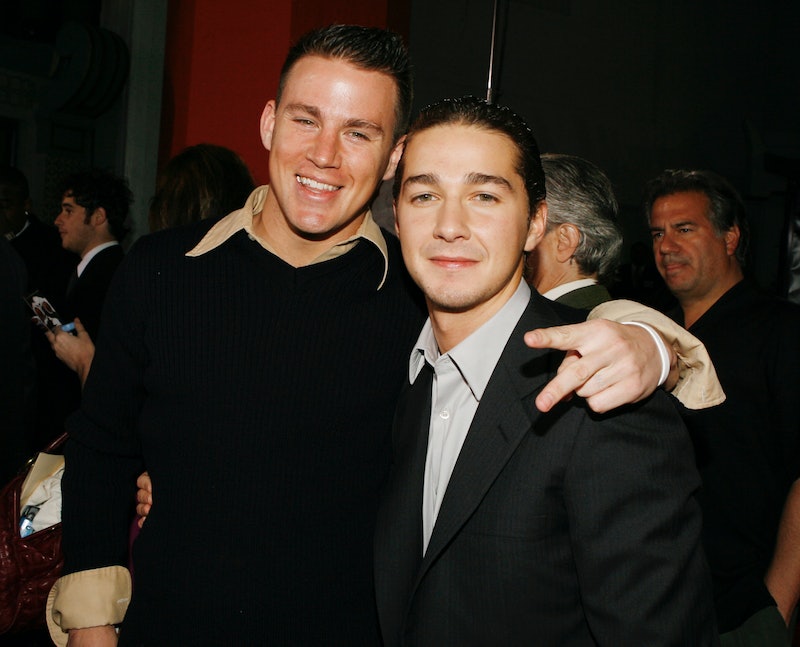 Channing Tatum and Shia LaBeouf are completely different people today: one loves to embrace his stripper past, the other likes to make misguided statements about art. But back in 2006, when they were filming A Guide to Recognizing Your Saints, they were both just struggling actors. Channing Tatum told the tale of how he and Shia LaBeouf had some wild bonding time off set in a recent GQ profile.

"Me and Shia, I think we had just met that day. We were, like, 'What shall we go out and do?' We were drinking. And I think our initial thing was 'Alright, let's go out and try and get in a fight!' This was just young, dumb idiot actors thinking that that's going to bond us. Because we'll shed blood together, blah, blah, blah. I've never seen him since then."

LaBeouf told the same story to GQ back in 2008, but his was a little more elaborate. LaBeouf claimed that Tatum broke a plate-glass window, stole a Spiderman bookmark, and ran away. Tatum's reps denied it at the time, but now Tatum has confirmed the story, although he only admitted to kicking in a window.

Pretty harmless for childish vandalism. But now Tatum and LaBeouf's antics have grown bigger and more complicated. Who grew up wilder? Let's find out...

Both events make you sort of concerned for these actors: Shia LaBeouf was arrested in 2005 after an altercation with a neighbor in which LaBeouf purposefully ran into his car and then came over to his house, waving a knife. And Channing Tatum recently admitted to GQ that he's "high-functioning alcoholic," an admission that's just a little too casual for the content.

Wild Child: LaBeouf. Tatum says the new baby and the Magic Mike sequel have been forcing him to cut down on his drinking, but LaBeouf has gotten in trouble with the police a few times since then.

Of course, there's the famous incident in which LaBeouf wore a bag claiming "I AM NOT FAMOUS" on the red carpet. And Tatum's recent GQ profile reveals that he made a bet with 21 Jump Street costar Jonah Hill: if the movie made over $35 million at the box office, Hill would bestow a clothed kiss upon Tatum's nether regions.

Wild Child: Tatum. The bag wearing was at least rebellion with some sort of purpose, however misguided. But although Tatum knows that winning the bet is basically a lose-lose situation, he's still considering making Hill do it.

The ultimate test: which use of these actor's birthday suits was crazier? Channing Tatum's turn as a stripper in Magic Mike or Shia Labeouf's intimate nudity in the Sigur Ros music video "Fjögur Píanó"?

Wild Child: Both, of course. It takes, ahem, balls to bare it all in your career, especially since both projects were meaningful to the actors.