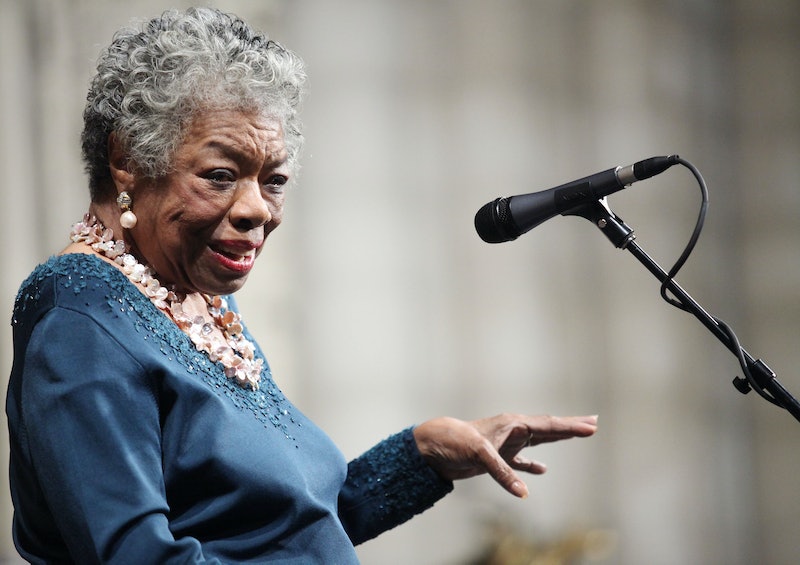 Poet, civil rights activist, and all-round legend Maya Angelou has passed away, her publicist said Wednesday. 86-year-old Angelou, the recipient of the Presidential Medal of Freedom in 2011 and one of the most influential voices of our time, died at her home in Winston-Salem, North Carolina. Angelou had reportedly been battling health problems, and had recently been forced to cancel a recent scheduled event; she was set to be honored with the "Beacon Of Life Award" Friday at the 2014 MLB Beacon Award Luncheon.

In her long career, Angelou was many things: a dancer, a poet, an activist, a dramatist, a filmmaker. She was also the recipient of more than 30 honorary degrees, and although she never attended college herself, she taught African-American history at North Carolina's Wake Forest University for years. She spoke more than six languages; had counted Martin Luther King and Oprah among her close friends; and received dozens of awards during an illustrious and inspiring career spanning more than 50 years.

Publicist Brann told ABC News: "She'd been very frail and had heart problems, but she was going strong, finishing a new book... I spoke to her yesterday. She was fine, as she always was. Her spirit was indomitable."

In a statement, Angelou's family said:

Dr. Maya Angelou passed quietly in her home before 8:00 a.m. EST. Her family is extremely grateful that her ascension was not belabored by a loss of acuity or comprehension. She lived a life as a teacher, activist, artist and human being. She was a warrior for equality, tolerance and peace. The family is extremely appreciative of the time we had with her and we know that she is looking down upon us with love.

Born April 4, 1928, Angelou rose from segregation and violence to become one of the first black writers to publish a bestseller, her universally acclaimed I Know Why The Caged Bird Sings. "I want to write so well that a person is 30 or 40 pages in a book of mine ... before she realizes she's reading," Angelou once said. The book became an icon of the civil rights era, and remains required reading in many American schools.

Angelou ultimately wrote seven bestselling autographies, and also penned poetry, plays, and screenplays, earning her the moniker "the black woman's poet laureate." She gave lectures frequently from the '80s until her death, and was the first black female director in American history. In 2011, Obama awarded her the Presidential Medal of Freedom — the country's highest civilian honor. At President Clinton's inauguration in 1993, Angelou recited her poem "On The Pulse Of Morning."

Angelou Tweeted poignantly for the last time May 23.

More like this
The Most Anticipated Books Of August 2022
By K.W. Colyard
Candice Carty-Williams’ New BBC Drama Will Be “A Love Letter To Black British Music”
By L'Oréal Blackett and Sophie McEvoy
Beyoncé & Madonna’s “Break My Soul” Remix Honors A Group Of Black Icons
By Stephanie Topacio Long
Kim Kardashian & Pete Davidson’s Relationship Timeline From Start To Finish
By Jordyn Tilchen and Bustle Editors
Get Even More From Bustle — Sign Up For The Newsletter