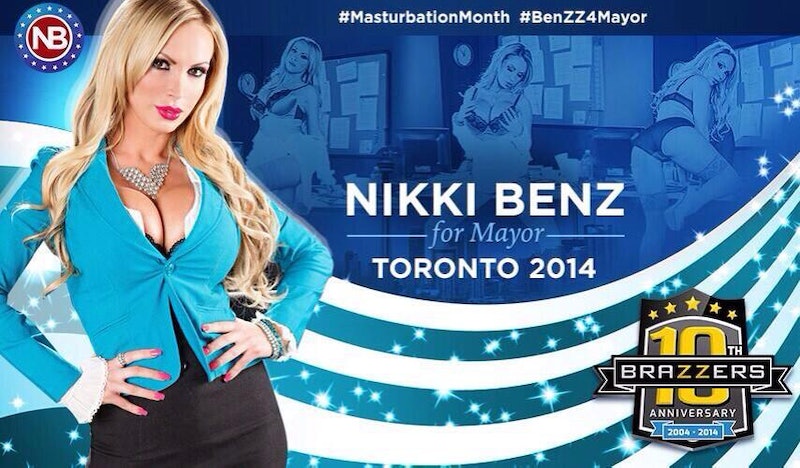 Because Toronto wasn't getting enough attention for the whole Rob Ford thing, the city's hogging the spotlight once more with its latest mayoral candidate. Adult film star Nikki Benz will run against Rob Ford for Toronto mayor, and has vowed to register at noon Wednesday. If "sex, drugs, and rock and roll" has become Toronto's motto, then all it needs to perfect the trifecta is for someone from Rush to join the race. (Neil Peart, are you listening?) For now, Benz will shake things up as she tries to take the title from the incumbent.

Let's take a look at how the two compare, starting with Benz's campaign video, which is basically a smorgasbord of sexual innuendos.

More like this
Every Single Big & Small Way You Can Fight For Abortion Rights
By Tess Garcia
5 Ways To Stand In Solidarity With Women In America From The UK
By Sophie McEvoy
How To Fight For Reproductive Rights, Based On How Much Time You Have
By Courtney Young
Police Shove 'Full House' Star Jodie Sweetin At An Abortion Rights Protest
By Radhika Menon
Get Even More From Bustle — Sign Up For The Newsletter