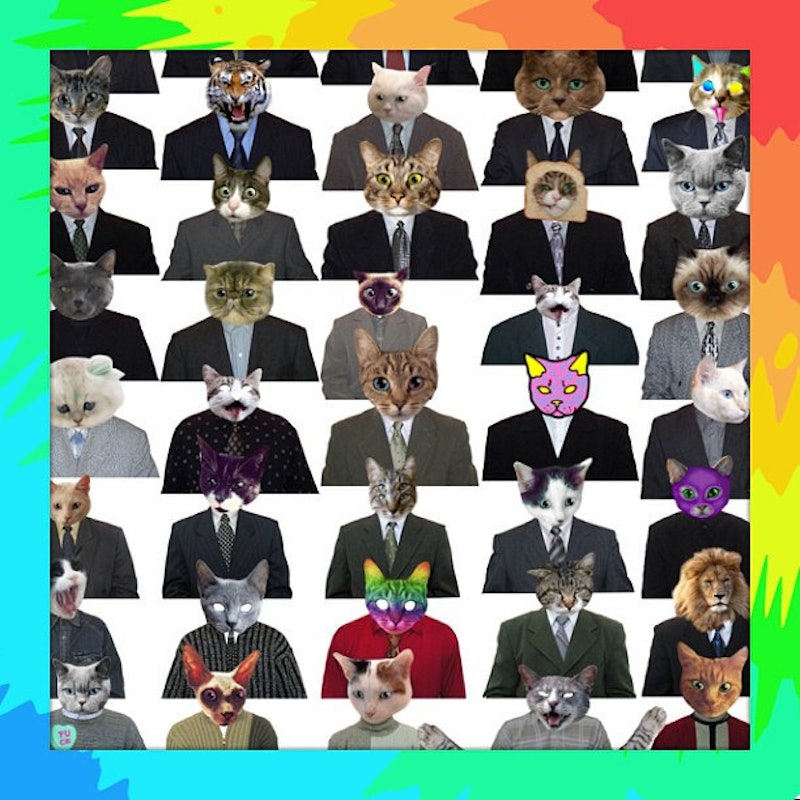 Looking for a new way to spice up your selfie game? Don't look too much further, because it's here — although probably not in the form you'd expect. The Catwang app, downloadable on both iPhone and Android devices, lets you add all sorts of — you guessed it — bizarre cat images to your DIY portraits. Some of the choices include fire-breathing felines, rainbow-hued kitties, and cats with laser beams shooting out of their eyes à la Superman.

Catwang is the bizarre, inspired creation of Franky Aguilar, a young, self-taught programmer who used to rake in a hefty $90,000 salary from Zynga. In 2012, he released the first iteration of the app, which was inspired by the surreal graffiti he'd once produced in high school. A month later, it had achieved 130,000 downloads. Next, Aguilar slapped a 99-cent price tag on his artwork. Soon, he was making $400 a day, and he left his job at Zynga for greener, cat-filled pastures.

The app is an underground success now, with 20,150 likes on their Facebook page. Search #catwang on Instagram or Flickr and you'll find a slew of odd, comical, and occasionally beautiful photos. Girls sprout multiple tabby heads; pizza or donut-shaded cats frame pictures like a border; men pose against walls, tiger faces applied to their bodies.

But Catwang is just one product of the digital sticker boom, an economy that, says sticker broker Evan Wray, could amount to more than $2 billion by the end of 2014. If you think about it, stickers are becoming far more common — have you ever used a Pusheen on Facebook? (If you're like me, you and your friends now have specific meanings for each Pusheen sticker.) Plenty of people use stickers when they're not sure what to say or they don't have time to type, according to the New York Times. Last year, Aguilar designed another app called Snoopify that sold a virtual joint, the Golden Jay, for $99.99. What's incredible is that people actually bought it.

So whether people are using these stickers to spruce up their selfies, communicate better, or add to their virtual cachet, looks like stickers are a trend that's going to be around for awhile. If the Global Selfie wasn't enough to get you going, you might want to consider these instead. As for me, I'll welcome this kind of funky cat paraphernalia any day.