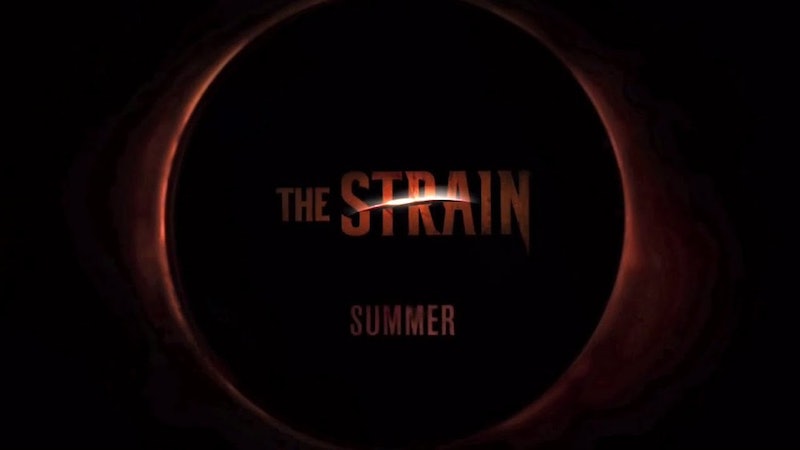 The first full trailer for Guillermo del Toro's upcoming FX vampire series The Strain is here, and it. is. disgusting. In a good way! After months of vague teasers and anticipation from fans familiar with the book series del Toro created with author Chuck Hogan, the trailer is super satisfying, even though it is still only thirty seconds long. But in that 30 seconds, we get some plot points: a plane lands at JFK, and all the passengers are dead — or are they? As is known from the books, four survivors aboard the flight are actually bloodthirsty, terrifying vampires, and they are not compassionate and kind to their human counterparts (nor are they waify, sensitive and sparkling) like Edward Cullen. Del Toro's vampires are bald, white-skinned with bloodshot eyes, and they use a stinger to prey on their victims. Even True Blood vampires would be like, "Ew."

Also in the preview is a look at "The Master," the 'he' that was being referred to in viral campaigns for the ad that proclaimed "He is Here." It's a totally inhuman, new look at vampires that is not familiar in any vampiric canon, which is pretty exciting. It's no surprise that del Toro, whose works include the stellar Pan's Labyrinth and Hellboy, is himself a master at manifesting twisted new creatures to haunt our nightmares. Of course, though this trailer is the most heart-stopping by far, I don't know if even del Toro's demented Master with his vampire stinger can beat the stomach-turning viral ad that features RAT KINGS.

The Strain premieres on FX on July 13.