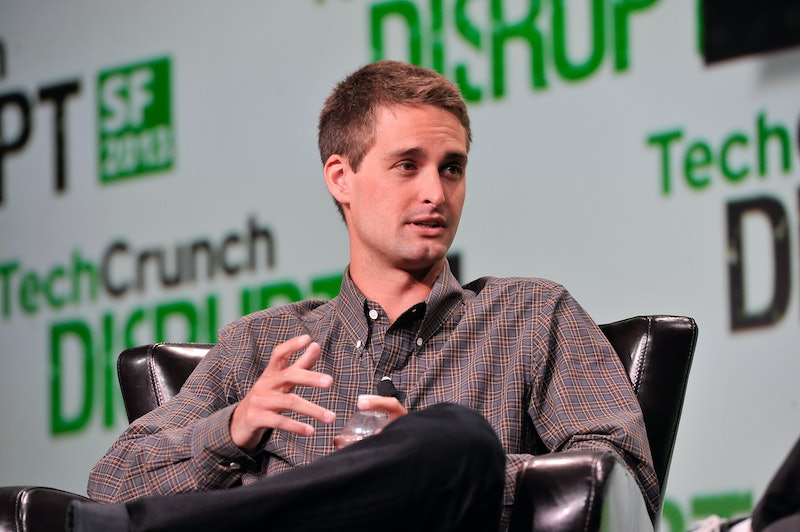 Evan Spiegel has made quite a name for himself as the CEO of Snapchat. Known for inventing the frattiest app in history, feedback on the brogrammer have not been kind: Spiegel has been called everything from brash and cocky to a spoiled LA brat, to a Silicon Valley sociopath. And now, Valleywag has obtained emails from Spiegel's fraternity days that confirm the already pretty obvious: Evan Spiegel is the worst.

The Spiegel that we know today, the guy who will forever be remembered for helping society sext more, comes from totally unsurprising roots. Just a few years ago, Spiegel was the most typical frat boy you can imagine. No, really. Picture a frat boy, any frat boy. Yup, that's Spiegel. As a devoted brother of Stanford University's Kappa Sigma chapter, Spiegel was a proactive guy, frequently sending emails to fellow brothers and coordinating ragers.

Some of the terrible things Evan Spiegel's known for, other than the whole Snapchat thing...

And in the emails obtained by Valleywag, we have learned that his current persona is not a facade.

Hey, he just wants the best for his friends, right?

So many gems in this one. I especially love all the train metaphors. "Can't wait to see everyone on the blackout express soon." The guy's a poet.

In case we haven't made it clear that he is the most face-punchable guy ever, Spiegel sent out this totally homophobic email to really drive the point home.

If he has the means to provide a kilo of cocaine, you'd think he could afford something better to drink than jello shots.

"Sororisluts." Not only is that not clever, but it doesn't even roll off the tongue.

"I thought the whole point was to shoot lazers at fat girls." Forget the face; this person deserves to be kneed in the groin.

"GAYTITTIES" and Dean Julie in one email? What does it all mean? Just FYI, Dean Julie was the dean of freshmen and undergraduate advising at Stanford at the time.

Now that we've had another glimpse into Spiegel's origins story, we've learned ... absolutely nothing. Nobody is surprised by his frat-days antics, judging by his modern-day antics.