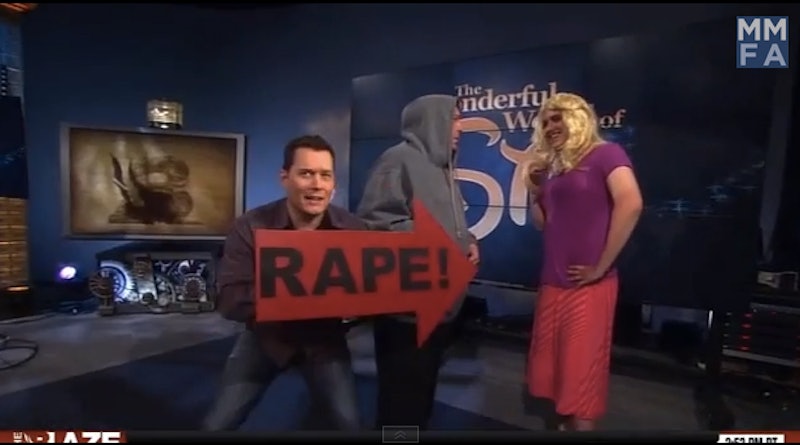 If there is one issue that could unite Republicans and Democrats, conservatives and liberals, it would be young people's safety, right? Wrong. On Tuesday, Glenn Beck's TheBlaze ran a series of skits that mocked rape. No, we're not kidding. Essentially spitting in the face of the federal government's efforts to combat sexual assault — particularly the White House's task force to protect students from the frightening statistic of one in five women being sexually assaulted in college — Glenn Beck and co proved, once again, that partisanship knows no bounds.

Last Thursday, Stu Burguiere, the executive producer and head writer of The Glenn Beck Program, published a blog post appropriately entitled "You might think Stu is anti-women after reading this." Strangely enough, Burguiere never assures his readers that he is not, in fact, anti-women, and instead seems to embark on a warpath against all survivors of sexual assault, attempting to debunk the White House's statistic that 19 percent of women experienced attempted or completed sexual assault since entering college. Burguiere then ends his post with a video of a series of skits that poke fun at sexual assault, and are meant to illustrate the inaccuracies of the one in five statistic.

Burguiere writes, "I want to let you know that I know challenging this (the statistic) makes me anti-woman," but then does make another "heartfelt disclaimer," in which he assures an already skeptical reader that he "never, ever, never, want[s] there to be a sexual assault ever, ever again." But he also seems to want everyone to know that women just aren't raped that much.

In his skit, Burguiere features radio host Jeff Fisher as the satirical rapist and a man in a wig as the supposed victim. (Maybe Burguiere was forced to use a man in a wig because no woman would subject herself to such an incredibly sexist and offensive situation.) Burguiere then proceeds to focus on the "misleading questions" the Department of Justice study used to determine the percentage of women who have survived sexual assault in college.

Burguiere was particularly offended by the following question: “When you were drunk, high, drugged, or passed out and unable to consent, how many people ever had sex with you?” (Emphasis ours). Calling the wording "incoherent" and "confusing" in his blog post, Burguiere writes that "it is possible to have consensual sex while drunk or high," using beer commercials as irrefutable evidence of this fact.

Of course, for Burguiere, a campus survey is faulty methodology, but the advertising tactics of alcohol producers is entirely reliable. He goes on to explain the logic of beer commercials, saying,

Yikes, Stu. Yikes. For someone so upset about supposedly unfounded statistics, Burguiere certainly isn't shy about making some bold assertions of his own.

And then comes his real coup de grace. Burguiere presents a series of skits in which a hooded man asks a wig wearing man (meant to represent a woman, ostensibly) to have sex with him, using horribly twisted versions of the scenarios presented by the 2010 National Intimate Partner and Sexual Violence Survey as fuel for his offensive fire.

Of the 22 questions asked in the six categories of the sexual violence portion of the study, Burguiere examines and mocks exactly two of the questions used by study conductors, having Fisher and the wigged man to act out ludicrous situations that are meant to reflect "telling lies, making promises about the future [known to be] untrue, threatening to end [the] relationship, and repeatedly asking for sex or showing unhapp[inness]."

After each scenario, Burguiere jumps into a scene, holding a large red sign that reads, "RAPE!" If only it were that easy to spot, Burguiere.

These situations, Burguiere says, are annoying, certainly, but do not qualify as instances of sexual assault. So really, he seems to suggest, women should just stop whining about being asked to have sex when they don't want to.

What Burguiere does not point out are the 20 other questions that are also used to gauge whether an individual has experienced sexual violence, including "using physical force or threats to physically harm you to make you have sex," "harass[ing] you while you were in a public place in a way that made you feel unsafe," and forcing "you [to] look at or participate in sexual photos or movies."

Of course, showing those in a skit would've been too much, even for Jeff Burguiere.

More like this
We’ve All Had Bad Sex. Nona Willis Aronowitz Is Talking About It.
By Sophia Benoit
'The Capture' Is Finally Back – & S2 Looks Tense AF
By Sophie McEvoy and El Hunt
The Lionesses Are Calling For Equal Access To Football In Schools
By Sophie McEvoy
Dunkin’s Pumpkin Spice Latte Is Officially Back This Week
By Mia Mercado
Get Even More From Bustle — Sign Up For The Newsletter