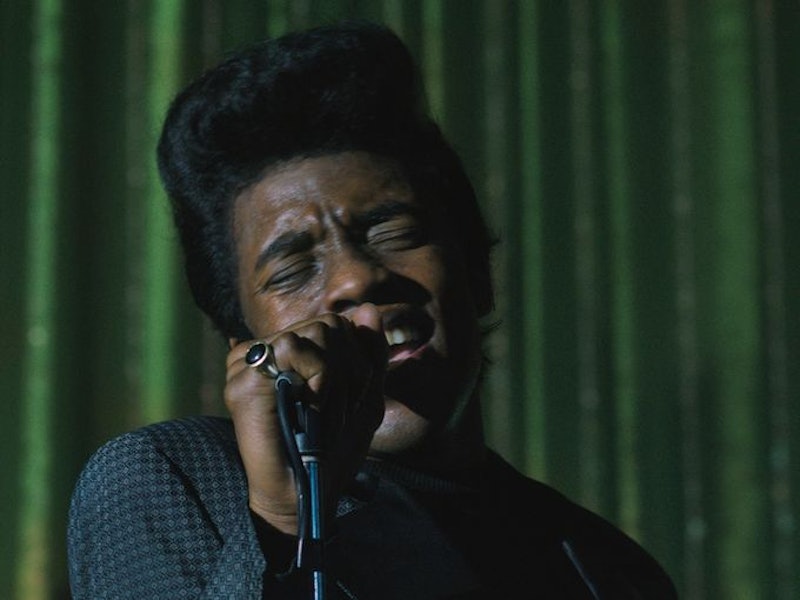 We may still be just scratching the surface of dumb fun summer movie season, but the trailer for Get On Up , the James Brown biopic slated for an August 1 release, may have just given us our first taste of the 2015 Oscar Season. The film, starring 42's break-out star Chadwick Boseman as the godfather of soul himself, boasts an all-star cast including Academy favorites Octavia Spencer and Viola Davis, as well as R&B legend Jill Scott and True Blood's Nelsan Ellis (that's right, if James Brown's manager looks familiar to you, it may be because you know him as Merlotte's own short-order cook/medium Lafayette Reynolds).

When you consider that they're being lead by The Help director Tate Taylor in a biopic of one of the most fascinating characters in American music history, and scored to a soundtrack of some of the most iconic songs of all time, it seems like it would be a pretty difficult situation to mess up.

Admittedly, it's a formula we've seen many times before, to varying degrees of success. A biopic about a great musician whose personal life was plagued with trauma, drug abuse, and difficult interpersonal relationships? For every Coal Miner's Daughter, there's a Beyond the Sea, and the disparity between the two is pretty devastating. When played well, though, the musical biopic is all but an Oscar shoe-in, and, it may be early, but Get On Up is going to be a film to watch, in every sense of the phrase.