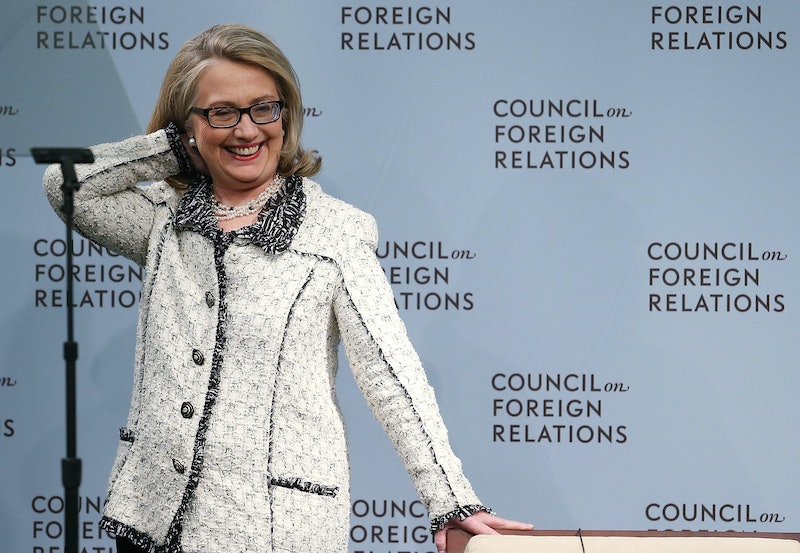 Hillary Clinton has a Twitter. And her avatar is the same photo of her aboard a C-17 made famous by the viral tumblr, Texts From Hillary. And as if that isn’t enough, her first (and so far only) tweet incorporates the hashtag #tweetsfromhillary.

In short, everything about this is perfect.

So, what kinds of tweets can we expect from the self-described “US Senator, SecState, author, dog owner, hair icon, pantsuit aficionado”? Here’s what I’m hoping to see:

1. Spousal banter with Bill, who welcomed her to the Twitterverse with this droll tweet:

I give it a maximum of a week before she surpasses his 718,000 or so followers.

2. 140 character bits of brilliance on women's and human rights. Remember her Human Rights Campaign video supporting LGBT marriage? Of course you do.

3. Tweets to the power players that made Texts From Hillary such a hit. Can you imagine the glory of reading exchanges between Hillary Clinton and Obama, Biden, Jon Stewart, or (jokes) Sarah Palin? So far, it's boring, but we can dream.

...Of course, what I'm really hoping to see is the announcement the world has been waiting for, Hillary's bid for the 2016 presidency--perhaps announced first to her loyal Twitter following? We know the mysterious "TBD" in your bio isn't just referring to your next book deal or the accumulation of more (fabulous) pantsuits, Madam Clinton!