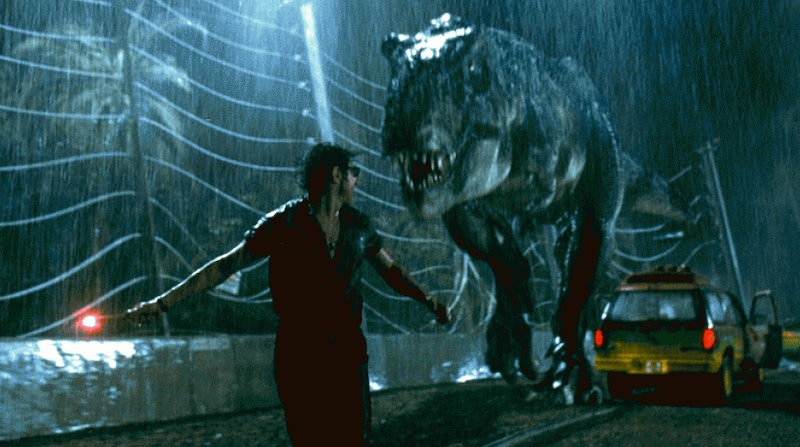 If you want to know practically everything there is to know about the big plot secrets of the long-awaited Jurassic World , you're in luck: Big chunks of major plot developments were recently leaked, heavily disappointing the crew of the film, who had been working hard to keep things under wraps until the film hit theaters in 2015. Alas, we live in 2014, where for many filmmakers the promise of a spoiler-free production is but a pleasant fever-dream. But hey, now that the secrets are out in the open at least we can all talk like grown-ups about it.

In case you missed it, here are some things we learned about what lies in store for Jurassic World. Keep in mind that these are things that the filmmakers very much wanted to keep in mind to preserve the movie-going experience, so read at your own peril (in other words, obviously spoilers follow):

Treverrow, disappointed by the leaking of the deets, was kind enough to respond to the blow by actually delving into even more about what could make Jurassic World one of our most-anticipated movies of 2015. You know, other than the general presence of Chris Pratt and dinosaurs:

Chris Pratt’s character is doing behavioral research on the raptors. They aren’t trained, they can’t do tricks. He’s just trying to figure out the limits of the relationship between these highly intelligent creatures and human beings. If people don’t think there’s potential in those ideas, maybe they won’t like this movie. But I ask them to give it a chance.

And the film really does sound like it's getting at some interesting aspects of humanity's impulse control issues and short memories — in a way that actually seems to expand and deepen what the first films got into, as opposed to just parroting them:

This film picks up twenty-two years after Jurassic Park. When Derek [Connolly] and I sat down to find the movie, we looked at the past two decades and talked about what we’ve seen. Two things came to the surface. One was that money has been the gasoline in the engine of our biggest mistakes. If there are billions to be made, no one can resist them, even if they know things could end horribly.

[...] What if, despite previous disasters, they built a new biological preserve where you could see dinosaurs walk the earth…and what if people were already kind of over it? We imagined a teenager texting his girlfriend with his back to a T-Rex behind protective glass. For us, that image captured the way much of the audience feels about the movies themselves. 'We’ve seen CG dinosaurs. What else you got?' Next year, you’ll see our answer.

You can read the rest of the interview and learn more about the film over at SlashFilm; it includes some interesting tidbits on those modified dinos.