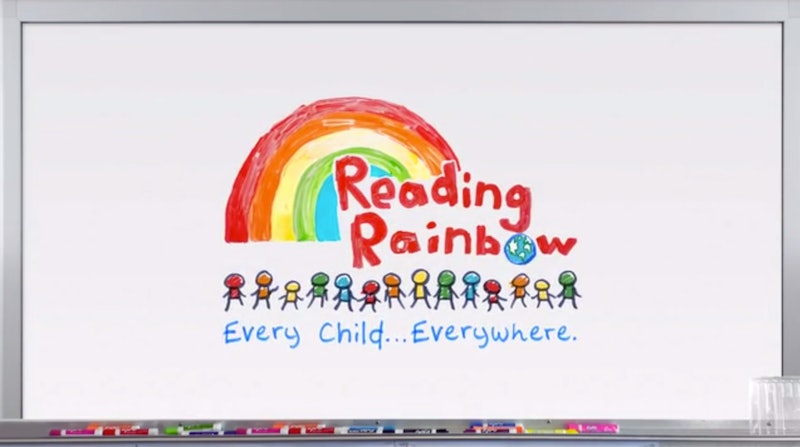 If there's one thing we all should have learned from the Kickstarter campaign that led to the Veronica Mars movie, it's that people can be very easily persuaded to throw money at nostalgic revivals. Reading Rainbow hosted by LeVar Burton was one of the many ways that children of the '90s learned how to read and when Burton announced a Reading Rainbow Kickstarter campaign, it's likely that even he thought people would need a little more convincing. Apparently just the idea was enough, as Burton's Kickstarter campaign reached its $1 million goal in the 24 hours since he first tweeted the news.

In fact, the campaign took less than 12 hours to reach its goal, becoming fully funded by the afternoon of the same day everyone learned about it. There are still 34 days to go in the campaign, but with his goal met on the first day Burton is encouraging anyone and everyone who still wants to contribute to feel free to do so. After all, having extra money on hand to put toward this Reading Rainbow revival is essentially guaranteeing that it will come back into the hands of children in the greatest form possible, am I right?

Reading Rainbow was more than just a children's show. It was a reading revolution. It's especially important in the digital age in which we live, where reading books seems to come secondary to movies or video games in a child's life. Not only will Burton's campaign expand Reading Rainbow onto the web so it's accessible to a wider range of children, but it will also give us a classroom version for the teachers and give copies of Reading Rainbow to low-income schools.

It's pretty much everything that you might want from a Reading Rainbow revival and certainly worthy of a Troy Barnes-level tearful breakdown. The Kickstarter might have already reached it's goal, but that's no reason to stop contributing for the month left in the campaign. For those who need a little more incentive, feel free to reacquaint yourself with the Reading Rainbow theme song.

More like this
Kim Cattrall Had A 'Sex And The City' Reunion With Creator Darren Star
By Grace Wehniainen
Shania Twain Replaced Brad Pitt’s Name In “That Don’t Impress Me Much” At The PCAs
By Jake Viswanath
17 Photos Of The 'Wednesday' Cast Vs. The 1991 'Addams Family' Cast
By Grace Wehniainen
The 'Kenan & Kel' Reunion On 'SNL' Took A Dramatic Turn, Thanks To Keke Palmer
By Brad Witter
Get Even More From Bustle — Sign Up For The Newsletter