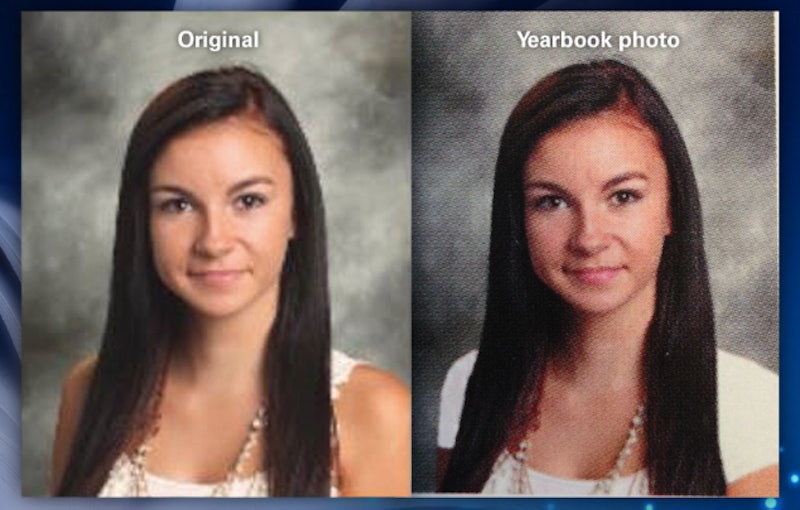 It's not unusual to have high school portraits touched up to hide blemishes, but how about shoulders and collarbones? According to FOX 13 News, a Utah high school Photoshopped the yearbook pictures of female students to make them appear more modest, because wearing a thick-strapped tank top is just showing way too much skin. The students didn't know their photos had been altered until they received the school's yearbook, giving them a big end-of-the-year surprise.

While most Photoshop disasters typically erase too much, leading to extreme thigh gaps or even missing arms, the photoshop fail of the Wasatch High School yearbook added too much. Tank tops became T-shirts, V-necks became boat necks, and undershirts were added to lower-cut necklines.

But what the students were most upset about is that the Photoshopping seemed random and inconsistent. In one case of two female students wearing nearly identical sleeveless denim vests, only one had sleeves added to her arms. Wasatch County Superintendent Terry Shoemaker said the school was acting in accord of its dress code.

“I feel like they put names in a hat and pick and choose who,” sophomore Rachel Russel told the news station. “There were plenty of girls that were wearing thicker tank tops and half of them got edited and half of them didn’t.”

According to the school district's dress code policy, clothing must be "modest, neat, clean" at all times:

The dress code policy also states that tattoos that are "extreme," "conspicuous" or "odd" are prohibited, which explains why the officials at Wasatch High School removed one student's tattoo from her portrait.

Several students told the local news station that if they had known their pictures were going to be edited, they would have changed their outfits. "They didn't give you an option to fix it," said sophomore Shelly Baum. "So you look funny in your yearbook picture."

Wasatch County Superintendent Terry Shoemaker admitted the school should have applied the dress code policy to each student. He added that school officials want to be more consistent next time to "help kids better prepare for their future by knowing how to dress appropriately for things."

However, Shoemaker said the students should have known they were violating the dress code. Uh, okay!

More like this
Most Comfortable Underwear For Big Butts
By Audrey Williams
Myra Magdalen Is TikTok’s Queen Of Chaotic Maximalist Fashion
By Sophia Moore
Linda Evangelista Leads Tributes To Iconic Fashion Designer Issey Miyake
By Sophie McEvoy
25 Things I've Reduced My Life To, In Addition To WFH In My PJs
By Ginny Hogan
Get Even More From Bustle — Sign Up For The Newsletter