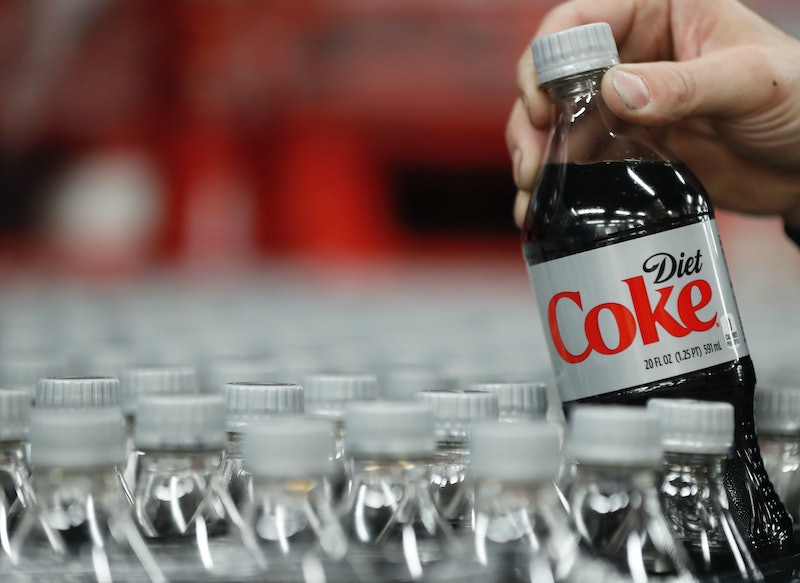 Some people may equate diet soda and weight loss, but not me. When you say Diet Coke, two things come to mind: Nancy Botwin (drinking it through a straw when iced lattes weren't available, of course) and cancer-causing fake sweeteners. Well, I might be getting it all wrong. Diet soda may be an effective way to shed pounds, a recent study suggests…sort of.

According to CNN, Researchers University of Colorado Anschutz Health and Wellness Center and Temple University’s Center for Obesity Research and Education observed a group of 300 participants — all of whom weighed an average of 200 pounds. The researchers split the participants into two groups: one of which drank diet soda during the study, and the other, water.

After 12 weeks, those drinking water lost nine pounds. The diet soda drinkers lost 13. Both groups stuck to the same diet and exercise regimen. John Peters, one of the authors of the study (published in the journal, Obesity ), explains that those in the diet soda group reported being less hungry that the water drinkers.

But of course, the study isn't flawless. There are two huge catches:

For one, the study was funded by the American Beverage Association — a company that just happens to sell diet soda. The other? The water-drinking participants were diet soda drinkers prior to the study, so they were basically giving up a hunger-satiation source that they'd previously relied on.

That, and there was only a four pound difference between the two groups (sorry, I guess that’s three catches).

Also, before you go ahead and...

...perhaps it’s time to bring up one of the biggest problems with diet soda: it’s loaded with aspartame, a commonly used fake sweetener. We’re all well aware that it’s not exactly a healthy alternative to regular sugar (other than the fact that it's basically void of calories). As FitDay notes, the ingredient been linked to several negative side effects, including diabetes and cancer (cancer!). Sure, it accounts for a slight difference in calories, a difference of about 140 to be exact, but cancer!

According to a study at Johns Hopkins (which was not funded by the beverage association) the weight-loss-via-diet-soda method only works for people who aren’t overweight. Researchers noticed that most diet soda drinkers tend to make up for those calories elsewhere.

So should you drink Diet Coke to lose weight? Probably not, seeing as it's not exactly healthy and could easily backfire in terms of calorie counting. However, giving it up might be a different story. Perhaps we should put the spotlight back on aspartame-free green juice.