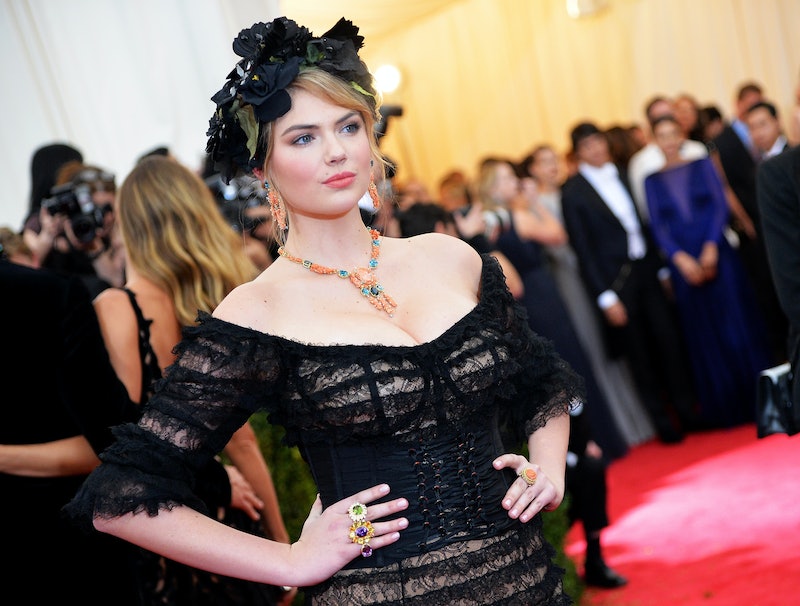 If you thought Kate Upton was stunning as is, I have some bad news — you're wrong. At least according to Elle , whose photo editor digitally enhanced her armpits because they just weren't flawless enough to be seen on the magazine's website. Gosh, Kate Upton, don't you know that you need perfect armpits if you're going to pose for Elle?

The photo features Upton in a sexy, probably-costs-more-than-your-mortgage swimsuit looking radiantly tan and radiantly blonde, as always. Her arm is flung up behind her flaxen head in that classic Baywatch beach pose with one horrific difference: a chunk of her armpit is missing. There is a legit crater-sized, concave gap where more armpit should be. If being trigger-happy with the editing tools weren't so harmful to the self-image of women, these gaffs would be hilarious. But it is harmful and I'm not laughing.

This image was run alongside an interview the David Kirsch, entitled "Kate Upton's Trainer Spills Her Fitness Secrets" on the Elle website (I've linked to a re-post by Harper's Bazaar because Elle is now featuring a different photo). OH GOOD let's interview a man about Kate Upton's body, because that's not something Upton should worry her pretty little head about. But don't worry: sexism is so last season. Here's a choice quote from the interview:

Do a couple of high intensity circuits a day. You aren’t going to be on the cover of Sports Illustrated or something, so the pressure isn’t there. Make time for one or two circuits first thing in the morning. No one can tell me they don’t have 10 or 15 minutes extra minutes a day. I don’t believe it. You don’t have to do 90 minutes.

Ok fine. That's some pretty good advice, especially since Kirsch acknowledges that you're not actually going to morph into Kate Upton working out 10 to 15 minutes some days of the week. However, it's totally undermined by the Photoshopped monstrosity pictured at the top of the article. Clearly, Kate Upton's look is not "attainable" because she doesn't eat gluten, pumps out waay more than 10 or 15 minutes of high intensity exercise, and gets her armpits Photoshopped. I think I'll stick with pizza and convex armpits, thankyouverymuch.

More like this
The $6 Drugstore Beauty Product Taraji P. Henson Uses Every Single Day
By Danielle Sinay
Sarah Jessica Parker Will Change Your Outlook On Aging
By Rachel Lapidos
12 Of Halsey's Makeup Looks That Are True Works Of Art
By Paris Giles
10 Show-Stopping Manicures From The 2022 BET Awards
By Paris Giles
Get Even More From Bustle — Sign Up For The Newsletter