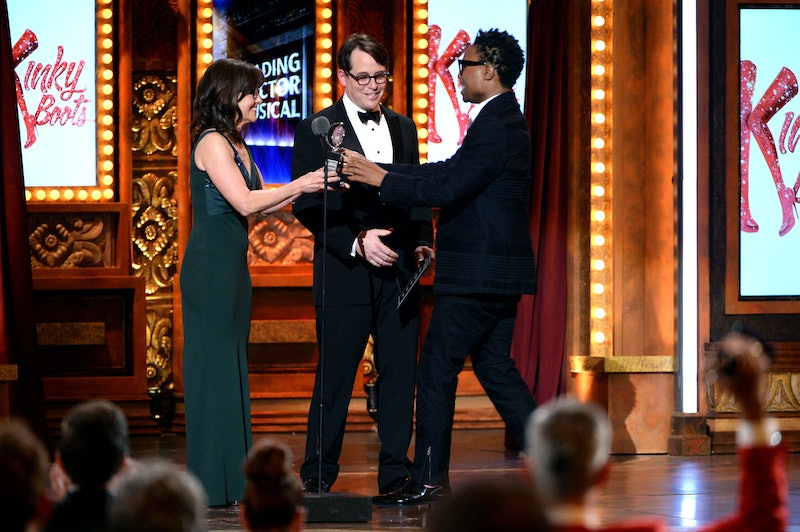 This year's Tony Awards are being lauded as a big win for women and minorities. Two women, Pam MacKinnon with Who's Afraid of Virginia Woolf? and Diane Paulus with Pippin, won directing awards while Cyndi Lauper picked up an award for her score for Kinky Boots. And, to boot (ha), four performers of color won awards: Cicely Tyson for her role in The Trip To Bountiful, Patina Miller for her role in Pippin, Billy Porter for his role in Kinky Boots, and Courtney B. Vance for his role in Lucky Guy. While this seems like a small victory, historically Tony Award recipients have been overwhelmingly white and male. Only four women have won for Best Director of a Play, with the first being in 1988, and only two have won for Best Director of a Musical, with the first being in 1991. The first wins for African-American performers were in 1982 (both were actors from the musical Dreamgirls), and aside from the category of Best Actress in a Musical (in which 27 percent of the winners were minorities), less than 15 percent of winners in every major category (Actor/Actress or Director of a Play/Musical) have been minorities.

But, unfortunately, such is the norm when it comes to awards shows. And the Tonys are hardly the worst offender when it comes to diversity. The Oscars have been notoriously criticized for snubbing minorities — they came so under fire that Reverend Jesse Jackson even organized protests against the awards show in 1996. There have only been four female nominees for Best Director, with Kathryn Bigelow finally winning the award in 2009. There have been eight awards given to three different female nominees for best screenplay. And in the past 20 years, there have only been 12 nominees for all the acting awards combined (supporting, actor or actress) that were minorities. Hattie McDaniel was the first person of color to win an Oscar in 1939 for her role as a slave in Gone With the Wind, but the Academy Awards haven't changed much since then — just take a look at 2011's The Help, in which Octavia Spencer and Viola Davis were nominated for the same "Mammy" type of roles. The very fact that a Google search for "oscars diversity" returns 1,610,000 results bemoaning the lack of diversity at the Academy Awards speaks volumes about the problem. But it's not a problem without cause — an investigative report by the L.A. Times in 2012 found that Academy voters are overwhelmingly white and male.

Looking to the small screen doesn't show much improvement, either. Only three women have won Emmys for directing a comedy or drama series, with Karen Arthur being the first in 1985. Women have more luck on the writing side, collecting 23 trophies in total for comedy or drama writing. African-American actors and actresses only do well at the Emmys if they're Billy Cosby — only seven have won awards in categories for the Lead Actor or Actress in a Comedy or Drama Series, and three of those awards went to Billy Cosby for I Spy (surprisingly, not for The Cosby Show).

While the Grammys have a smaller problem with women and minorities, they are not completely innocent. The Grammys have historically stuck with safe, musically conservative albums, which translates to women and minorities often getting overlooked. Just see 2013's Grammys, when Frank Ocean's popular and critically lauded Channel Orange was beaten out by Mumford & Sons, Gotye, and fun. And aside from the vocal performance categories, the rock genre of the Grammys is usually an exclusive boy's club despite compelling entries from female performers.

It's difficult to stack the awards shows against one another, since each boasts different categories. But if we could pick a worst offender by the numbers, the Oscars would be likely stick out most. But that's not the point: Every awards show has a problem with women and race, even today. And that problem starts from within Hollywood — white males still have a stronghold over the industry. And while getting more female or minority actors, actresses, directors and writers will be a slow process, much of the problem with award shows lies behind the scenes. Having female voters or voters of color at the Emmys, Oscars, and Tonys will help voters advocate for more diverse viewpoints. Won't it be nice when Sunday night's Tonys become the norm?