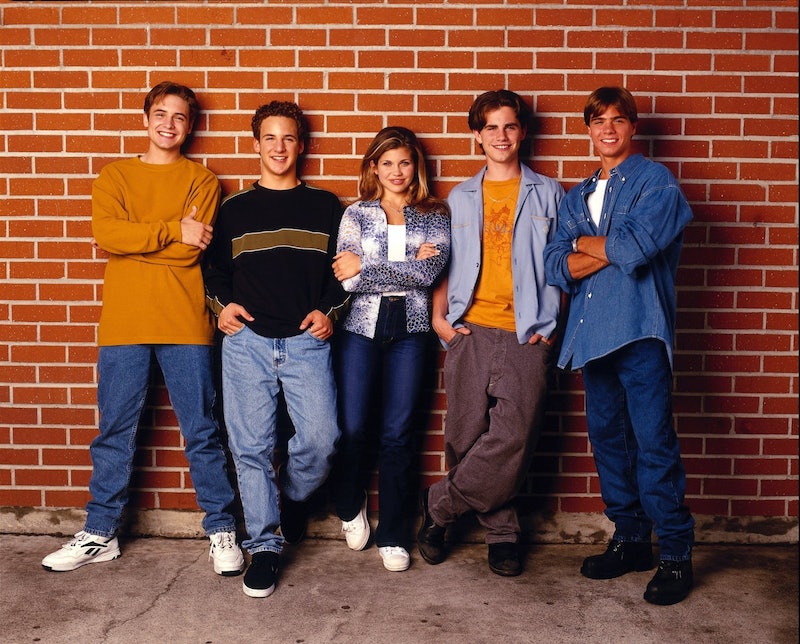 When news broke last year of a Boy Meets World follow-up series, Girl Meets World, I was sort of stunned by fan reaction. And when I write "fan reaction," I really mean "tweets from twenty-something friends." We'd all watched BMW as kids -- when it was part of ABC's TGIF lineup, at least to start -- and in the pantheon of 90s sitcoms, you could do worse. But I found it genuinely surprising to learn that this show had earned a place in our hearts alongside Full House, Saved by the Bell. Those were the entries that seem to transcend "TV show," more cultural signposts than anything else. What did BMW bring to the table?

With nothing else to watch these days, I found Disney Channel -- home of the upcoming Girl Meets World , which Alanna Bennett mostly liked -- airing old BMW episodes nightly. And Thursday's slate of classic season three episodes, "Hometown Hero" and "Truth and Consequences", offered a chance to see exactly what magic this show may or may not have had, and may or may not still possess. Here's what this reviewer, a BMW skeptic, stumbled across:

This isn't every sitcom today, but the bulk of them -- even those that would claim to do otherwise, like Modern Family -- trade on cynicism and emotional detachment to build their comedy. Maybe there's a beating heart somewhere, buried deep below, but the surface and subcutaneous layers of the current comedy landscape are just nowhere for sincerity or feelings. BMW wears its heart on its sleeve every episode. Is it sexy? God no! But it reminds you of a more innocent time and place -- the roots of nostalgia -- and makes you wonder why we don't see more of this brand of humor today.

Maybe this is just me, but I always found BMW to be among the cooler programs in the TGIF lineup. Full House was always dependable, sure, but not once did I watch an episode and think I was doing something bad, or learning something I shouldn't. The same went for Family Matters. It was Step by Step and BMW, really, that suggested a world beyond my PG living room -- a world in which boys and girls kissed, sexual feelings (whatever those are!) were discussed, sort of, and Cory Matthews could do shit like burn down a Chemistry lab that didn't scream goody-two-shoes. It's no surprise that Ben Savage is the younger brother of the actor who played The Wonder Years' Kevin Arnold, a character who to this day feels so much more alive than most teen boys on screen. Why? Because they weren't afraid to make him a flawed sometimes-dick. Cory Matthews is the same way.

All that you really need to know about Cory and Shawn Hunter's friendship is that they're friends. There's no gimmick underpinning their connection, no special circumstance that brought them together. They just...like each other and get along, even with obvious differences between them. Cory's an upper middle-class kid with his head in the clouds! Shawn's a low-rent street hustler (by comparison)! But they get along, and not in the shape of an "Odd Couple" pairing.

It boils down to this, doesn't it? Cory and Shawn and Topanga and Eric served as the teen engine by which all these stories were crafted, but it was always Feeny -- Mr. Feeny, Principal Feeny, Professor Feeny -- who guided the ship all the way to the series finale. He also got the last line of the series. Feeny was any wise mentor you ever had, any adult friend who shaped you in ways your parents never could. We all wanted a Mr. Feeny in our lives.