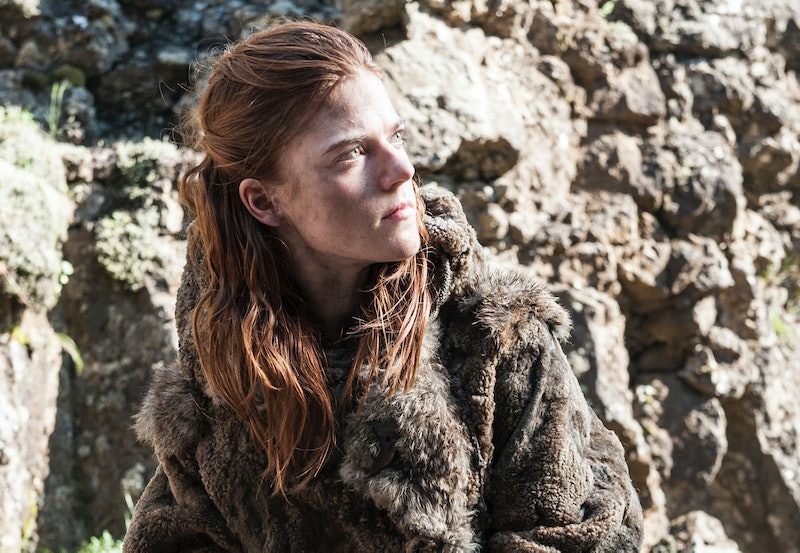 How do you solve a problem like Game of Thrones' Ygritte? She's beautiful, cunning, charming — and if you're Jon Snow, your mortal enemy/alternate universe lover. Last we saw Ygritte and Jon Snow together on Game of Thrones, she was semi-regretfully loading his thigh up with arrows as he escaped his life with the wildlings, back to his not-particularly-better life at Castle Black. Since then, we've gotten regular check-ins with the Night's Watch (everyone up top thinks Jon's ideas are dumb in that way that feels particularly foreboding), but only one more glimpse of Ygritte, and she seemed a little... bitter.

As the wildlings and Thenns tear though the north, slitting throats and eating arms, the most important stop on their Tour of World Domination and Crow Killing has become clear: Castle Black. That imminent convergence of crews seems ripe for a Jon + Ygritte = <3 reunion, but what will the two former love birds' reaction be to one another? We can all cross our little romantic fingers that Ygritte was lying when she told Giantsbane that the arrows she put in Jon's leg were meant to kill him, not with intention to let him live. And we can hope that Jon will spare Ygritte if the rest of the Night's Watch ever gets their shit together and lets him prepare Castle Black for an attack. But when you know Game of Thrones like we do, you know that "romantic" and "hope" are words you might as well retire.

The teaser trailer for this Sunday's episode makes it clear that the collection of wildlings leading the way for Mance Rayder's army, now led by Styr (scary, bald Thenn man), is about to reach Mole's Town, new home of Gilly, last stop before Castle Black. Let's look to the books for a reminder of what happens when Ygritte gets within an arrow's distance of Jon Snow again.

Spoilers ahead from A Storm of Swords, the third novel in George R. R. Martin's A Song of Ice and Fire series.

The timeline for Jon's return to Castle Black after escaping the wildlings has been slightly altered from A Storm of Swords. Mostly, that has meant moving a few plot points from after the wildling attack to before the wilding attack — Ghost's return, Jon's interrogation by Ser Alliser Thorne and Janos Slynt — but it's also meant the prolonging of Ygritte and Jon's not-so-happy reunion. In the book, there's not long between Jon's return to Castle Black and Styr's attack on it with Ygritte and the rest of his band of raiders. Unlike in the series, the Night's Watch takes heed of Jon's urgency in warning that Mance Rayder's army is on the way. This means that they're able to build a proper defense and hold off Mance's forces until they get some unexpected back up (I'm not going to get that spoil-y). Jon finds Ygritte on the battlefield during the first attack of the Thenns with an arrow in her, and she dies in his arms.

In the series, Jon isn't having much luck convincing the Night's Watch leaders that the wildlings are, indeed, on their way. With only three episodes left, the Battle of Castle Black will be a lot to pack in, and not something D.B. Weiss and David Benioff will likely want to split into multiple episodes. It seems likely that the Thenns will attack Mole's Town in Sunday's episode, and Jon might be able to finally convince the Night's Watch to prepare their defenses in time for their full attack in episode 9. The penultimate episode of each Game of Thrones season is known to be a doozy, and it might be the right time to prepare yourself for Ygritte's final exit. With the changes in timeline, there's always the possibility that Ygritte could live. But given the nature of the show, and Jon's impending steep climb up the Night's Watch's occupational latter, a spearwife was never really in his cards.