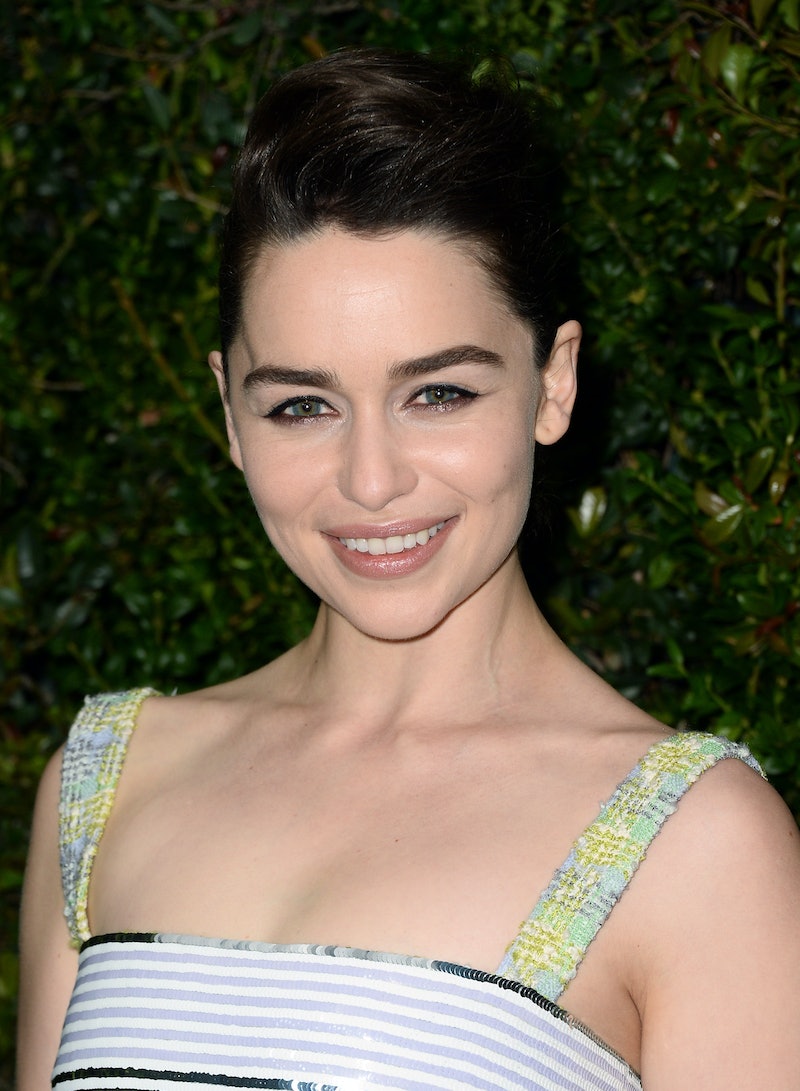 The Daily Mail released a set of photos this week from the shooting of Terminator: Genesis, which stars actress Emilia Clarke, known for her breakout role as Marianne in Futurama. In this film, the star will play the mother of a force capable of changing the world as we know it: John Connor.

And, yes, this marks a big moment for Clarke. While she has acted in the films Dom Hemingway (2013) and Spike Island (2012), I can't recall seeing this jumpsuit-clad brunette actress in much else of note.* Based on the photos from Genesis, however, it's clear that she is capable of playing a character who holds significant clout. Her stance is that of a born fighter, one who has had to survive countless attacks over the years due to her family name.

She looks comfortable alongside Schwarzenegger behind her, who is reprising his role as the Terminator. Yes, Clarke should have good chemistry with her older, more grizzled advisor, a man who was originally sent to overthrow her but who has since realigned his loyalties. I feel that, if she were tempted to take the bloodiest course of action to retake a strategic object that had been lost, he would help sway her resolve towards a more merciful route. It's something in his eyes, or maybe his jowls. He almost looks like a bear, come to think of it.

In addition, the costume design team for Genesis must be over the moon to dress the Triassic Attack star. In these photos, her blue jumpsuit really brings out the blue of her eyes and the deep, glossy, entrenched brown of her hair. Clarke looks at home in this outfit, and she could also slip into any number of strappy ensembles designed for ventilation, weapon storage, or sex appeal. They could even dress her in silks and leathers and accessorize it all with a throne, and Clarke would still look comfortable. What a shame, then, that no major television show thus far has taken advantage of her strength and versatility.

Finally, lest we forget, Clarke is portraying the mother of a force who will change the world: John Connor. I can only hope that, in Genesis, Connor and Kyle Reese (Jai Courtney) will have a loving relationship despite any potential brutality that draws them together. Perhaps, on the day that John Connor is born, Reese will be there, too. Hopefully he will be alive (since he wasn't in the original Terminator), but I would also accept him in zombie form or cryogenically frozen. It's always powerful when a young mother rises from the ashes of her former life as a stronger, more dangerous individual. Then again, if the plot is draggin' too much, they might skip the birth scene altogether.

Ultimately, the future is bright for Clarke! With some luck, and maybe with a change in hair color (I'm seeing her as a redhead, aren't you?), she should be in the game to win a part that truly showcases her talents. She was born for this, and it's time for the entertainment world to step back and let this brunette beauty take her place under the sun.

*But, seriously, the actress also known as Khaleesi is downright unrecognizable in those photos, no?