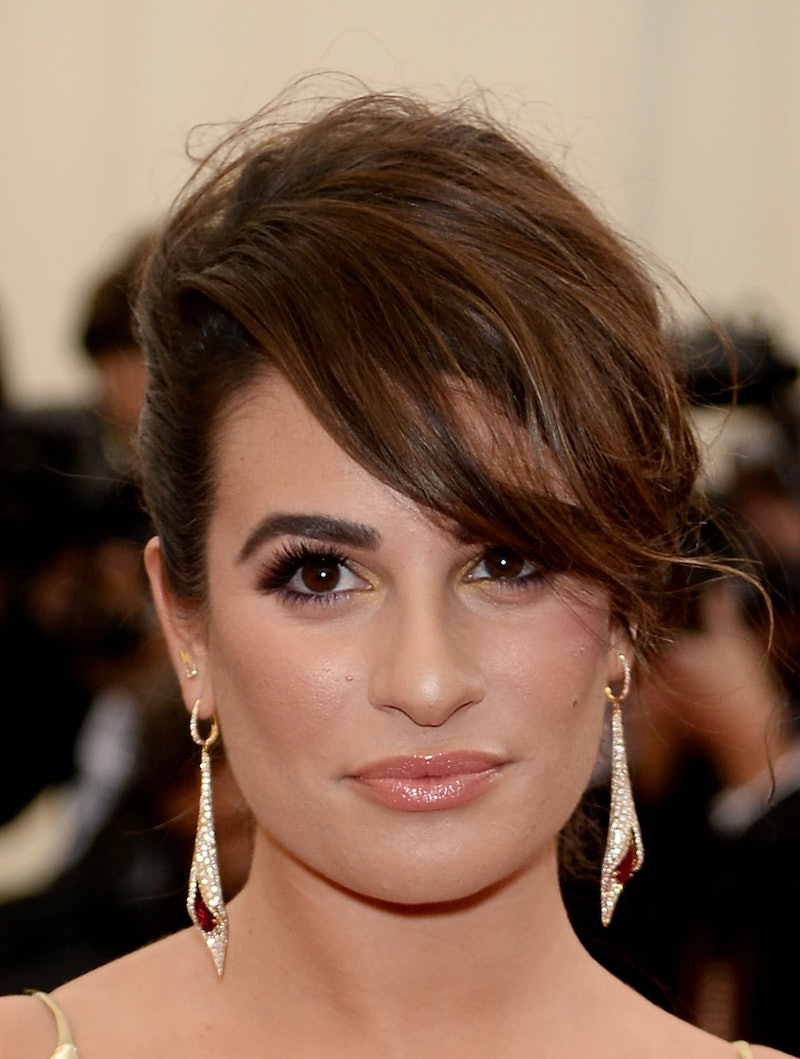 It’s no secret that Glee star Lea Michele doesn't have a perfect celebrity nose — but guess what? She doesn’t care. And that’s super refreshing. On Thursday, Michele stopped by Chelsea Lately to dish about her new book, Brunette Ambition. After talking about how she began drinking wine as a toddler (wha??), Michele revealed that her former manager once tried to convince her to get a nose job when she was just 13 years old. Oh, Hollywood. You never cease to amaze me.

Brava, Lea! Probably much like her Glee character Rachel Berry, Michele was too bashful to actually say the word “fuck” on television, but Handler went ahead and said it for her, later going on to highlight just how insane and ridiculous it was for an adult to advocate that a 15-year-old girl get plastic surgery. At that age, you’re still growing and developing! You have no idea what your face is going to end up looking like. What was going through this person’s mind??

Michele is beautiful. Yes, she has a large nose, but so what? I will admit: I laughed when Naya Rivera’s character Santana Lopez referred to Rachel’s nose as her “beak” (which she could supposedly use to crack hard seeds) on Glee, and I apologize for that, but all kidding aside, Michele’s nose totally works for her. It’s unique. She’s gorgeous.

And she sets a great example. As an adolescent, I was convinced that I needed a nose job. I have a big nose. It could probably be more accurately described as a “schnoz.” It has a bump. It’s also a little crooked. My nose was just one of the many things that I was constantly being made fun of for in middle school. “If I put my mind to it, I can probably lose weight,” I mused. Maybe then people would at least stop calling me a “fat faggot.” But what about my nose? “I’ll just have to wait until I grow up,” I thought. “When I’m an adult, I’ll have a great job, and like, a billion dollars, and I’ll finally be able to fix everything that’s wrong with my body… starting with my nose.” But it didn’t work out that way.

I did lose some weight, and, of course, I did grow up. I don’t have, like, a billion dollars in order to be able to fix everything that’s “wrong” with my body, but you know what? I like my nose now. It fits my face. It’s distinctive. I don’t think I would recognize myself if I went out and got one of those cute, perfectly straight noses you see all over reality television. Thank God I didn’t have the kind of parents growing up who would have even entertained the idea of me getting plastic surgery as a teenager. I really think I would’ve regretted it. Sure, there are still some things about my body that I’m not particularly fond of, and I may never quite turn that corner, but we’ll see. As they say, "I am a work in progress." Who are “they,” you might ask? Middle-aged divorcées, mostly. And now, me.

Personally, I don’t have anything against plastic surgery. Obviously, I think that fully grown, mature adults should really think carefully before taking the plunge, but if there’s something about your body that you don’t like and you genuinely believe that you’ll feel better by changing it, why the hell not? Who am I to stand in the way of someone else’s happiness? Still, there’s something to be said for learning to embrace your strange, poorly proportioned, awkward body in all of its splendor and magnificence. (Your body may not be all of those things, but I’m pretty sure that mine is.) The road to total and complete self-acceptance is a long (possibly endless) one, but I think you end up learning a lot of valuable lessons along the way.

Kudos to Michele for sticking it to that crazy old manager of hers — she didn’t need a nose job at 15 years old and she certainly doesn’t need one now (though if she ever decides to get one in the future, that’s totally OK, too). I’m glad to see someone else (a celebrity, no less) standing up for their imperfect nose. After all, as Hannah Montana once famously said, “Nobody’s perfect, I gotta work it!” Words to live by, to be honest.

More like this
A Week In The Life Of Celebrity Makeup Artist Vincent Oquendo
By Jordan Murray
All The Products Hailey Bieber Used For Her Birthday Makeup Look
By Olivia Rose Ferreiro
Bustle Daily Newsletter: November 22, 2022
By Hayley Schueneman
Kim Kardashian On The Beauty Hack That “Changed My Life, My Skin, My Confidence”
By Taylor Jean Stephan
Get Even More From Bustle — Sign Up For The Newsletter