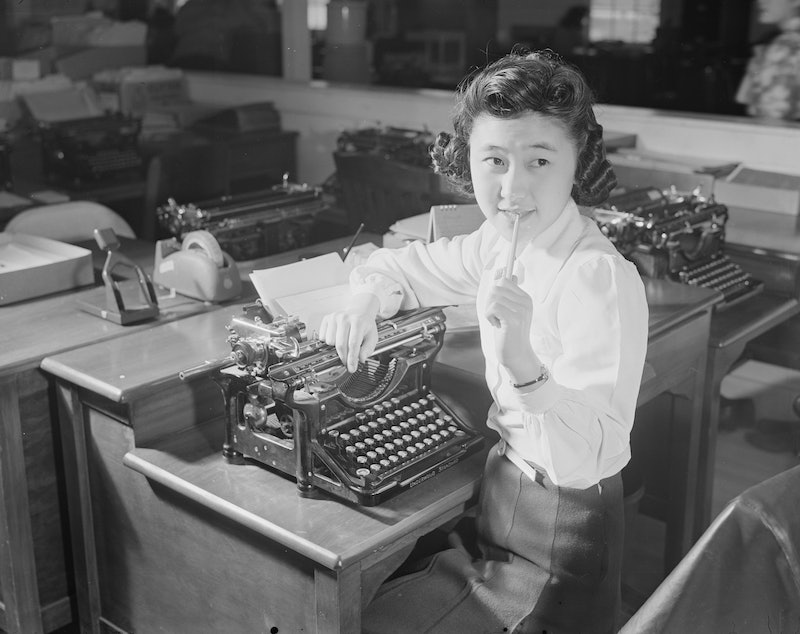 Are you a woman who works? Well, you can thank the typewriter for introducing women into the office and paving the way for female workers. At least this is what Lucy Kellaway, Financial Times columnist, is arguing in BBC News Magazine .

Here's what you may not have known: Typewriters were first introduced into the workplace in the late 19th century, and the ease with which they could be used made them suitable for female employees. In a 1888 Manual of the Typewriter, John Harrison explained, "The typewriter is especially adapted to feminine fingers. They seem to be made for typewriting. The typewriting involves no hard labour and no more skill than playing the piano." Patronizing, yes, but at least it got ladies into the workforce.

And that should've been awesome news for women, right? Well, not entirely. The typewriter was actually a handy tool for men to bring cheap female labor into the workplace to do the tasks they were tired of. Typewriting office ladies were mostly kept hidden in a room, quite separate from the male workers (God forbid men and women should mingle, threatening a lady's morality). Kind of like an all-female office subculture of underpaid and bored employees – sounds like our 21st century female secretaries and assistants.

You might think men at the time were happy for these new working women typing away, unnoticed in a corner, taking on the most boring tasks for lower wages. Yet men were actually pretty miffed about this change, since they saw these women as a new source of competition. Yup. Men were afraid of us working because we might take away their jobs. Sounds familiar? But, in the long run, bringing women into the office paid off for the male bosses, especially because of the pretty low glass ceiling. Women were rarely promoted, and often left early on as they married off — in many cases, to men they worked with (so much for keeping the sexes apart).

Paid half of a man's salary for tedious work and no recognition or possibility for advancement: This was the case back then, and stingingly, though we're talking about the past, the words don't feel too foreign, do they? Today, female workers are still too often relegated to the least intellectually-challenging jobs. "In offices today almost all the most boring tasks are done by women," says Kellaway. "At the photocopier, at the filing cabinet (or its digital equivalent) and on the reception desk — it's females only."

Decades after the groundbreaking introduction of the typewriter, allowing women into the office for the first time, we still have a ways to go before the progressively higher glass ceiling is completely eliminated. And, yes, before you ask, we're all leaning in so far, we may fall over.