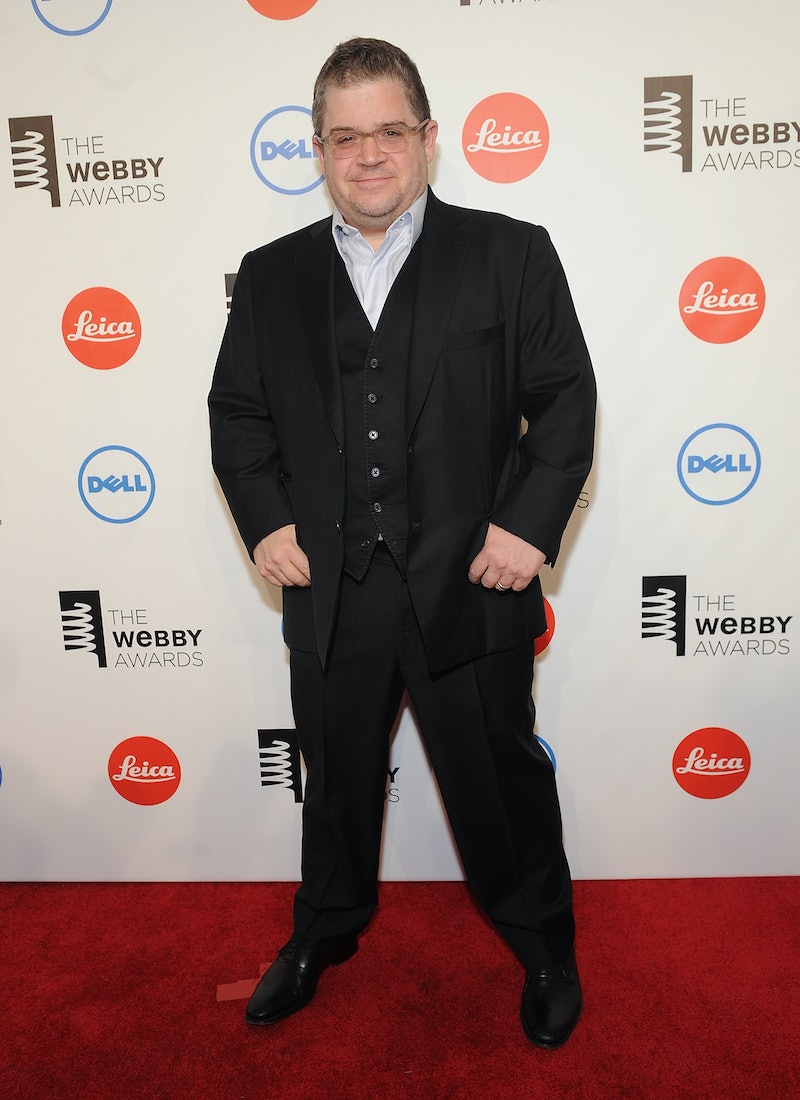 Patton Oswalt, actor, stand-up comedian, and Twitter personality, is taking a break from social media for the summer. The King of Queens actor wrote a post on Facebook explaining his decision, and, if your attention span is long enough, it is worth a read. What could have inspired this hiatus? Recently, Oswalt made waves on Twitter for addressing his Men's Rights Activist (MRA) followers regarding the hashtag #YesAllWomen.

On May 30th, he tweeted, "Fellow nerds: y'know how mad we get when jocks confuse Marvel & DC? Women feel that way when men confuse rape with sex (x1000)." A Twitter battle raged, as Oswalt defended his comment against backlash from both sides of the issue. He explained his aim in a subsequent series of tweets, writing, "I was trying to speak directly to all of the MRA dolts in my feed and all their disgusting reactions to #YesAllWomen." In other words, he was trying to instill a sense of sympathy in his followers who couldn't accept that women routinely feel unsafe or dehumanized in their interactions with men in public.

While this Twitter maelstrom is not Patton's first, it is useful to read his exit letter in the context of recent events. He writes that, while reading The Rebel by Albert Camus, a line jumped out at him.

"I've become my own tyrant -- Tweeting, and then responding to my own responses, and then fighting people who disagree with me. Constantly feeling like I have to have an instant take on things, instead of taking a breath, and getting as much information as I can about the world."

He is not alone. Many adults, myself included, can empathize with the feeling of falling down a "rabbit hole" into Facebook or Twitter, where the minutes stretch into hours. There is a certain feeling of loss, or, as Oswalt refers to it, a "slippage" of the psyche, that accompanies the act of taking seven Buzzfeed quizzes in a row. Diving into a deep stalk on Facebook yields plenty of embarrassing photos, but it brings the absence of that person even more strongly to the forefront of one's mind.

In her 2012 Ted talk, "Connected, but alone?" Sherry Turkle discusses how we can be "alone together" via our technology, and how we have learned to selectively listen in social situations while escaping into our phones. There is a disjointed quality to human interaction when you add texting and email. Where there was once a comfortable gap in conversation, a moment of silence during a lull in the chatter, there is now a collective moment of prayer, a communal bowing of heads as everyone reaches into a pocket or purse to check their phone. This happens at parties. It happens at dinners. It even happens during phone conversations, when a text pops up on the screen. Turkle states, "Human relationships are rich, and they're messy, and they're demanding, and we clean them up with technology. And when we do, one of the things that can happen is that we sacrifice conversation for mere connection." Stephen Colbert once asked her, "Don't all those little [Twitter] sips add up to one big gulp of conversation?" Her answer, and Oswalt's answer, is a definitive "No."

Turkle moves on to discuss other effects of this increasing disconnectedness, and mentions a study in which people expressed interest in a version of Siri that was more like a best friend than a mere assistant. Enter Her. When I watched it in theaters, I had a strong reaction to the aesthetic beauty of the film, but also to the idea that our most profoundly human connections and emotions could be directed towards an operating system. This film derives its power from its portrayal of a world that is uncomfortably close to our reality. Even the protagonist's job reflects our emotional disconnect: a modern Cyrano de Bergerac, he composes heartfelt letters between lovers, family members, and friends. They have lost the talent and knack for writing their own emotions, so he writes emotions for them.

What can we do to counteract this potential slide into asocial communion? Oswalt writes, "I want to de-atrophy the muscles I once had. The ones I used to charge through books, sprint through films, amble pleasantly through a new music album or a human conversation. I've lost them -- willingly, mind you. My fault. Got addicted to the empty endorphins of being online." He is taking a summer off, extracting his being from his online outlets, and working on face-to-face or face-to-page interactions. He writes, "I need to dry out, and remind myself of the deeper tides I used to be able to swim in -- in pages, and celluloid, and sounds, and people."

This brings me to one of my favorite Louis C.K. diatribes of all time, regarding cell phones. He says, "You need to build an ability to just be yourself and not be doing something. That's what the phones are taking away… That's being a person." The urge to text while driving, he states, results from a deep existential fear of being alone.

C.K. states, "You're lucky to feel sad moments," because, if you don't let yourself experience true sadness, "You never feel completely sad or completely happy. You just feel kind of satisfied with your product, and then you die." Instead of texting while driving, people should be able to let that sadness hit them, pass through them, and drag the happiness antibodies behind it.

Ultimately, this message is not new. We've been clicking through to read articles about it for years. If you've made it through this article, however, you have the opportunity to shut off your computer or put down your phone. It is sixty-five degrees in Boston, right now. There is a tree of aggressive birds right outside my window. I can hear children playing across the road, screaming as they run through a sprinkler. I have two letters to finish today, and I look forward to reading them over and seeing my physical work on the page. You are not here with me, but you can take your own break from the internet. And, if you have nothing better to do, I suppose you can always follow me on Twitter.

More like this
The Real Reason Your Instagram Story Viewers Show Up In That Order
By Emma Carey
Behind The Hilarity Of The "POV: You Walk Into My Room" TikTok Trend
By Lexi Inks
Why TikTok Is Flooded With Controversial Videos About "Pick Me Girls"
By Courtney Young
How Alexia Del Valle’s Latinx Roots Influence Her Content
By Alexis Morillo
Get Even More From Bustle — Sign Up For The Newsletter