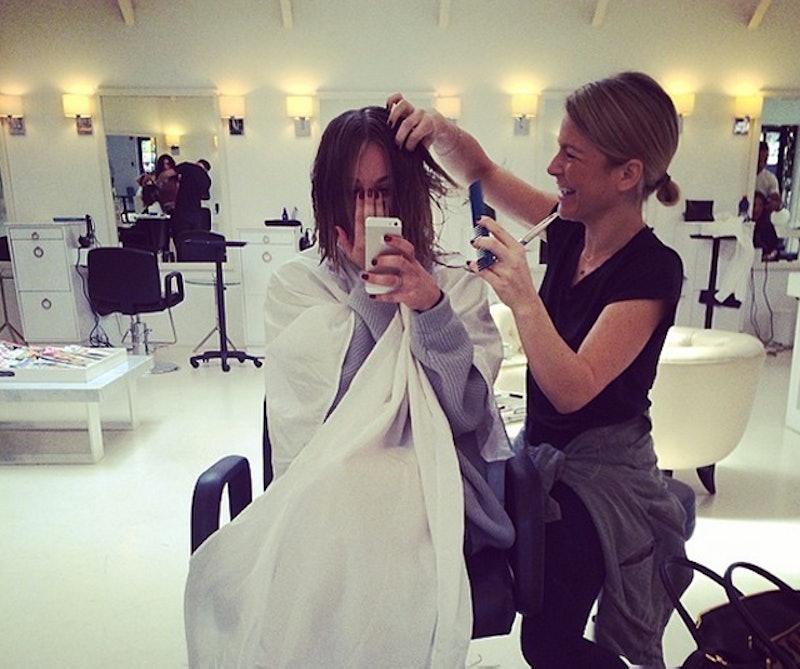 I sigh every time I see a headline or an article proclaiming that one celebrity defined the pixie cut for modern times. It was Michelle Williams — no, it was Miley Cyrus — no, it was Beyonce — no, it was Jennifer Lawrence! Poor Kate Gosselin gets left out every time. Still, sometimes it's undeniable that a hair trend's bubbled up in Hollywood — and, consequently, in the real world, too — and it seems like everyone's lobbing off their hair these days. The latest to chop their hair is one Kaley Cuoco.

The ones who aren't growing out their previously chopped pixies a la Jennifer Lawrence seem to be cutting it to lengths that easily could be a grown-out pixie, creating the illusion that the varying lengths of bobs making the rounds right now are the great equalizer of ladyhair. I mean, Hilary Duff just went bob, as did Mandy Moore. I'm even rocking a bob as I type this, less because I'm a celebrity trendsetter and more because I got a little flat iron-happy last year and chopping it off just made sense. "Shortish" seems to be the official celebrity hair style of the summer is just a crazy random happenstance, but hey, at least I'm kind of on-trend for once?

Now Cuoco's added her own slightly shorter "Peter Pan" style 'do to the mix, pretty soon after she debuted a slightly longer edgy bob.