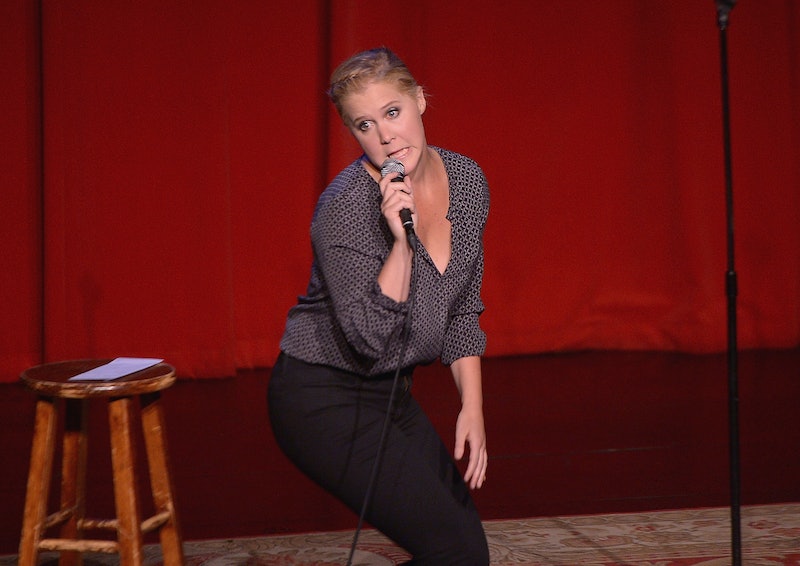 On June 1, 1981, the heavens opened up and a single beam of light skittered down to the earth. It traversed New York City until it located the hospital in Manhattan where one Sandra Schumer was giving birth. A baby girl came into the world and was bathed in its golden glow, at least for the first three seconds of her life. A voice boomed from above, intoning the words, "Sorry, wrong address." The light shut off, and baby Amy Schumer was plunged into abrupt darkness. She has remained there ever since, which is why Amy Schumer's blend of humor has the deliciously dark bite of celestial rejection. Today, on the 33rd anniversary of that date, we are here to celebrate the life and lines of Amy Schumer.

Schumer gained fame when she competed in Season 5 of Last Comic Standing, which aired in the summer of 2007. She placed fourth, and went on to co-star in the reality show Reality Bites Back in 2008. Schumer has since appeared in a number of commercials and shows, and her talents range from endorsing Butterfinger to lambasting the character Adam on HBO's Girls. In 2013, she launched her Comedy Central show Inside Amy Schumer, which consists of sketch comedy interspersed with clips of her stand-up. The series is now in its second season, and Schumer shows no sign of growing weary or less biting. And, without further ado, here are some of her best lines, sketches, and general states of being. Happy birthday, Amy, and may you perform until you are eighty-three.

This clip is not for the faint of heart. In it, Schumer plays the sadistic, over-the-top editor of a women's magazine who is looking to finish off a list of "500 Sex Tips to Drive Him Wild." Apart from the absolutely ridiculous suggestions that she fields with a straight face, my favorite part of this clip may be Schumer eating a single spinach leaf as if it were a miniature taco.

Schumer takes shallow to another level with this bit, layering one superficial action on top of another until she emerges, like a phoenix from the ashes, as the most heartless girlfriend to walk the face of the earth. She tells the audience, "I just threw [my boyfriend] a surprise party. It wasn't his birthday, but I wanted a really fun way to tell him he had HPV."

"I love joking about race."

In this clip, Schumer starts out with the Colbert-esque statement, "I was hanging out with all my black friend," and what follows is a spot-on impression of that person at the party who starts with "I'm not racist," and proceeds to swallow their entire foot. While conversations about race should not take place in the comments section of YouTube, some can be sparked by the right mixture of self and societal criticism in a comedy routine. One hopes.

When she attempts to buy a shirt from Urban Fitters, Amy finds herself unable to describe the man who helped her without offending the cashier, Sasheer Zamata. Schumer nails racial discomfort with the line, "I would guess he probably voted for Obama. I know I did!"

In a callback to her days on reality television, Schumer competes on a dating show. Her fellow contestant asks, "You guys slept together already?" to which Schumer replies, "No… I mean, yeah, what do you consider sleeping together? Isn't that what this show is?" That line captures The Bachelor in a nutshell. At the end of the day, Schumer goes home with her true love: curly fries.

Ultimately, Schumer's greatest strength is caricature. All of her characters are sourced from inner nuggets of truth that, when expanded upon, reveal the uncomfortable realities we can face in life, in reality television, and in our relationships. That awkward moment when you confuse one black man for another. The overwhelming sympathy that you feel for the fragile, this-is-the-most-important-moment-of-my-life contestants on dating shows. The uncomfortable fact of women who date men for their money. She brings these characters and feelings to life with her own twist, and we love her for it. It's been a great thirty-three years, and here's to at least thirty-three more!

More like this
At 28, Melanie C Was Falling In Love & Reclaiming Her Confidence
By Olivia-Anne Cleary
Shonda Rhimes' Net Worth Makes Her One Of The Wealthiest People In TV History
By Hugh McIntyre
The Best 'Grey's Anatomy' Intern Moments, From MAGIC to Glasses
By Grace Wehniainen
'The White Lotus' Season 2 Trailer Teases Multiple Affairs & Another Dead Body
By Bustle Editors
Get Even More From Bustle — Sign Up For The Newsletter