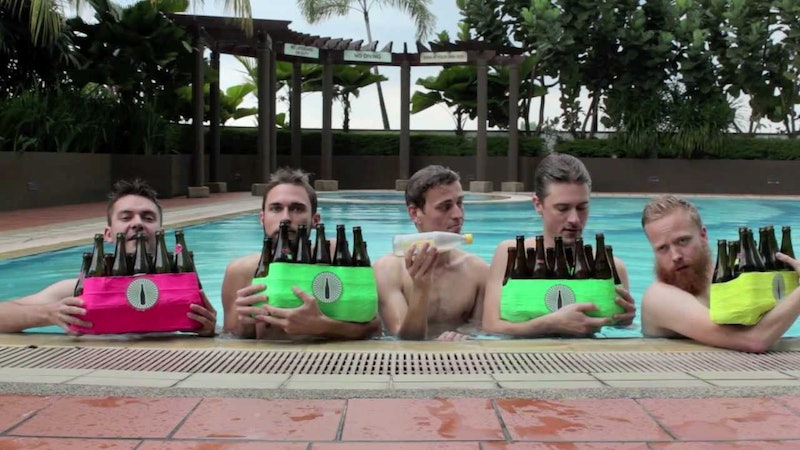 As Hamlet so eloquently put it, something is freakin' awesome in the state of Denmark (or, you know, something like that). The Bottle Boys, who in fact hail from that hallowed place, are making waves across the sea and domestically with their inventive covers of popular songs. These "boys" would even put the ultra cool Ms. Cups herself, Anna Kendrick, on the defensive because they are ready and willing to take over her reign as supreme ruler of the kitchen utensil musical genre. Their weapon of choice? Beer bottles. Seems simple, but when you actually watch them perform, you know that their method of madness is far from easy. The Bottle Boys have some seriously unconventional talent flowing through their musical veins. They're a lot like the Blue Man Group except danish and like, they're not as blue.

The latest beer bottle cover that is sweeping the internet is their rendition of Michael Jackson's "Billie Jean", that would even make the most sincere Michael Jackson loyalist question their allegiance. Perhaps half of their allure is that they sound good and look like they're having an absolute blast while doing it (they aren't too rough on the eyes, either). The Bottle Boys are by no means new on the musical scene. They've covered a plethora of beloved musical hits from Disney's The Little Mermaid tune, Under The Sea, to Christmas carols, to techno beats. And, we assure you from experience, once you begin watching their cover videos you won't be able to stop.

You can check out The Bottle Boy's version of "Billie Jean" below: