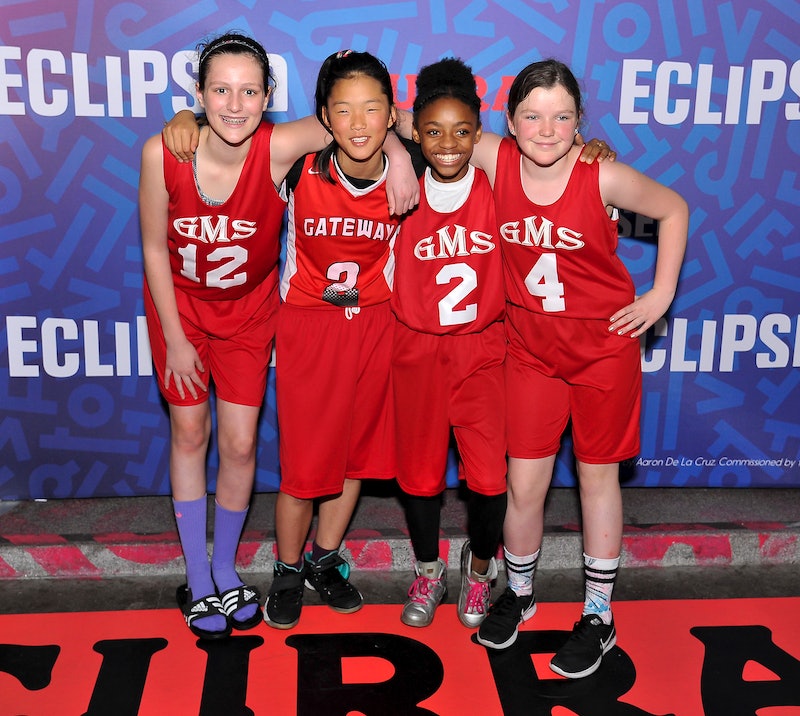 Jennifer Mathieu's debut novel The Truth About Alice (Roaring Brook) is the type of novel that gets banned by conservative schools across the U.S. — and I mean that in the best possible way. Mathieu's book, released Tuesday, delves into the heads of five high school students to address the very real, very present concerns of bullying and slutshaming, and it does not hold back.

Alice Franklin might not have been the most popular girl in school — that title was reserved for her friend Elaine O'Dea — but she wasn't a social outcast by any means. That was before the two incidents. As Elaine says at the beginning of the novel, there are two absolute truths about Alice: She slept with two people the same night at a party in Elaine's house, and one of those guys, Brandon Fitzsimmons, died in a car accident that was Alice's fault.

Of course, as is the case with high school rumors, these aren't actually the absolute truths. But that doesn't really matter, does it? Alice is bullied relentlessly, and she becomes a pariah in the school and even throughout the community.

The Truth About Alice is told from four alternative perspectives: Elaine O'Dea, Alice's former best friend Kelsie, Brandon's best friend Josh, and social outcast Kurt. Alice herself steps in for the final chapter to give her perspective.

Not hearing from Alice until the end gives readers a similar sort of experience as someone in her class, hearing these things about Alice and making their own judgement on who she is and why she did things and what happened, without honestly knowing the truth. It's a extremely effective tactic from Mathieu.

The only downfall from this account of bullying is that it doesn't include cyberbullying in any form, which seems like a missed opportunity in this day, where accounts of it are in the news every day. Though I can see how opening the world of social media could be a whole different can of worms.

1. You will start to feel gaps forming between you and your peers

In elementary school and to a lesser extent middle school, you and your pals were mostly on the same wavelength. But when it comes to high school, discrepancies in your levels of experience, sexually and with alcohol and drugs, can form cracks in your relationships.

When sex was introduced into the equation between best friends Alice and Kelsie, jealousy, judgement, and resentment drew the girls apart. These feelings can breed insecurity, which can lead to slutshaming and bullying. And, like queen bee and head bully Elaine O'Dea, girls doing these things convince themselves they are justified in their actions because of the actions of the one being bullied.

2. Sticks and stones may break your bones, but words hurt much, much worse

Just ask Alice Franklin. The old adage seems foolish in the age of bullies who torment people so relentlessly that they believe the only way out is suicide. Because of the rumors and vile spreading about Alice, she retreats into herself, going on the defensive and not speaking to anyone. Any girl who has had anything bad said about her — particularly by "friends" — can relate to how much it can hurt.

3. Sometimes girls themselves are the biggest slutshamers

Girls are sluts, boys are players, but it's not just the boys that think that. In Alice's case, its the girls who truly do the damage. And this issue is so complex, in terms of why this happens. Mathieu touches on it, getting into the brains of Elaine and Kelsie and seeing their reasoning for shaming Alice and creating this firestorm of hate around her.

4. You are who you hang out with

One of the reasons Kelsie can't back down from bullying Alice alongside Elaine and her friends is to protect herself against bullying directed toward her. One of the main survival tactics of high school is to fit in, and Kelsie can see that. Though she loved Alice (and Mathieu introduces complexity there, too), as she says when the trouble starts for Alice, she wonders if being known as Alice's best friend would spell trouble for her. And so Kelsie distances herself.

5. You will be blamed for what boys do

This issue is so prevalent in our culture today, and Mathieu addresses it with ease, almost as if her account is being ripped from our own headlines.

Brandon was a star football player in high school, and when he died in a car accident, Alice was blamed for distracting him with text messages. Not only the high school, but the community turns on her, saying it's hurt fault for ruining his future in sports, and the high schools' best chance at a State Championship. Unfortunately, this distorted outlook is all too familiar to girls in Steubenville and Michigan.

6. The school and community system often won't be there for you

When's the last time a boy was sent home from school because his clothing was too distracting to pubescent girls? Now, how about a girl? For Alice, though it's clear that she is being viciously bullied, and there's even a famous "Slut Stall" in the bathroom with disgusting things about her written all over the walls, the school system does nothing, not even clean it up. As Alice retreats further into herself, she becomes quiet, dresses in baggy clothing, and starts missing assignments in school. Instead of helping, teachers chastise her.

This is a familiar note in almost every case of high school bullying. When high schooler Cora Delille committed suicide, she left behind a note saying it was because of the tormenting of students — and she gave names. Witnesses confirmed the bullying with firsthand accounts, but neither police nor the school system took action. According to an article in the New York Daily News:

Even the allegations of bullying that authorities believe they've confirmed weren't more than name calling, which isn't a misdemeanor.

Then there are the well-known examples of Rehtaeh Parsons, Amanda Todd, and Daisy Coleman, who all show the tragic effects of the horrific responses from adults to bullying.

7. The impact of the high school bubble

There are projects like It Gets Better for the purpose of bursting this high school bubble, where anything and everything that happens in high school feels like it will be this way for the rest of your life. Everyone is in your business, even the parents and the teachers, and you're stuck as who you are. But, as becomes important in The Truth About Alice, seeing through this to the future can be the best way to get past it.