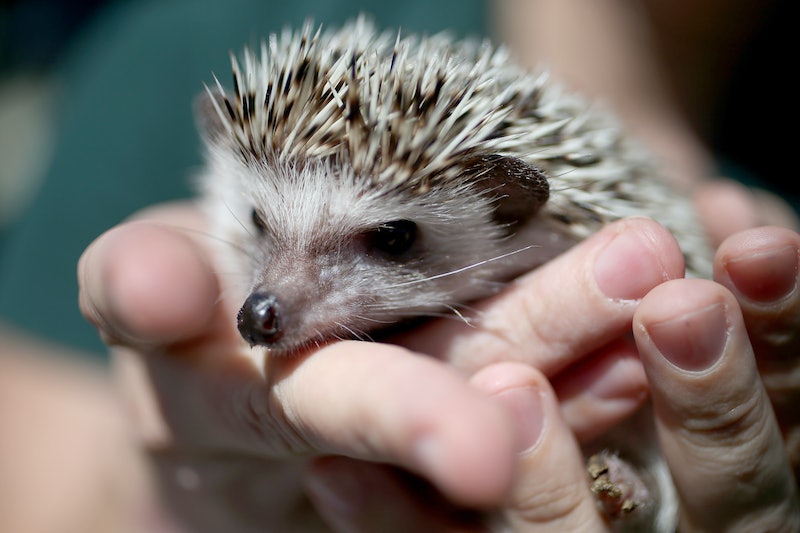 Growing up, the only hedgehog in your home was probably a bright blue video game character named Sonic. But that may not be the case for long: Although they're not as domesticated as dogs or cats, animal lovers are increasingly owning hedgehogs as pets in the United States, opening up debate over the benefits and safety risks of the small, prickly creatures.

Why people looking for four-legged companionship would choose to adopt a hedgehog over a cat or dog is simple, according to hedgehog breeder Jennifer Crespo. "A hedgehog can hang out all day while you are at work, you can come home, hang out with it for a couple of hours or, you know, put it away," she told the Associated Press.

Besides, being more low maintenance than a dog or a cat, hedgehogs have less of an odor than most rodents and are hypoallergenic, Crespo said.

They don't bark like dogs, and can be kept in small cages like hamsters or guinea pigs It also doesn't hurt that they're incredibly adorable, despite being covered in quills. Their cuteness combined with the stress-free ownership is no doubt increasing their popularity among pet owners, which has peaked at an all-time high in recent years.

Hedgehog domestication first became popular in the United States in the 1980s. In 1995, the International Hedgehog Association held its inaugural show in Tacoma, Washington; since then, about 100 hedgehog shows have been held across the country. According to Hedgehog Central, there are more than 175 authorized hedgehog breeders in the United States.

But while the roly-poly creatures may make for some cute Instagram pictures, they may not be entirely safe as pets. Currently, three states ban hedgehog ownership: California, Georgia and Hawaii. Owning a hedgehog is also illegal in all five New York City boroughs. Arizona, Maine, New Jersey and Wyoming require permits for hedgehog ownership, which can be very difficult to obtain.

Although ordinary hedgehogs are non-violent creatures and do not have the power moves of Sonic, they do pose certain health risks. A 2013 report from the Centers for Disease Control and Prevention found that hedgehogs can infect humans with a dangerous form of salmonella bacteria. While the bacteria is rare, CDC officials said the number of cases were increasing. Physicians have also warned about exposing children to exotic and unusual pets such as hedgehogs, because they are less immune to the harmful germs.

Let's not also forget what happens when you release your exotic hedgehog. Unable to survive in the North American wild, they'll perish without the kindness of hedgehog-loving strangers like Z.G. Standing Bear, who runs a hedgehog rescue in Colorado. Standing Bear has watched over 260 rescue hedgehogs, most of which were abandoned or abused, since he opened the reserve in 1999.

Although he's not pro-abandonment, Standing Bear is very much pro-hedgehog. "They're inscrutable characters," he told the Gazette.

More like this
Read Dan Levy's Heartbreaking Message After The Club Q Shooting
By Stephanie Topacio Long
If You Have Pets, You Probably Don't Realize You're Making These Common Mistakes
By Mackenzie Edwards
David Tennant’s Transformation In ITV’s 'Litvinenko' Is Astonishing
By Sophie McEvoy
Kate Middleton & Prince William Were Booed & Mocked On Their U.S. Visit
By Jake Viswanath
Get Even More From Bustle — Sign Up For The Newsletter