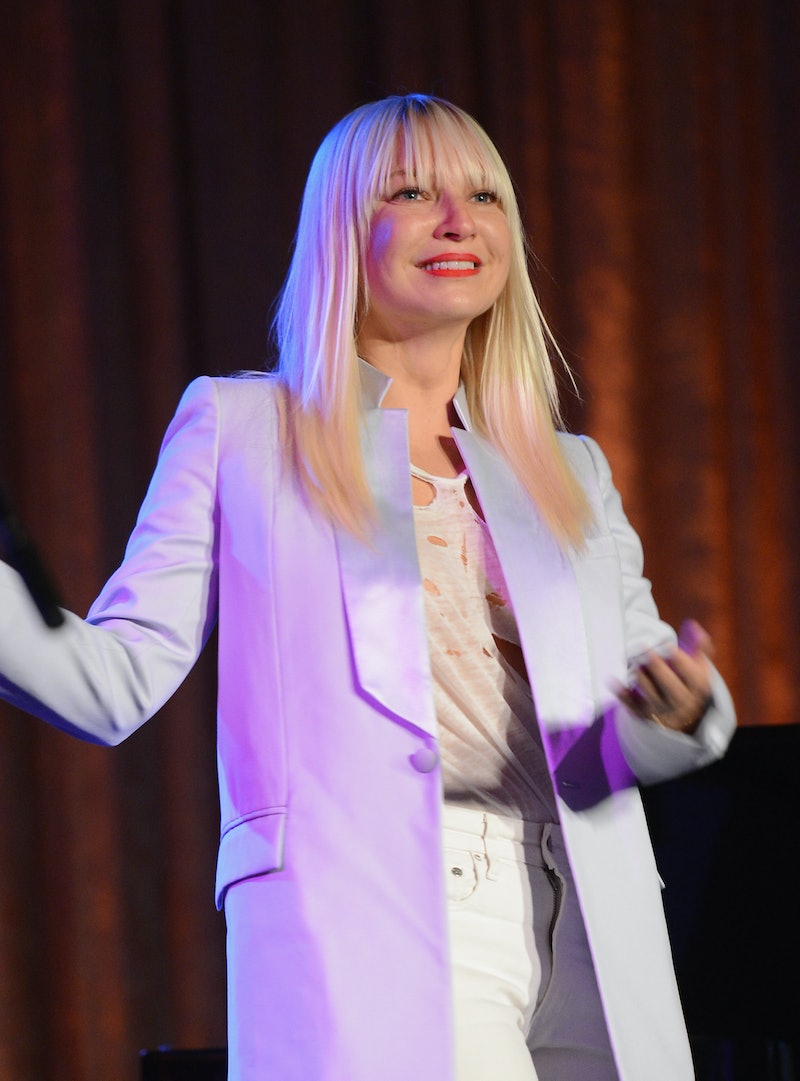 On Monday, Australian singer-songwriter Sia Furler released “Eye of the Needle,” an emotional new song lifted from her upcoming sixth studio album, 1000 Forms of Fear. Characterized by thundering drums and a haunting piano, on “Eye of the Needle,” I think Sia is singing about being afraid to let go of a former lover — but it’s kind of hard to say for sure. Admittedly, I can only understand about 13 percent of the song's lyrics, but somehow, “Eye of the Needle” still manages to be incredibly powerful and incredibly moving, anyway. Damn. How does she do it?

In my opinion, Sia is pop music’s foremost mush-mouth. She can be so difficult to understand at times, and yet, even if you can’t quite “get” the lyrics, the essential emotional bits of her songs always seem to come through loud and clear. On “Eye of the Needle,” Sia’s vocals are absolutely drenched in turmoil. You can feel her pain without having to understand a word.

On the song’s first verse and pre-chorus, Sia sings (...I think):

And if I move on

And I ain’t ready

So, you can see where I got that whole “afraid to let go of a former lover” thing from. After the first verse gives way to the song’s soaring chorus, it really doesn’t matter what Sia is singing about at all (which is good, because the only line I can understand is, “through the eye of the needle”) — her anguish is palpable. At times, Sia’s voice even cracks and breaks under the pressure, seemingly barely able to withstand the torment she’s going through. Yeah, it’s intense.

I feel the same way about “Eye of the Needle” as I do about Sia’s 2011 David Guetta collaboration, “Titanium.” I still have no idea what Sia is talking about during “Titanium’s” verses, but that’s OK. All you really need to understand is her, “I am titanium!” battle cry, and you grasp the song’s meaning instantly. It’s a very unique skill. I don’t think that you can necessarily teach that kind of unrestrained, emotive vocal delivery.

Strangely enough, even though she's hard to understand at times, I do still greatly admire Sia’s songwriting. When I have to work a little harder to figure out a song’s story (as I did with Sia's recent lead single “Chandelier”), I actually think I end up appreciating the lyrics more. And then, of course, when Sia writes for other artists, it’s easier to understand the words because, honestly, nobody’s articulation is as loose as hers.

Even if you can't quite sing along, listening to “Eye of the Needle” is actually kind of a cathartic experience. I can’t think of another artist today who possesses that kind of raw emotional power. It’s truly remarkable. There's no doubt about it: Sia is a treasure.

Check out “Eye of the Needle” via YouTube below. 1000 Forms of Fear will be released on July 8.