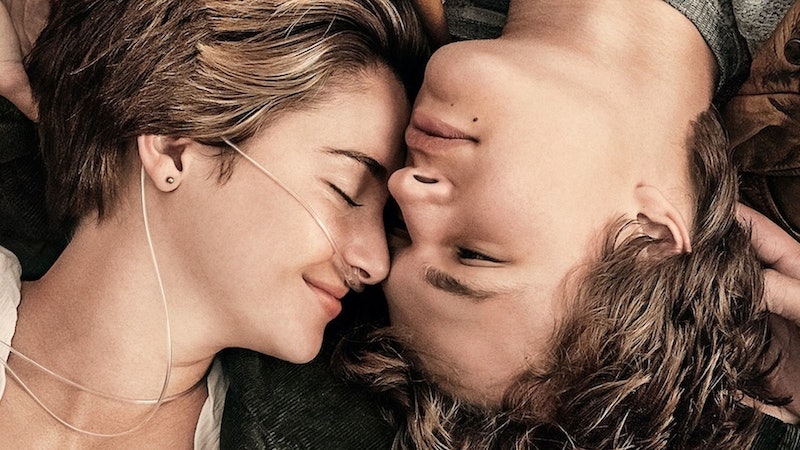 First times can be messy. They're awkward, uncomfortable, and often rushed. Thanks to decades of Disney films, John Hughes tropes and romantic comedies — sex — for the first time, is rarely what we envision it to be. Expectations rarely match reality, but American blockbusters sell teenagers an ideal of physical interaction that is rose petals and billowing sheets. And while most teens first times is anything but idyllic, imagine what it would be like wearing a cannula or stripping down to reveal your amputated leg to the girl you like for the first time. John Green explores these possibilities with his touching love scene in The Fault in Our Stars , and with the movie adaptation just around the corner, we were anxious to see how the on-screen version would match up.

Luckily, fans of the book won't be disappointed, as the film delivers a faithful adaptation of the scene, and even offers a little something extra. For the uninitiated, The Fault in Our Stars follows teenaged Augustus Waters (Ansel Elgort) and Hazel Grace Lancaster (Shailene Woodley) as they fall in love in the most deathly of circumstances. Both teens have cancer — Hazel has thyroid cancer that spread to her lungs, giving her the burden of wearing a cannula almost always. Augustus had osteosarcoma, which stopped spreading with the amputation of his leg. And while they must deal with the daily hardships of being cancer patients, they also attempt to live lives that are as close to healthy teens as possible. And this includes dating.

When Hazel and Gus make love, there are no string quartets strumming, no whisperings of soft nothings or sexy lingerie to be revealed. Instead, the teens, as Shailene's Hazel described it perfectly, are a "hot mess." Hazel struggles to strip down over the tangling chords of her cannula, and Gus is nervous to reveal his half-leg to Hazel. The scene, and the lead-up to the scene, begs the questions: How does one have sex with a cannula? Does it get in the way? Can Hazel take it out? If she takes it out, can she breath OK? Will the exhaustion of having sex without her breathing mechanism put her in danger of death-by-sex (yes, I'm talking to you Winter's Tale). And for Gus: Does leg amputation endanger any sexual functions? What positions does his lack of half a leg limit him to? Sure, it might be silly, but we're all thinking it, and surely these characters are.

The whole affair was the precise opposite of what I figured it would be: slow and patient and quiet and neither particularly painful nor particularly ecstatic. There were a lot of condomy problems that I did not get a particularly good look at. No headboards were broken. No screaming. Honestly, it was probably the longest time we’d ever spent together without talking.

"No headboards were broken"? Was that a jab at The Twilight Saga, John Green? Regardless, while this short but necessary scene in the book goes pretty much without any salacious descriptors, we do see some Hazel-on-Gus action in the film. I can't tell you what exactly, but hands wander and those who were looking to see the duo do more than hold hands won't be disappointed.

The Fault in Our Stars hits theatres Friday, June 6.