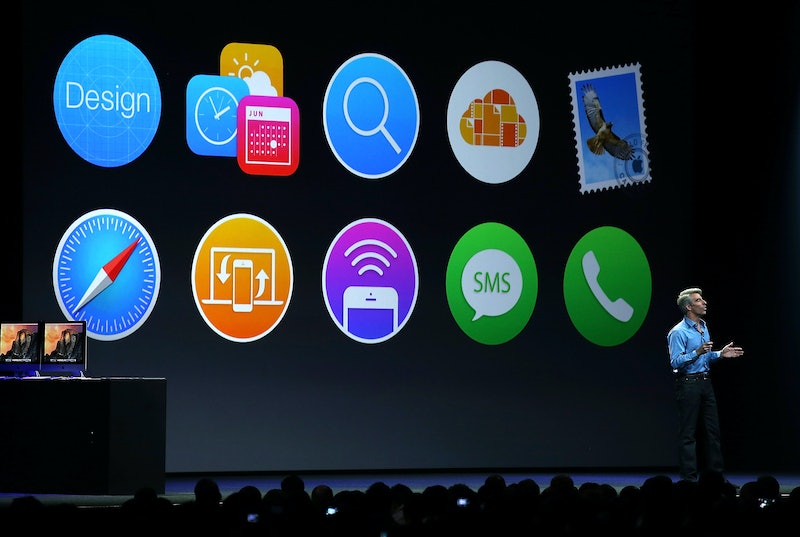 Unveiled at the Worldwide Developers Conference Monday, Apple's new iOS 8 software is designed to make your life that much easier. You can expect it to be rolled out this fall for the iPhone, iPod and iPad. In a statement, Craig Federighi, Apple Software Engineering Senior Vice President, declared:

iOS 8 offers simpler, faster and more intuitive ways to use your device with incredible new features like iCloud Photo Library, a new Messages app, the QuickType keyboard and an entirely new Health app. We’re also giving developers amazing new tools to make managing your health and your home from your devices an integrated, simple and secure experience.

Here's a quick look at the major changes you're (probably) going to appreciate...

Just kidding. But, fortunately, the irritating aspects of group messaging will cease to exist. With iOS 8, you can add and remove contacts from any group texting strings at any time, and even name them. Plus, you won't have to worry about the incessant messages grabbing your attention when you need to concentrate on something else. Yes, there is now a "do not disturb" function. Huzzah!

There's also a function where you can let your group messaging buds know exactly where you're located, for as long as you'd like — and if you're not big on texting, no biggie. You can opt to send photo, audio, or even video messages instead, which will delete themselves after a certain period of time unless you want to keep them.

All Apple users, at one time or another, fell victim to the autocorrect feature. There are even websites dedicated to making fun of major autocorrect blunders. So in the age of texting — Apple's Tim Cook says iMessage is the most used app — there's this handy, dandy new feature called QuickType. You actually educate the feature based on how you write, recommending words as you type based on who you are texting.

Isn't it annoying when you get a text and you have to come to a stretching halt on Facebook or Twitter or Snapchat, just to check and respond to it? No more! Now you can see and answer text messages without leaving your current app.

Other fun notification features include the ability to see who you message or call most often by double tapping the screen, and being able to literally flick any notification far and away if you just don't have the time or the energy to handle it right away. Yes, I think Apple is trying to save the collective insanity of Apple users everywhere.

Oh, so exciting. No really, it is! No longer will Apple users have to completely close an email in the Apple Mail application just to see the inbox. Instead, you can move it down to the bottom of the screen with a single swipe. Plus, you can now easily mark your emails accordingly, or delete them. An easy way to delete all that spam!

Ah, gotta love her, even more so now. She's getting a couple notable tweaks, including the ability to recognize a song with the Shazam application. Also, good news for all of us who drive or walk near moving vehicles! (Let's face it, that's probably all of us). When you plug your iPhone into your car, you can actually get Siri's attention just with the sound of your voice. That'll keep hands where they belong. On the steering wheel.

The new iOS 8 is available for developers now, but the rest of us will have to wait until fall. If you have an older Apple gadget, it may be time to upgrade if you're dying for the new software, as it will only work on iPhone 4S generation and up, iPad 2 and up, and fifth generation iPod touch.