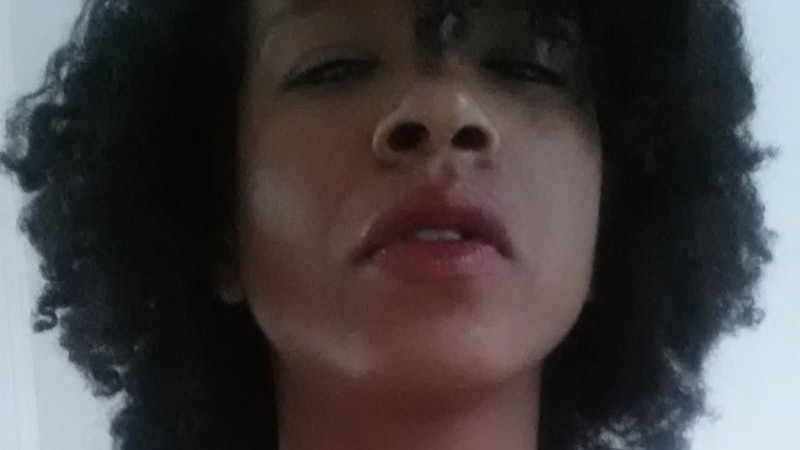 Going natural was a lengthy and scary notion for me. Once I gained the confidence and the knowledge of the many health benefits to my psyche, skin, and hair — I still put it off. This is a short journey of how I ditched my chemical relaxer, plus a few tips I discovered so you can go the natural route too.

The first of many relaxers

Growing up in New Hampshire, I longed to have straight hair like my friends, and after a decade of hot combs, my mother told me it was time for my first relaxer. I didn't know what that entailed, but I knew the outcome would be straight hair with an actual chance for getting bangs. Admittedly, I was a crybaby up until about my 18th birthday. Please believe, the only time I cried harder than getting my first relaxer was when my imaginary friend died after eating a poisonous crab.

Renee, my loving Dominican hair dresser, was very gentle, but even his fatherly hands couldn't mask the chemicals burning my scalp. After about 45 minutes — which felt like four days to young Kristin — he told me it was time to rinse it out. He then applied a neutralizing shampoo that made me scream in pain. After about a half hour of rinsing the relaxer out and conditioning my hair, it was time to get my hair rolled to go under the dryer. Fortunately, the dryer was loud enough to mask my small sobs. I remember thinking that I was being tortured; who in their right mind would go under high heat after just being burned?? A pretty high percentage of women it turns out.

I showed up to my first day of 6th grade, flicking my thick straight hair over my shoulder. It's a fond memory, because it was the last time my hair was ever healthy. At tennis camp, a long pony tail flung around with me on the courts; suddenly I had caught the attention of a few shorties that I had been secretly crushing on. Three months later, my old hair had started coming in. My mother broke the news to me: "Looks like it's time for another relaxer!" she exclaimed cheerfully. I recoiled in fear, I told her I'd never go back and I would run away from the family. That attitude changed however once I received my class pictures that were taken the first day of school. I knew I was going back — forever.

I talked about cutting off my relaxed hair a.k.a, going natural for about five years before I actually did it. Shamefully, I was nervous about boys mostly. I read magazines about how men wanted to run their fingers through your hair and feared I'd end up dateless. The second factor, was being a product of my own environment. I had worked hard to go against stereotypes growing up and I considered having kinky hair as something that would define me in a job interview as "too ethnic." (Also why I left the "Jackson" part of my last name off applications — but that's another story.) The ultimate reason that I talked about going natural for as long as I did was just out of sheer utter laziness. What if I was so truly lazy, that it ended up all falling off?

To be fair, I was already that lazy. I waited too long in between relaxers and washes which meant that when I finally showed up at the salon, I was more prone to burning. I had gotten my crying under control, but let me promise you, it never got better. Eventually, I got a relaxing treatment from an unlicensed hair dresser and most of my hair broke off. The horror that I experienced washing my hair for the first time after the relaxer was real. Strands came from the center of my hair in huge clumps and my hairline just didn't make it. The most horrifying part of this experience was how vain I felt. I could not stop obsessing and complaining about my broken hair. I felt ugly and my hair certainly looked ugly. It had taken forever for me to see my hair almost to my shoulders since that first relaxer and suddenly, I had to start from scratch.

While I was living in Portland, Oregon (yes, my hair was so bad that I packed up and moved across the country), I saw a picture of my friend Shareefah who had cut off her natural hair and put a fun, fluffy weave in her hair before I had moved. Suddenly, there she was on Instagram; the weave days were over and her hair had grown tremendously. She wasn't the only one, there has been a sudden craze in ditching relaxers and wearing your hair natural. The thing I love about this craze? No posers and no scalp-burning side effects. The amount of blogs out there create a world of support that simply was unheard of when I was growing up and even in college. When I learned the amount of harmful chemicals I was putting into my hair and scalp, it was no wonder if eventually all fell off.

On July 1st, 2012: I cut off all of my hair. I didn't have a strong emotional reaction because I had already learned it had been dead for years anyway. The reason that I went for the big chop as opposed to the alternative options to go natural is because I wanted to feel humbled again and just take a break from the amount of time I spent on my hair. After almost two years, I can say that it's one of the best decisions I've made — and not just in the beauty department. I'm in my natural state and if anything, the nasty hang-ups I once had about going natural have been proven wrong. I mean, who doesn't love an afro??

If you've got a kink in your hair that your sick of straightening, know that I can attest to it being cheaper than having a relaxer. Know that depending on how you keep your afro, it is incredibly time-consuming. In my opinion? The pay-off is big big healthy curls!

Here are three ways to make going natural seem less scary, if you're so over your relaxer.

As I mentioned, this was my choice and will by far be the cheapest way to go. When all the relaxed hair is cut off, your hair will be at its healthiest. This is a great way to focus on putting moisture back into your scalp and you can get to know your natural curl pattern, it's likes and dislikes. It's also a well-deserved break from years of taking an hour to get ready. If you've been longing for the day where you can get ready in 15 minutes and go swimming without a hair care in the world? This is your jam.

Not everyone looks good bald or with short-short hair. Trust me, as much as I appreciated the compliments, I did not feel cute with my short-do. Empowered? Yes. Cute? No. This option is great if going short is a deal-breaker for you. With this process, you'll grow out your natural hair to a comfortable length and trim the relaxed hair accordingly. The risky part is that you'll be treating two very different hair types which can be time-consuming and ultimately damaging to your new hair.

This is the most common option I see amongst my friends and peers and it's a combination of the "Relaxer Grow Out" and "The Big Chop." Grow out your natural hair to a reasonable length and then cut out the natural hair. Throw in some braids or a fun weave and then just chill for a couple of months (depending on the weave/style). You'll be worry-free in terms of styling and maybe you go after that flaming red hair you always wanted. The downside to this option for those of us who can't DIY, is the cost of hair and weave maintenance. In most cases, your hair will grow fastest and at its healthiest by itself without the weight of additional hair.

Ready to ditch that relaxer and join the natural craze? Check out Black Girl LongHair's site for extra tips!