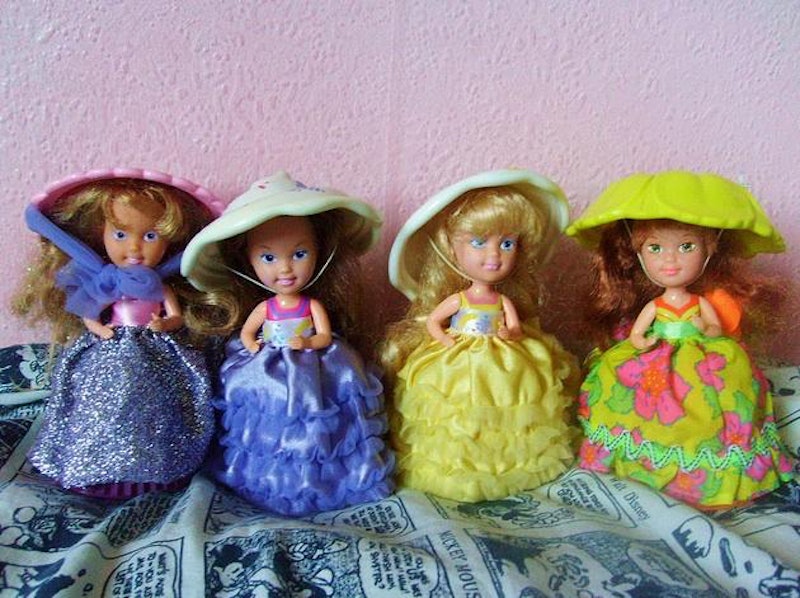 When I was a kid, I was a sucker for toys that turned into other things. I’m not just talking about Transformers (although the pre-Michael Bay Optimus Prime will always hold a special place in my heart); I’m talking about everything from Popples to those weird McDonald’s Happy Meal toys that transformed from a carton of fries into an action figure with a few twists of their plastic-y limbs. Naturally, then, it probably doesn’t come as a surprise that among the playthings I considered the most essential to my toy box were today’s today's TBT topic: Cupcake Dolls.

If you were born any time before 1989, you probably remember these babies. They may have looked like sweet and delicious cupcakes on the outside, but lurking on the inside was a tiny little woman with a gigantic hat and huge, poofy skirt. When you opened them up, the “wrapper” became the skirt, and the “frosting” became the hat. While they definitely didn’t look enough like cupcakes to fool anyone into trying to eat them, there was no denying the cool factor involved. But Cupcakes didn’t just look cool. They smelled cool, too. Like Cherry Merry Muffin and Strawberry Shortcake, Cupcakes had a place of pride in the “scented doll” genre of toys that was so popular in the ‘80s and ‘90s. Scented toys: Gateway drug? Probably not, but man, did those things smell good.

I had two or three of these suckers. One of them, Beri Blue with her frilly blue skirt and blueberry-adorned hat, came from the “Cutie Fruti” line; another, the hot pink and sparkly Sugar, came from the “Sugar and Shine” collection. I’m pretty sure I had one other “Cutie Fruti” doll — Cherry Chip, who pretty much looked like a non-sequined version of Sugar — but my memory is a little hazy, so maybe I’m making that one up. There were also five other lines to choose from, each with a different aesthetic; the “Candy Sprinkle” dolls had tulle skirts and sprinkled hats, the “Cotton Candy” ones faux fur trim, and the “Tropical Treats” dolls a bright, island-y theme, while the “Princess Parfait” dolls transformed into full parfait cups and the “Jam Pop” dolls squished down into jam jars. I loved these things so. Flippin’. Much. They were like spies. Delicious, pastry-covered spies.

So, here’s a little background information about them: According to a magical site I just discovered called Ghost of the Doll, Cupcakes were first produced by Tonka in 1990, then later by Kenner from 1991 to 1992. The reason for the shift had to do — as is wont to happen — with a business deal: Hasbro bought Tonka in 1991. Tonka had previously acquired Kenner a few years earlier in 1987, so when Hasbro moved in, production for the dolls was shifted over to Kenner. I haven’t been able to find why they originally ceased production, but I did discover something new: There has been not one, but two different attempts to revive them. A company called Fun Source released set of four dolls based on the “Sugar and Shine” collection in 1998; meanwhile, Radica put out six dolls, three each inspired by the “Candy Sprinkles” and “Cutie Fruti” lines, 2005. I haven’t been able to find any pictures of the 1998 dolls, but here’s what the 2005 ones looked like:

That’s Cotton Candy on the left and Blueberry Belle on the right. Personally, I think the details are lacking in the Radica dolls; also, their slack faces and blank expressions kind of wig me out. Maybe that’s just me, though.

These days, you can often find vintage Cupcakes in varying states of decay for sale on eBay. Some of them have been… shall we say, well-loved, while others actually look like they’re in pretty decent condition. They seem to run anywhere from $4.99 to $150, depending on the condition of the doll, whether it’s still in its original packaging, and whether or not it includes a full play set. They may not be big bucks, but still — $134.99 for a plastic doll is nothing to sneeze at. Lesson learned: Don't throw your kids' toys away. You never know what they might be worth someday.

Images: SodaHead, Ghost of the Doll