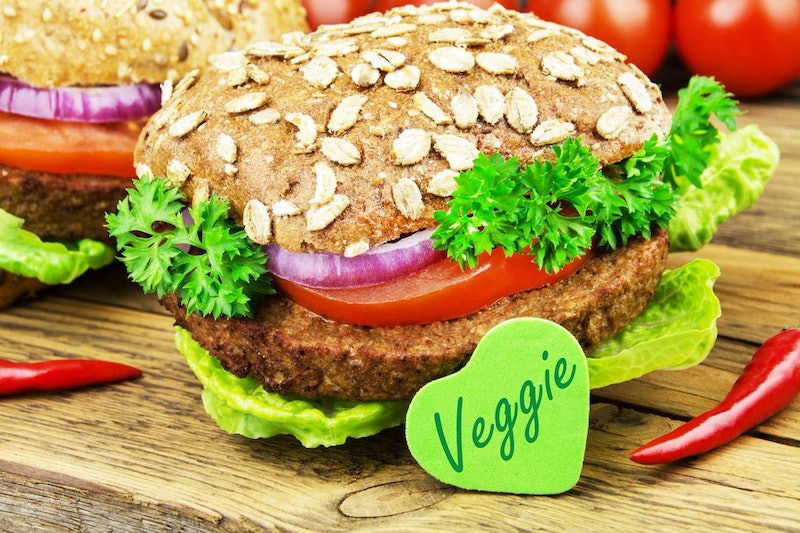 "gold standard" for measuring protein quality in other foodsProteins, to put it as my AP Biology teacher once said, "are the building blocks of life." Or, less simply, as the Harvard School of Public Health describes it:

"Protein is found throughout the body—in muscle, bone, skin, hair, and virtually every other body part or tissue. It makes up the enzymes that power many chemical reactions and the hemoglobin that carries oxygen in your blood. At least 10,000 different proteins make you what you are and keep you that way."

Not getting enough protein can lead to "growth failure, loss of muscle mass, decreased immunity, weakening of the heart and respiratory system, and death." Eek!

So how do you make sure you get 46 grams per day, the recommended daily intake for women over 19? If you're an omnivore, two servings (about a 3-ounce portion) of meat alone will take care of almost your entire need. If you're a vegetarian, the situation is more complicated.

People who don’t eat meat, fish, poultry, eggs, or dairy products actually need to eat a variety of protein-containing foods each day in order to get all the amino acids needed to make new protein in the body, as non-meat sources of protein usually lack one or more of the nine essential amino acids our bodies cannot make on their own.

Here are a list of some excellent non-meat sources of protein that should round out the diet of any vegetarian — or anyone just looking to cut back on her cheeseburger intake.

Check Out: The High-Protein Vegetarian Cookbook: Hearty Dishes That Even Carnivores Will Love, $14.25, Amazon

Did you know that eggs have such a high protein quality that scientists often use them as the "gold standard" for measuring protein quality in other foods? Yes, eggs are a great source of protein, as one egg provides more than six grams of protein, or 13 percent of your daily recommended amount. But keep in mind that nearly half the protein is found in the yolk, which some people shy away from because of its higher fat content.

The protein in eggs helps to build muscle and allow you to feel full longer and stay energized, which can also help you maintain a healthy weight. And eating eggs for breakfast will actually reduce your hunger throughout the day.

If you are looking for a particularly low-fat source of non-meat protein, you might want to try dried beans.They contain a much higher protein content by weight than other vegetable products, between 21 and 25 percent. In fact, in many parts of the world, they provide the majority of the total protein intake for the population.

Another great characteristic of dried beans is their relatively low production cost, compared to animal protein sources. So even if you also consume meat, you can supplement your protein intake with the cheaper option of beans from time to time.

It is true that pumpkin seeds are another good non-meat source of protein, with 1/2 cup containing an average of 8 grams of protein. However, they don't give you as much protein as beans, meat or some dairy products.

But when combined with complex carbohydrates, like cereals, breads, and salads, they contribute protein to otherwise protein-lacking dishes, making a balanced meal. So tossing them into your granola or trail mix or using them to replace nuts in baked goods will give you some extra protein. Every bit throughout the day helps.

If what you are looking for is a non-meat source of protein that will assist in muscle enhancement, look no further than cottage cheese, which contains two of the most important proteins in bodybuilding: whey-based protein and casein-based protein.

Whey protein, the liquid by-product of cheese production, and casein, which is located in the curds that separate from the whey during the process, are what make cottage cheese a power protein food, with a half cup serving offering you a whopping 16 grams of protein.

One of the first foods that usually comes to mind when we think of non-meat sources of protein is peanut butter, as it has long been praised for its protein content. The truth is that this beloved spread doesn't have as high protein content as other food items on this list, clocking in at only 7.7 grams in a 2-tablespoon of chunky peanut butter and 8 grams per serving in regular peanut butter. But, pairing your peanut butter with other protein sources, like whole-grain breads and milk (which are already excellent accompaniments to its salty sweetness), will give you a good shot at getting sufficient amounts of all the essential amino acids.

Quinoa is actually the first food on this list that is a "complete protein", meaning it contains all nine of the essential amino acids, which the body is not capable of making on its own and therefore must get from food. It packs the punch of 24 grams of protein per uncooked cup.

It's no wonder, then, that quinoa has been a trendy food not just in recent years, but for centuries. It was said to be "the gold of the Incas” because they believed it increased the stamina of their warriors.

Another benefit quinoa provides to herbivores is its high iron content, which can sometimes be lacking in a no-meat diet.

A handful of almonds or two tablespoons of almond butter will give you about 6 grams of protein, making it a great way to toss a protein-laced snack into the middle of your day. But almonds offer you more than just protein, as the monounsaturated fats found in these nuts have also been shown to reduce your risk of heart disease.

They are also one of the lowest-calorie nuts, meaning you can eat more of them for a more substantial-feeling snack.

Regular yogurt contains some protein, but Greek yogurt has over double the amount, with 15 grams per 6 oz container, the same amount as in a 2 to 3 oz serving of lean meat. And this treat has become increasingly popular and available in recent years; the fact that it's thicker, more filling, more tart, and less sweet taste than some regular varieties of yogurt has made it a favorite breakfast and snack choice.

And Greek yogurt will not only offer you the protein you need, but help fill your daily dairy requirement as well. Try it with fruit or as a substitute for sour cream in other dishes.

Seitan, sometimes known as "wheat-meat" in the vegetarian community, is a very popular non-meat source because of its substantial texture and high protein content, 17.5 grams in a 3 ounce portion.

If you're not a vegetarian or vegan, you may not be familiar with seitan, but this meat substitute made from wheat gluten is often used to mimmic the texture of chicken, making it a good alternative for anywhere you would traditionally use meat.

Seitan is not as easy to find in all grocery stores as some of these other foods, but you can find it at specialty markets or, if you're feeling adventurous, make some at home from a number of recipes you can find online.

When it comes to non-meat sources of protein, who could forget soy milk? An oldie but a goodie, soy milk, like all soy — including tofu and soybeans — is another great source of protein, with 8 grams per cup. But, it has the added benefit of being both convenient and versatile, as it can be consumed on its own or be used to replace milk in any number of dishes.

And some brands now offer options that are fortified with additional calcium, another nutrient vegetarians and vegans have to make sure to get enough of if they don't consume traditional dairy.

Plus, it comes in some great flavors, like chocolate and vanilla. There's even strawberry soy milk, if you're into that kind of thing.