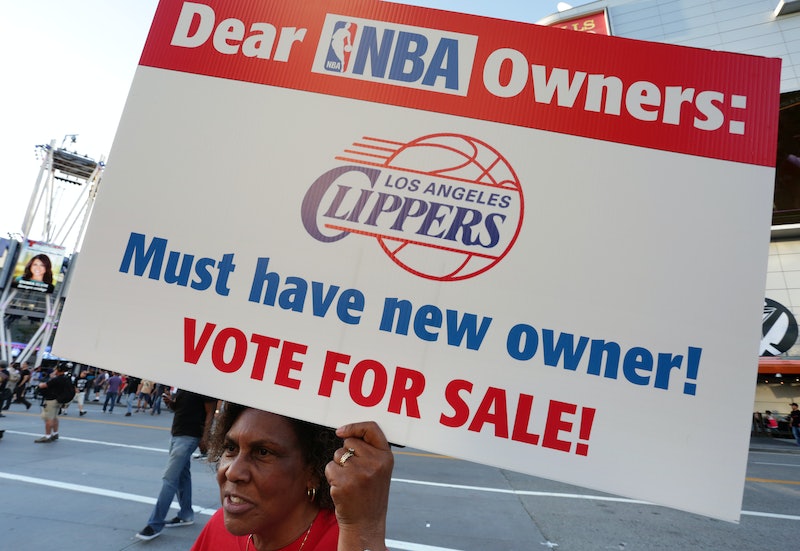 Ladies and gents, it's finally happening. Donald Sterling will sell the Clippers to Steve Ballmer, the former CEO of Microsoft, his lawyer Max Blecher said in a statement released on Wednesday night. This ends a drawn-out battle with Sterling, the racist whose wife (and the team's co-owner), Shelly Sterling, sold the NBA team for $2 billion a record-breaking $2 billion last week.

Donald Sterling officially announces today, the NBA and Donald Sterling and Shelly Sterling have agreed to sell the Los Angeles Clippers to Steve Ballmer for $2 billion and various additional benefits. All disputes and outstanding issues have been resolved.

ESPN reporter Ramona Shelburne said Sterling had agreed to sell the team and dump a lawsuit seeking more than $1 billion in damages he filed against the league. In exchange, the NBA will drop charges it filed in response to Sterling's suit and agree not to take legal action against him in the future.

But Blecher didn't say why Sterling ultimately agreed to the sale after promising to fight to the bitter end over the team's ownership. Let's all think waaaay back to last week, when Blecher was singing a very different tune and calling the sale "a pile of garbage."

I believe what they’ve done is illegal and it will not hold up in court. I believe what they’re doing is a blatant invasion of his constitutional rights because they’re using a tape recording that he did not consent to, and under California law, that recording cannot be used for any purpose, for any proceeding.

This, according to Blecher, was Sterling's feeling about the sale at the time:

There are rumors that Shelly Sterling's move to sell the team was based on a clause in (secret) trust fund documents that award either Sterling the ability to make financial decisions if the other is declared mentally unfit to do so. Sterling underwent a neurological work-up in the past month that may have turned up symptoms that leading to a diagnosis of Alzheimer's, USA Today reported last week.

Sterling's making a seriously good profit off the sale. He bought it in 1981 for $12.5 million, and the NYT's The Upshot reports that works out to a 15,900 percent return over 33 years. Sterling, we are all sincerely hoping you will consider that hush/retirement money.

Thus ends the tale of sad old philanderer Donald Sterling, not with a bang but with a whimper. Hooray.