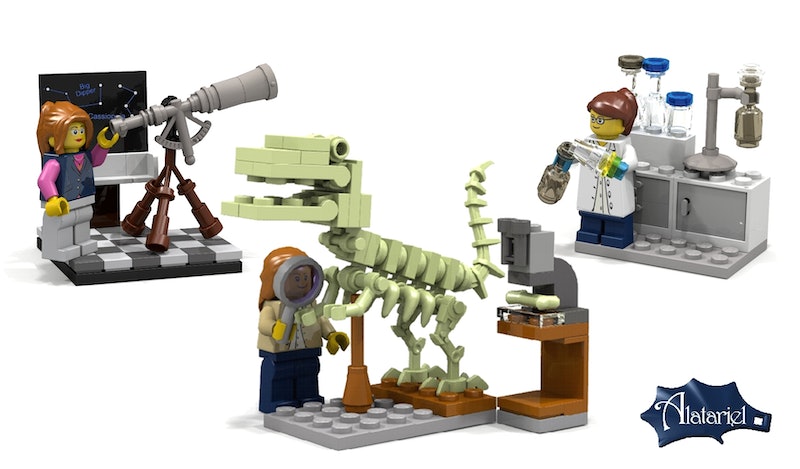 Awesome news, LEGO fans, scientists, and feminists: LEGO is adding female scientists to its just-announced new Minifig set. Starting in August, the “Research Institute” set featuring a female chemist, a female astronomer, and a female paleontologist will grace the shelves of toy stores everywhere, hopefully paving the way for more girls to get into science in the process. Finally, that one lone female scientist Minifig will have some company!

The idea was first proposed by geochemist Dr. Ellen Kooijman as part of the LEGO Ideas program. LEGO Ideas encourages fans of the building brick toys to submit their own ideas for play sets — and if you get enough support from the community for your idea, it gets a shot with the LEGO Ideas Review Board. If you win the review, then your idea goes into production as an official LEGO set. Neat-o, right?

Each of the scientists in the Research Institute set comes with her own equipment, including a chem lab, a telescope, and a dinosaur. Yes, a dinosaur. Said Dr. Kooijman on the project’s LEGO Idea page:

“Although recently LEGO has started to design and add more female figures to their sets, they are still a minority. A small set of minifigures would provide a great opportunity to add women to our LEGO town or city communities. I have designed some professional femal minifigures that also show that girls can become anything they want.”

Everyone is excited about this. Everyone. And with good reason, too. For many years, LEGO was one of those fabulously non-gender-specific toys marketed towards boys and girls alike (see: my favorite toy advertisement in the history of everything). But then in 2012, they released this horrible, awful thing known as the “Lego Friends” line. The Mary Sue has written extensively about Lego Friends, so head on over there for more information and some amazing commentary — but the short version is this: Instead of colorful bricks of different shapes and sizes bursting with possibility about the endless number of things they can create, Lego Friends can’t really be built into anything; they just are. The Minifigs that accompany them are curvy and feminine, and the whole line is basically one giant, gendered stereotype. LEGO has defended the line by saying that they did their research and they’re just giving girls what they want, and yes, the line is commercially successful — but the sort of compartmentalizing it promotes isn’t doing anyone any favors, least of all the girls it’s intended to be for.

Hopefully, though, the Research Institute set is the beginning of something bigger. Wrote Lucy Miller Robinson of SheKnows, “Could this be the beginning of increased awareness over the gender gap? Toys marketed to girls are all too often sexualized and marginalized, sending subliminal messages of what girls are supposed to be: pretty, sexy, and fun.” Geekosystem’s Victoria McNally, however, was right to note, “Oh, and if they could not do that thing where they indent the sides of their lady minifigs to create a smaller waist, too, that would be great.” Ayyyyy-men.