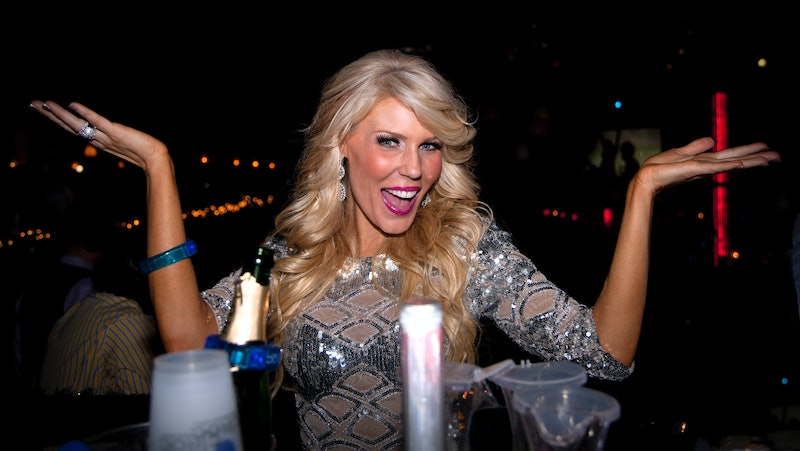 They say there are two certainties in life, death and taxes, but thanks to Bravo TV, I think we can go ahead and safely add Real Housewives' music videos to the short list. As long as these ego maniacs have a platform to share their lives on reality TV, they'll think themselves actually talented, and will pursue their passion for "music." The worst offender might be Gretchen Rossi from Orange County , whose new single "The Time Is Now" is a ballad of embarrassment. But she's not the only one. Almost every franchise of the Real Housewives has had at least one cast member put out a song, the only exception being the D.C. cast, who was too busy crashing the White House and getting cancelled to find their singing voices, and Miami, who was too busy not being popular enough to take advantage of their fan base.

The O.C.'s Gretchen definitely has the most drastic disproportion of actual talent to perceived talent, and if she weren't so cringe-worthy, it might be fun to watch. I don't think I have to remind fans about her disastrous Pussycat Dolls performance in Vegas last season — Housewives fans the nation over watched through a gap in their hands as Gretchen "sang" and "danced" and totally bombed on stage.

Her monumental failure did not, however, make her reevaluate her pursuit of a music career, and her new song is as terrible as you'd expect ... but it will make you chuckle when imagine her accompaniment is Ross Gellar on the Casio.

The thing with Gretchen is that there's nothing even mildly ironic about her music. She really, truly thinks she's good — the other Housewives at least seem to be semi-aware that they're being laughed at, and are willing to take that laughter all the way to the bank.

Real Housewife of New Jersey Melissa Gorga has put out a handful of danceable tracks, and might be the only cast member with actual talent ... relatively speaking, of course. RHONY star LuAnn de Lesseps had that ridiculous tune about how money can't buy you class; RHOA star Kim Zolciak started the "Don't Be Tardy for the Party" trend; and Simon from RHONY, as in Alex and Simon, put out a song, as well.

Everyone except Gretchen seems to know that they kinda suck, and we sort of all know they're doing it for the cash and the fame. (Well, OK, Kim Zolciak thinks she's really good, too, but there's just something you can't hate about a woman who shows up to a voice lesson carrying her own glass of Chardonnay and pauses to take cigarette breaks.)

Judge for yourself, though — is Gretchen the worst because she's the most earnest? Yes, totally. Let's give this girl a mic and a have her sing the national anthem before an NBA game, or something. That shit would go viral in a second.