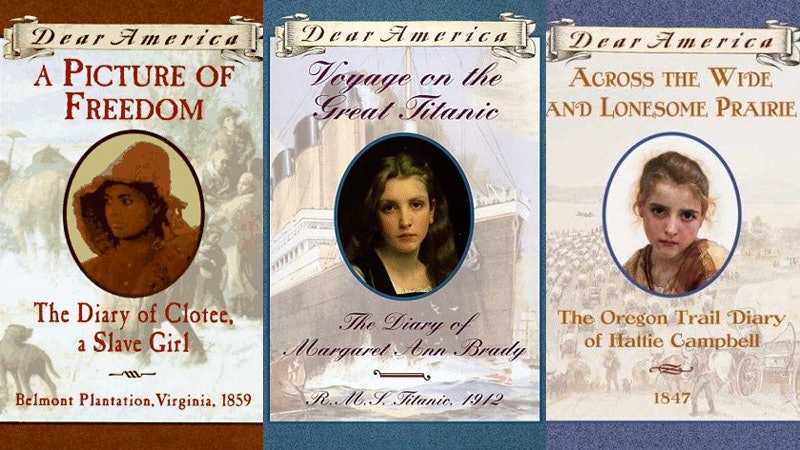 When people reminisce about the best book series of their youth, they tend to forget all those that didn't include wands, hobbits, or magical wardrobes. Sure, classics like Nancy Drew or The Boxcar Children occasionally get shout-outs, but for the most part, children's series that don't involve fantasy are typically overlooked. The reasons why are understandable, of course — books about babysitting or homework aren't nearly as exciting as those about broomsticks or pet owls — but it's still a shame. Some of the best kid's books of all time had their feet planted firmly in reality, such as the often ignored, but so, so good Dear America series.

For those who don't recall (but really, how did you not read these?!), the Dear America books were a series of novels published in the late '90s that told the stories, in diary form, of American girls living through famous historical events. There was Hattie on the Oregon Trail, Margaret Ann on The Titanic, Abigail in The Civil War — name an event in U.S. history, and Dear America likely had a book about it. Written in each character's unique, compelling voice, the series provided entertainment to countless tween- and teenage girls of the '90s and early '00s. And although readers might not have realized it at the time, the books also provided something much more important: lessons in feminism.

Dear America, with its all-female narrators and discussion of diversity, was actually pretty incredible. While many of the series' younger readers may not have known it, the books provided more information on what feminism is and how girls can incorporate it into their lives than practically any other children's series of the time. There's a reason Scholastic revived the series four years ago after canceling it in 2004; the world is a better place with Dear America in it, and feminists everywhere can thank the series for teaching them what the word truly means. Eight of the best feminist lessons from the Dear America books:

You're Stronger Than You Think

The Girl Who Chased Away Sorrow: The Diary of Sarah Nita, a Navajo Girl (1999)

Lesson: It's okay to be scared — Sarah Nita was, when she got separated from her parents on the Long Walk. She managed to survive the journey, though, by discovering strength in herself she didn't know she had, and persevering even in the darkest of circumstances.

Lesson: Clotee, a slave on a Virginia plantation, taught herself to read and write while overhearing the tutoring lessons of her owner's son. By doing so, she risked her life, but to her, education was worth the danger. For Clotee, knowing how to read and write allowed her to take more control over her own life, and be better able to fight for her freedom.

Fight for What You Believe In

Where Have All the Flowers Gone?: the Diary of Molly MacKenzie Flaherty (2002)

Lesson: Despite her parents' wishes, Molly, a girl growing up during the Vietnam War, attended anti-war demonstrations and combatted racial prejudice because it was what she believed was right. It was difficult for her to deal with her family's disapproval, but she never strayed from her values — in fact, the louder the protestations got, the harder she fought.

There's More to People Than Their Appearances

Across the Wide and Lonesome Prairie: The Oregon Trail Diary of Hattie Campbell (1997)

Lesson: While traveling the Oregon Trail, Hattie realized that no one — not old Mrs. Kender, obese Mrs. Bigg, or the Native Americans her people feared — should be judged solely by their appearances. It's a person's character that matters, and the way someone looks is never a reason to cast them aside.

Embrace 'Bossy' — and Be the Boss

Dreams in the Golden Country : The Diary of Zipporah Feldman, a Jewish Immigrant Girl (1998)

Lesson: Zippy's older sister, Tovah, disapproved of the horrible conditions in Manhattan sweatshops and desperately wanted a change. So instead of waiting around for someone else to take action, Tovah rose to head of a union and gave a voice to all the immigrant workers in the city's shops. Bossy? Yup. Effective? Without a doubt.

Don't Let the Haters Get You Down

A Time for Courage : The Suffragette Diary of Kathleen Bowen (2002)

Lesson: Your uncle doesn't want you fighting for women's rights and thinks the suffrage movement is a "fool women's thing?" Oh, well. Who cares? Not Alma, her mother, or her Auntie Claire, all whom never left the picket line, no matter how angry their actions made the sexist men in their life.

You Are Your Own Hero

Lesson: When Bess was blinded in an accident, she thought her life was over. She was sent away to school, couldn't walk around with help, and was treated as a victim by everyone she met. After some solid moping, however, Bess said to herself: suck it up (well, in more Dear America-friendly terms), and stopped the self-pity. She learned Braille, focused on healing, and, happily, proved everyone — and herself — wrong by achieving her goals, disability or not.

Never Give Up Your Freedom For a Man

Voyage on the Great Titanic : The Diary of Margaret Ann Brady (1998)

Lesson: Margaret almost died after giving up her precious spot on a lifeboat off the Titanic to go save a guy she'd known for less than 48 hours. Thankfully, she managed to get off the ship, but it was a very close call. Ladies, a lesson: don't do that.

More like this
Jessica Simpson On The Time She Was Pursued By A Backstreet Boy & An *NSYNC Member
By The Editors
24 History-Making Black Women You Probably Didn't Learn About In School
By Ayana Lage and JR Thorpe
25 Inspiring Quotes From Black Women To Celebrate Black History Month
By Kyli Rodriguez-Cayro and JR Thorpe
Netflix Shut Down 'Bridgerton' S3 Rumours About A “Very Dark” Storyline
By Bustle
Get Even More From Bustle — Sign Up For The Newsletter
From hair trends to relationship advice, our daily newsletter has everything you need to sound like a person who’s on TikTok, even if you aren’t.