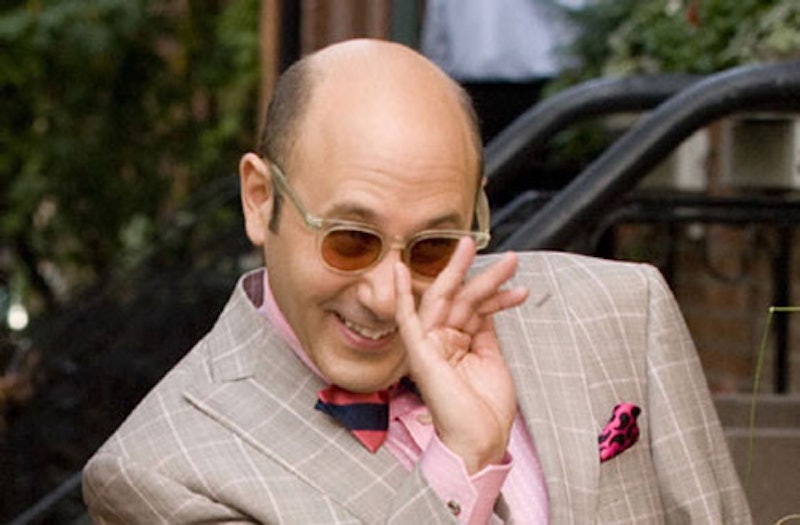 Here's the sad thing about Sex and the City , that 16-year-old TV show we all love to re-watch: it doesn't hold up. Sure, the general themes of the series are still valid — relationship problems, dating in NYC, the value of female friendships — but much of what occurred to Carrie and Co. back in the '90s and early '00s would never fly today. AOL emails? Smoking indoors? Commiserating over a guy's unlisted phone number? Wouldn't happen. As much as we love SATC, those of us who watch reruns regularly are forced to admit that we probably shouldn't be getting our dating advice from women who wear chokers and make fun of Pokemon.

One element of the series, however, holds up pretty well after all these years: Stanford Blatch, Carrie's snarky, stylish, and hilarious gay best friend. Like all the show's characters, Stanford had his share of now-irrelevant social advice or cringeworthy '90s and '00s fashion. His quotes, however were timeless. 16 years after Sex and the City premiered, Stanford's opinions on love, friendship, and New York City are still as spot-on as ever, and, if it was possible, even more enjoyable to hear today. In honor of the show's anniversary, six of our favorite Stanford quotes from the series' six seasons:

"Puberty is a phase, fifteen years of rejection is a lifestyle."

Stanford was always insecure about his appearance, but he finally finds his happily ever after with Anthony, in Sex and the City 2.

Stanford and Carrie's banter was always the best part of their scenes together. Example B...

Carrie: "Oh God I love Sleeping Beauty! The music, the sets, the costumes! It's so romantic!"Stanford: "You only like it because she gets to sleep for a hundred years and she doesn't age."

I mean, that does sound appealing. And example C...

Carrie: “You wouldn't commit to a nice guy, given the option?"Stanford: "I can't even commit to a long distance carrier."

The landline phone reference may be dated, but commitment issues are timeless.

"We all judge. That's our hobby. Some people do arts and crafts. We judge."

Stanford Blatch, saying all the things the rest of us are too ashamed to say but totally feel since 1998!

"A New Yorker who does not take the subway is not a New Yorker you can trust."

All this time later, still 100% true. Thanks, Stanford, for doling out pieces of wisdom to Sex and the City fans for 16 years and counting.