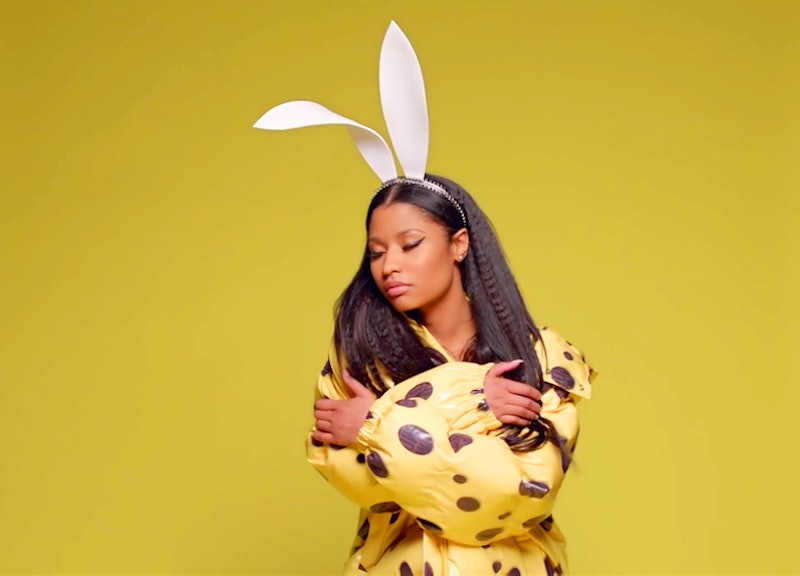 Rapper Nicki Minaj released a preview for her “Pills N Potions” music video on Friday, and it features some strange imagery that I just can’t quite wrap my head around. But don’t worry — I’ll get to the bottom of it. Mostly, the clip reveals that Minaj has a serious thing for bunnies. She’s wearin’ bunny ears and she’s cryin’ bunny tears. There’s even a bunny boppin’ along to the beat and a bunny Pez dispenser shootin’ out pills — and that’s just in this 46 second-long preview! Imagine all of the bunny shenanigans that await us in the full thing…

While I’m sure that there are many valid interpretations of "Pills N Potions'" lyrics, to me, the song seems to be about self-medicating in an attempt to “dull the pain” and forget about a loved one who did you wrong. What does that have to do with bunnies?

…Did a bunny hurt Nicki? It could happen. In the second grade, I was so excited to take my class pet bunny Patches home for the weekend, I was practically losing my mind. I had waited all year for my turn to arrive, and I had BIG plans. Patches and I were going to be fast friends. Would we go for a walk around the block? Perhaps a friendly neighbor would see us steppin’ out from across the street and yell, “Hey, kid! You and that bunny — lookin’ good!”

Would we have a carrot-themed tea party? Could I use my newly acquired origami skills to make him a custom fortune teller?? Probably! The possibilities seemed endless. Perhaps I would take such good care of Patches, I would be asked to take him home for…the entire summer!!! The thought was almost too much for my young mind to bear.

Sadly, it was not meant to be.

When I got Patches home, all he wanted to do was stink up the joint and poop on the floor. As I quickly learned, all bunnies really care about is pooping. If bunnies were to wake up each morning and make a to-do list for the day, it would contain over 1,000 items and most of them would involve pooping. Sure, there might be a break for sex worked in there somewhere, but really, they’re just all about pooping and crushing your dreams of lifelong friendship.

I couldn’t wait to drop that little stink bomb off at school on Monday. What a betrayal. What a disappointment. “I’ll never touch another bunny again as long as I live!” I vowed. It was the worst weekend of my entire life. I quickly decided that a bird would be a much more reasonable, considerate pet. But then my mom told me that our entire family would get salmonella and die if I got a pet bird, so those dreams were crushed, as well.

What I’m trying to say is: yes, a bunny may have hurt Minaj’s feelings in the past like a bunny once hurt mine. In which case, she just needs to wash that floppy-eared fool right out of her hair and move on! I did and I’m so much happier because of it.

But there are other explanations for why the video features so many bunnies, I suppose. There might be some Alice in Wonderland stuff going on. That bizarre shot of Minaj crying metallic tears does sort of resemble this famous scene from the Disney movie:

Additionally, going “down the rabbit hole,” anyone? That talking bunny who’s late for a very important date? Plus, you know basically every character in that story was doing some serious "self-medicating." They were smokin' drugs and smokin’ ‘em HARD. Yeah, Minaj could definitely be referencing Alice in Wonderland here.

The only other realistic option I can think of is that Bugs Bunny in drag is Minaj’s true style icon. Which, now that I’m typing it, actually sounds totally plausible. I’ll need to do some further investigation, but I present the following as photographic evidence:

More like this
The Jonas Brothers' New Album Has A Very Meta Name
By Alyssa Lapid
This Girls Aloud x Sugababes Collab Still Hits All The Right Notes
By Sophie McEvoy
The Spice Girls Are Set To Reunite At King Charles III’s Coronation
By Sam Ramsden
Cruz Beckham Teased New Music With An Adorable Nod To Mom Victoria Beckham
By Stephanie Topacio Long
Get Even More From Bustle — Sign Up For The Newsletter
From hair trends to relationship advice, our daily newsletter has everything you need to sound like a person who’s on TikTok, even if you aren’t.