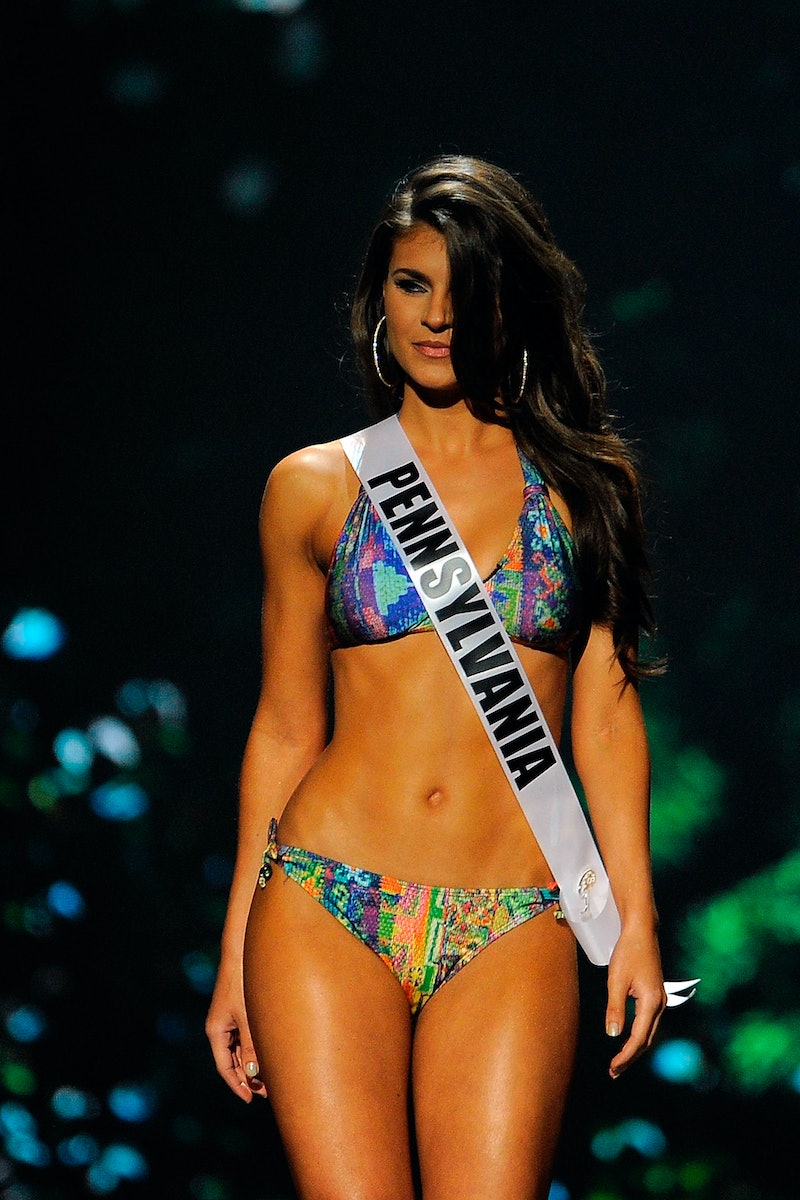 Every Miss USA hopeful likes to think they have a unique story, but this year's Miss Pennsylvania has a particularly powerful one. On Thursday, Pittsburgh native Valerie Gatto, 24, told NBC's Today that she was "a child of rape." Now, she's hoping that she can use Miss USA as a platform to share her experience and spread sexual assault awareness.

Gatto revealed that her mom was just 19 when she was leaving work on a busy Pittsburgh street, and was assaulted by a man dressed in black. He held her at knifepoint behind a building and raped her. When a passing car with its high beams on alarmed the perpetrator, she was able to get away.

As terrifying as the anecdote is, Gatto has used the tragic circumstance to empower herself. "Being a child of a rape, not knowing who my father is, not knowing if he’s ever been found, most people would think it’s such a negative situation," Gatto told Today. "I grew up with my mom and my grandparents. They never looked at it as something negative. I have a loving, supportive family who told me I could be the president of the United States."

With or without the Miss USA title, she is determined to teach young women between 18 and 30 how to protect themselves against sexual assault. "Unfortunately, we have to be aware of these crimes," Gatto told Today. "I hope to show others how to be proactive, what to do, to be present, to be aware of your surroundings, little things like that … I'm educating women about a topic that’s so serious, but it’s so awesome to see their responses. They say it changes their life."

So far, Gatto's participated the International Men’s March to stop rape, sexual assault and gender violence, but with the new title, she'll be able to do more.

It's refreshing to see women like Gatto bring such an important topic to the forefront at this year's pageant. Her push for spreading sexual violence awareness could inspire other women to join the discourse; it's her way of saying, "Hey, this subject shouldn't be taboo, so let's talk about it." Seeing a Miss USA contestant talking about rape on TV will probably make young people feel more comfortable broaching the subject.

And it's a subject that affects 238,000 Americans per year — that's one victim every two minutes — according to Rape, Abuse, and Incest National Network (RAINN). While Gatto's mother's story of the man dressed in black is what nightmares are made of, the scenario isn't common. About two-thirds of all rapes are committed by someone the victim knows, with 38 percent of rapists being a friend or acquaintance. More than half of all rape and sexual assault incidents occur within one mile of the victim's home, or at the victim's home.

And just as scary as those numbers are the statistics for unreported sexual assault and rape cases. 60 percent of sexual assault cases go unreported, making sexual assault one of the most under-reported crimes out there. Even when cases are reported, very few lead to an arrest. The resulting statistic is maddening: only three percent of rapists will ever serve jail time.

Even in the 2014, there is still a stigma attached to rape, a cultural belief that to be the victim of sexual assault is shameful — or worse, the victim's fault. All of this underscores the importance of spreading awareness, especially when it's coming from a role model that the young female population looks up to, like, say, Miss USA.

Even before she hits the stage this Sunday, she is already leaving her mark.

"I believe God put me here for a reason," she told Today. "To inspire people, to encourage them, to give them hope that everything is possible and you can't let your circumstances define your life."