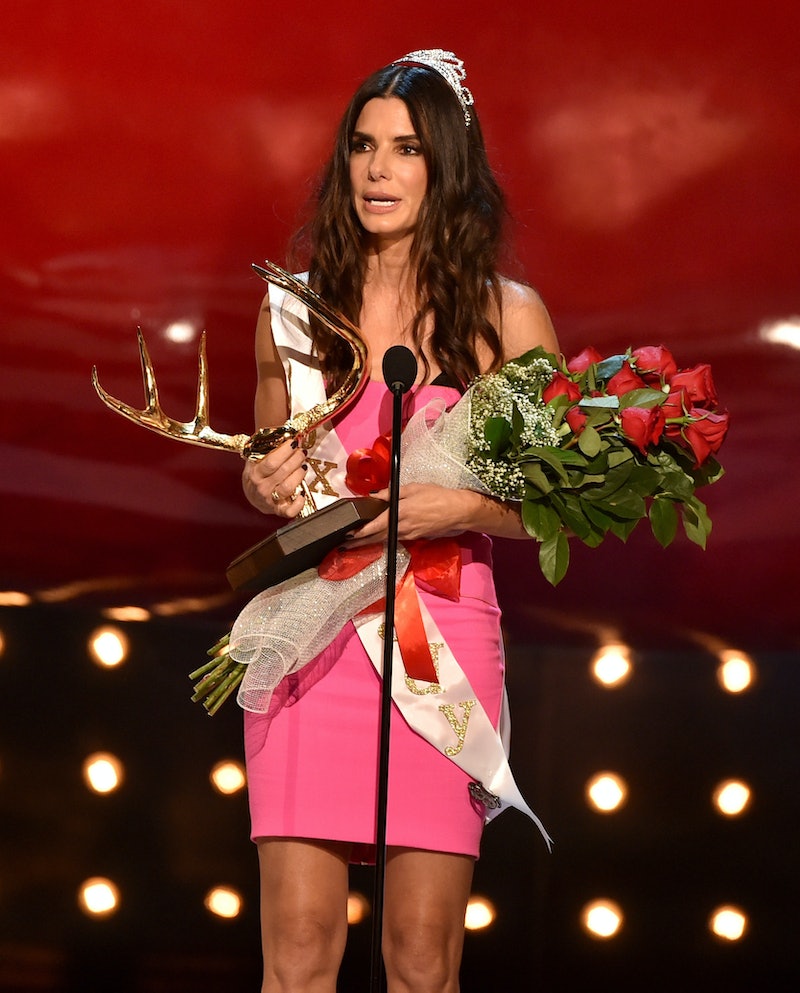 Beyoncé might get all the recognition and hype as Hollywood's most stylish individual, but, sorry, Sandra Bullock is right up there with Queen Bey. Ever since she burst onto the scene in the '90s, the actress has won our blackened hearts for her portrayal of the accessible Everywoman, even when she is floating in space, by herself, after losing touch (literally) with co-star and real-life buddy George Clooney. Offscreen, in recent years, Bullock has navigated a very public cheating scandal just days after picking up an Oscar that Speed and While You Were Sleeping fans never saw in her future, and saw herself as an Academy darling once again with her aforementioned role in Gravity. Point being, the 49-year-old actress has never been better... and she has never looked hotter. And that's precisely why she picked up the Decade of Hotness Award at this weekend's Spike TV Guys Choice Awards.

Who doesn't love Sandy? She isn't afraid to let it all hang out, to be unglamorous, to sacrifice being pretty and perfect for onscreen laughs, and to pick up her well-earned Razzie in person. And, throughout the past 10 years that Bullock was honored for, we've seen her style change, even if her looks haven't. (Jealous.) But which year of the past decade was the best for the actress? We've ranked her style sense throughout the years, and found that All About Steve isn't the only reason she should leave 2009 in the past.

Bullock became a red carpet fave in 2010 as she campaigned for her Oscar for The Blind Side. Her shimmery Marchesa column gown, worn to the Academy Awards, was the highlight of her red carpet run. She was stunning as she played dress-up at nearly every event, but it was how she handled herself upon finding out her husband banged other, much less classy women that made hotter than a thousand suns. #Truth.

Sideboob wasn't as popular in 2005 as it is today, but look at our gal! She was ahead of the style curve, showing off sexy sideboobage in an LBD. Check out those toned shoulders, too! We wish that the hem was a bit shorter and showed some knee, but the cleavage-flashing top totally blew us away and tipped us off to her sexiness.

Bullock looked better than ever the year she became a new mom, adopting son Louis. Despite all the personal upheaval and changes, including the good ones, she was still ravishing.

Baby got back! Here, Bullock, with her romantic updo and subtle show of skin, presented herself like the gorgeous, yet attainable goddess she is.

Bullock looked like Tina Fey's sister in this strapless white frock. And that's a great thing. And, speaking of, why aren't they doing a movie together? We'll take a finder's fee for that suggestion, Hollywood execs!

She was sleek and sexy in gunmetal lace! Lovin' that glossy blowout, too.

Bullock was an ethereal nymph in this tiered, one-shouldered, frothy gown. It was a bit uber femme, but she totally gave the bone-hued frock an edge with that turquoise purse. Color us proud.

Bullock is often classy, especially when she covers up, and while this was not our favorite look or year for her, we get that she was a new and a busy mommy.

Okay, so the smile was mega-wattage and the cheeks were super rosy, but the messy updo and colorblocked, drapey bodice dress were semi "meh." This look, however, was a pre-cursor to her style maturation and willingness to take a chance, which she would put on display during her incredible awards season run in 2010.

This frilly white frock, coupled with the honey highlights, was a bit fussier than we are used to from Miss Sandy Bullock. Her body is always bangin', yes, but we like her a little more streamlined and less feathery.