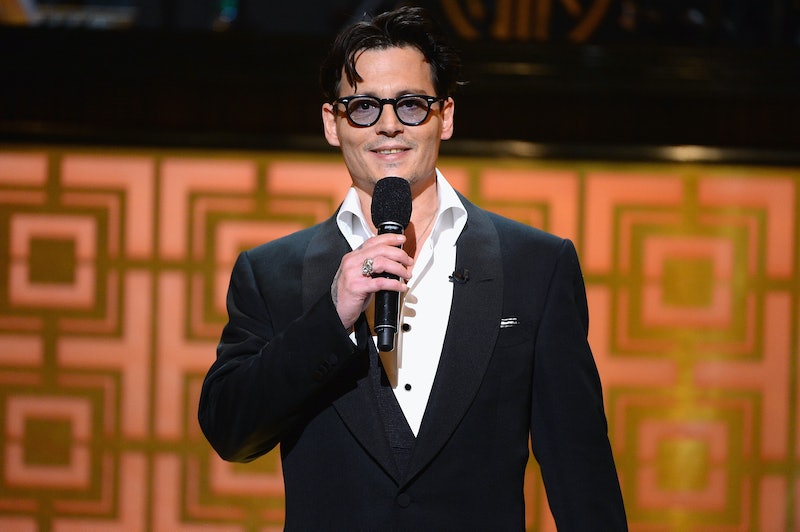 Whether you're a diehard fan of Captain Jack Sparrow's unorthodox antics in the swashbuckling Pirates of the Caribbean series or fell in love with outsider Edward Scissorhands in the offbeat Tim Burton film of the same name, chances are that Johnny Depp played some sort of role in your adolescence. It seems hard to believe, then, that Depp turns 51 years old today, in spite of an attitude and manner of dress which makes him seem like a wry 30-year-old oddball. It is a rare occurrence when an actor's style reflects his or her personality, but Depp's outré fashion has remained a perfect illustration of his bohemian lifestyle since he stumbled into Hollywood with his performance in 1984's Nightmare on Elm Street.

Though predicting exactly what Depp will wear on any given occasion is a futile exercise due to the actor's whimsical style, he has nevertheless given his fans several decades worth of matchless ensembles, and more than a few style directives that frankly work for both genders. Whether rocking mismatched dog tags or his beloved fedora, Depp's fashion is unparalleled in its ingenuity. So in honor of Mr. Depp's half-century of living like the most charming renegade in existence, here are 11 style lessons from the man himself.

1. HATS ARE COOL: EXHIBIT A

Johnny Depp may have an indecisive style, but he never forgoes an opportunity to wear one of his many hats. From fedoras to beanies, Depp's love affair with chapeaus is perhaps his longest standing relationship. Pharrell's hat is officially jealous.

If you think pairing a dapper cane, gilded pocket watch, an immaculate pocket square, and white gloves with a formal ensemble is simply too much, think again. Johnny Depp is a master of over-accessorizing, but somehow the effect is oddly alluring.

3. WHEN IN DOUBT, WEAR LEATHER

You likely don't need another reminder that leather is the perfect accent to any ensemble, but Johnny Depp serves as a paragon of the principle.

4. YOUR SUNGLASSES TELL THE WORLD WHO YOU ARE

Johnny Depp's shades tell the world that he is an enigmatic and alluring individual with no regard for trends or convention.

Not only is a bohemian look unisex, it's also a mode of attire which Depp has played with for the past 20 years. Lesson learned: bohemian style is always a undercurrent amongst the truly chic.

6. NEVER UNDERESTIMATE THE POWER OF A VEST

Mr. Depp loves a good three-piece suit, and even when the attire is jacket-optional, the star still relies on one of his many omnipresent vests.

7. A LITTLE BLING NEVER HURT ANYONE

At any given moment, Mr. Depp is likely to be wearing at least three rings, a bolo tie, and an armful of bracelets. Coco Chanel may have valued simplicity of jewelry, but Hollywood's favorite rocker-turned-actor demonstrates that sometimes, more bling is better.

8. GRUNGE IS BETTER WHEN YOU TRULY EMBRACE IT

Instead of a ripped jean here or a flannel shirt there, Depp proves that the way to rock the grunge trend is to simply go for it. And he should know: Depp was instrumental in creating the movement in the 90s.

Try to imagine the last informal occasion which Johnny Depp attended without his signature scarf, I dare you. Though street style stars and celebrities from Jessica Alba to Kate Bosworth are proponents of the casual scarf, it's Depp who truly exemplifies the look.

If there is any sartorial lesson to be learned from Depp's appearance in Pirates of the Caribbean, it is that an unorthodox combination of a rumpled blouson, be-feathered hair, and smudged eyeliner somehow looks incredibly alluring. Perhaps the look should be reserved for after-hours activities, but nevertheless, it just works.

11. DRESSING LIKE YOUR SIGNIFICANT OTHER WORKS…IF BOTH PARTIES ARE THIS ATTRACTIVE

Johnny Depp and fiancée Amber Heard may be one of the most attractive celebrity couples to grace the red carpet of late, and the dynamic duo appears to be sharing sartorial inspiration to capitalize on their collective beauty. However, matching your significant other in terms of fashion walks a very fine line between sweet and cloying. Always the rebel, Johnny Depp manages to wear near-matching ensembles to Amber Heard's and not look like a lunatic. Yet again, the king of offbeat style deserves a round of applause.