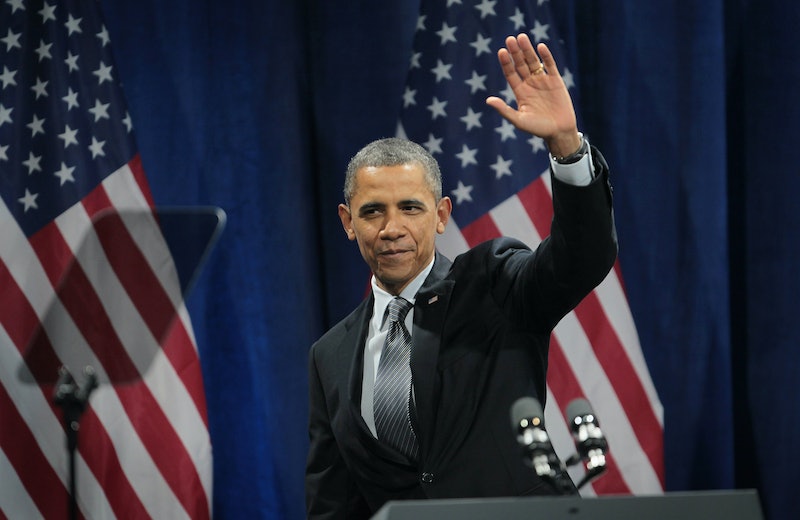 On Monday, President Obama signed a memorandum that seeks to make student loans more manageable. That's good news, but then again, could they have gotten any less manageable? The non-profit group American Student Assistance estimates that 60 percent of students who go to college in the U.S. take out loans, and that there are about 37 million people with outstanding student loans today. According to Time Magazine, the average student who graduates with debt owes $29,400, and in some states this average is as high as $33,649.

Obama's plan would expand on his "Pay as You Earn" program launched in 2011, which promised that, by 2014, loan payments would be reduced to 10 percent of borrowers' incomes and allowed 1.6 percent of borrowers to "cap their loan payments at 10 percent" immediately. The new referendum will expand these benefits to borrowers who took out loans before 2007, among other measures. The President plans to increase the number of Pell Grants, which provide need-based grants to low-income students.

President Obama will be holding a Q&A session about his new plan on Tumblr, in which we hope he will further explain the referendum. We also hope he will post original poetry and pictures of cats. In gearing up for this big Tumblr chit-chat, we've realized there are a few things we'd like to ask the President. Here are five questions we have about Obama's plan:

Obama's new plan will allow teachers to cancel their balance after 10 years, and low-income borrowers to cancel their balance after 20 to 25 years if they consistently pay on time. In doing so, Obama's plan may incentivize people to go into teaching, as well as incentivize people to complete their payments on time. We wonder if this plan could be expanded to include other critical careers. Maybe student loans should be canceled for people in some of the other important and hard-to-fill careers, such as IT staff, nurses, and drivers. Maybe they should be canceled for women who enter STEM fields?

2. How will this plan affect parents?

Many students who take out loans have a parent co-sign with them on the loan. Obama's plan says it will cut costs for low-income borrowers. Will this include students who signed their loan with a parent with a higher income? Could this be a reason to avoid having a parent come with you to the loan office? (Well, this, and the constant asking what you plan to do after graduation.) Also, as a recent article in USA Today discusses, some loans require the student to pay their loan in full if something happens to their co-signer. This can be devastating for a student whose parent passes away, and is forced to suddenly pay the entire loan on his or her own.

3. Is this the best solution?

According to The New York Times, the plan will cost the government $58 million in the next 10 years. The Obama administration has argued that this cost will be covered by The Buffett Rule, or millionaire's tax, but Senate Republicans have still criticized the student loan plan for being too expensive, and perhaps they have a point. While the memorandum is likely to alleviate many short-term concerns, does it have any mechanisms for pressuring private colleges to lower tuition? Until institutions of higher learning begin lowering the cost of college, the problem of student debt will persist, and grow. Is Obama's plan a little like putting a bandaid on a gunshot wound? How much can it really help?

4. How great does it feel to finally pay off your student loans?

The President would know! He and Michelle only finished paying off their loans eight years ago, and we want to know how they celebrated! Maybe we'll just wait and ask him tomorrow on Tumblr.