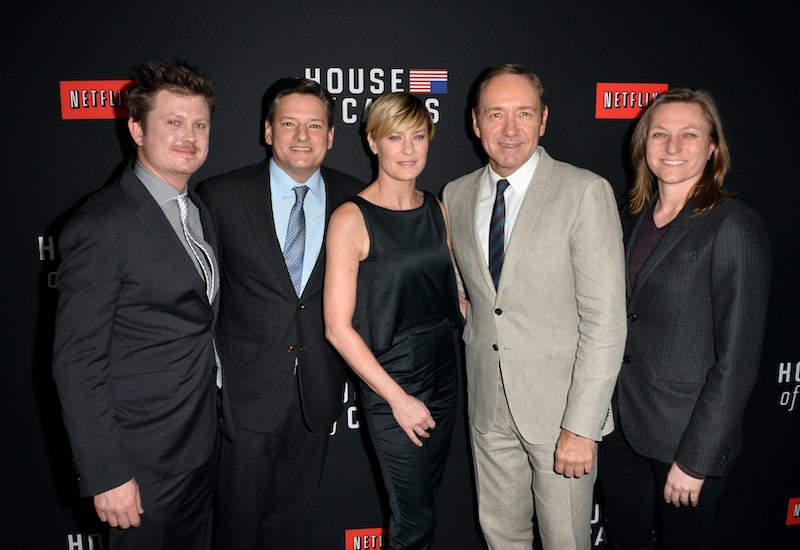 I do declare: it's been a few months since Season 2 of House of Cards went up on Netflix and we all hungrily ate it up in days. On Valentine's Day, no less! And even though now we're all whipping through Orange Is the New Black (seriously, Netflix has been churning out the goods in the shape of original series), a House of Cards Season 3 theory is never, well, out of the cards. On HuffPost Live on Monday, Michael Kelly, who plays the furrow-browed Doug Stamper, talked about his character's fate on the show: If you'll recall, Season 2 left Dougie with his head bashed in with a rock by Rachel in the woods. He seemed really and sincerely dead, but is he?

It wouldn't be out of the question for ghosts to come back in House of Cards, in more ways than one: This is a drama about being haunted, as much as it is about being hunted. And that lends itself beautifully to endless speculation.

Here are three theories about the upcoming season of House of Cards that will tide you over until its unknown release date next year. One thing's for sure: things are only gonna get more sinister.

In his interview with HuffPost Live, Michael Kelly said even HE doesn't know what will become of Doug. "I've tried a lot [to find out], are you kidding me? I wanna know! You go to the writers' room and there's black tarps over everything. You don't get to know anything," he said.

However, even the speculation is a good sign — it seemed like Rachel really did him in for good when she snuck up behind him with a rock in the woods. If Stamper really does make it out alive, he's going to be a lot worse for the wear, probably in a coma. And how will Rachel react if/when she finds out that Doug didn't die?

You can watch all of Michael Kelly's interview here.

A Reddit user noted that in the British series of the same name, the villain/antihero Francis is assassinated. Helmsb writes:

After watching season 1 and 2 of the US version of House of Cards the major plot points seem to line up with the UK version in which case I think that season 3 will be the final season and Frank Underwood will be assassinated at the end. Keeping with the connection to the UK version I believe that it will be orchestrated by his wife (in an effort to preserve his legacy in the face of impending downfall).

He goes on to theorize that Francis will be assassinated during a baseball game in which he does NOT have his bulletproof vest on (remember his hesitance to wear it during the second season?). It would ultimately be super satisfying to see Francis die at the hands of Claire Underwood, but do we really want her to be a killer?

There's definitely going to be a drastic disintegration of Claire and Frank's relationship in the third season, but will it go so far as to lead to murder? Now that Francis runs the country and the free world (shudder) could Claire live with herself and face the consequences of killing the president? And more importantly, could she get away with it? (I mean, yes, she probably could. She's just as, if not more, sly as Francis; the difference is, she actually has a conscience.)

3. Zoe Barnes haunts from beyond the grave.

This MUST be dealt with. Zoe, one of the best characters from Season 1, was mercilessly pushed in front of a train by a fedora-donning Francis at the early end of Season 2, and it was devastating. But a kill like that is certainly going to resurface in Season 3; at BuzzSugar, they note that in the British series, Zoe's character (named Mattie) was recording the conversation she and Francis were having before he murdered her, and the recorder is picked up by a faceless third-party. Now, in the US series, there's no recording device, but if the parallels to the UK series are anything to speculate from, there is evidence SOMEWHERE that Barnes left that will lead Lucas or Gavin to her killer (though they have their suspicions already, of course). We want justice for Zoe Barnes!

It's as of yet up in the air when House of Cards will return for our streaming pleasure, and there are sure to be more mystic, frustrating ad campaigns to precede Season 3 as there were for Season 2. Until then, we just have to survive on rumor, but one thing is for sure: things are going to get dark and desperate in the White House in Season 3.