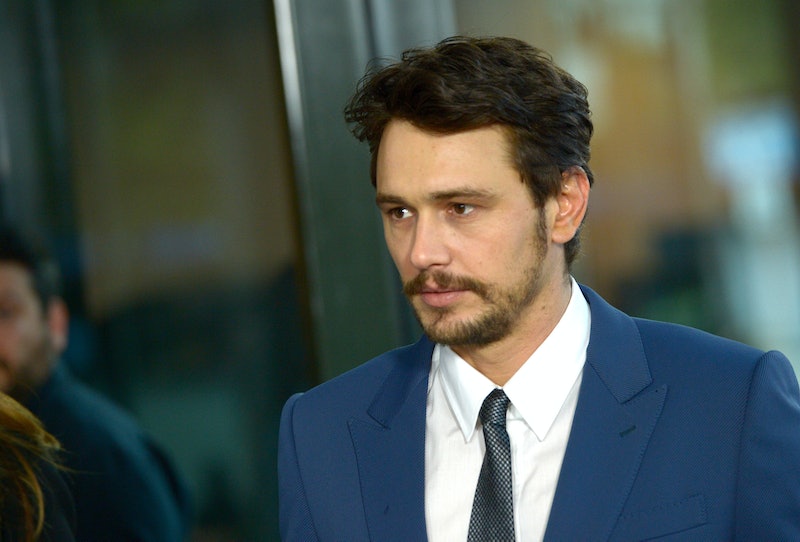 James Franco, what have you become? Have you been this all along, and we were just willing to look the other way because you hang out with some cool people and seem like you're willing to make fun of yourself? Was it that Japanese body pillow you were common-law married to on 30 Rock that did this to you or have you been this way since Freaks and Geeks? What even is "this way"? And Franco, did you really just write a story about that time you didn't hook up with Lindsay Lohan?

It seems like that's exactly what Franco just did, though it's published as fiction so it's not like this is anything other than the hearsay his relationship with Lohan's always been. Still, the story — published in VICE , naturally — co-stars a girl named Lindsay, to whom Franco is telling a story. It all bears a striking resemblance to the anecdote Franco regaled Howard Stern with a few months back when he was all "I did not have sexual relations with that woman."

And if you ever had any doubts that Franco really is just an aging pretentious graduate student or that sleazy un-tenured professor who sleeps with students, just look at how he talks about J.D. Salinger:

Once upon a time a guy, a Hollywood guy, read some Salinger to a young woman who hadn’t read him before. Let’s call this girl Lindsay. She was a Hollywood girl, but a damaged one. I knew that she would like Salinger, because most young women do. I read her two of the Nine Stories, “A Perfect Day for Bananafish” and “For Esmé—with Love and Squalor.” “Bananafish” was great because it has a nagging mother on the other end of the phone line, nothing like Lindsay’s real mother, but still, the mother-daughter thing was good for her to hear.

"I knew that she would like Salinger, because most young women do." All this needs is a Bukowski reference and we're all set. I also wouldn't put it past Franco at all to try to funnel this into some arthouse short film actually starring him and Lindsay Lohan. I kind of half expect it at this point.

You can read more of the story over at Vulture, or pick up a copy of VICE's summer fiction issue if you're really committed to reading the whole thing.