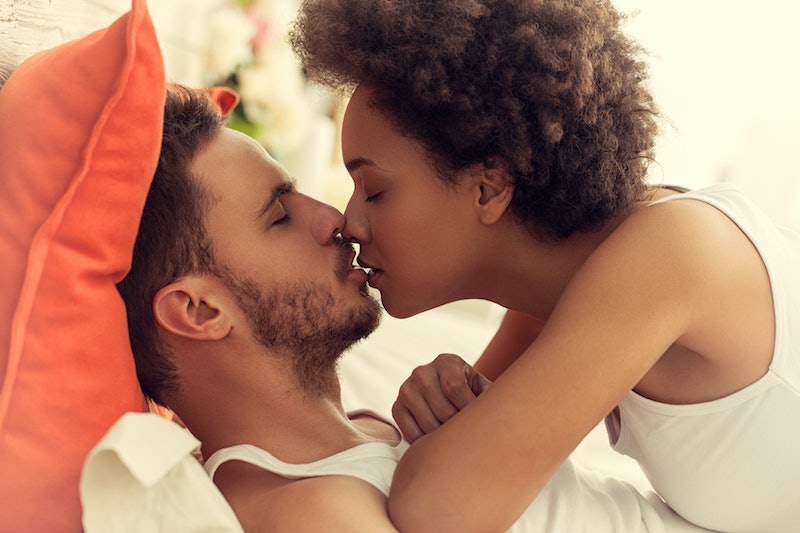 While scrolling through my Facebook newsfeed, I came across a link to a Gawker article that one of my friends reposted.

In an essay entitled "The Reality of Dating White Women When You're Black," writer Ernest Baker tackles big topics like Eurocentric beauty standards, the taboo aspect of interracial relationships, and why he dates white women, among others:

Why do I date white women? Black women have told me it's because I'm a sellout. The white men who can get past the mental anguish of my black penis tarnishing "their" women think I'm making some latent admission that their race has the most attractive women... Most people have it wrong. I'm not a "black man" who "dates white women." I'm a person. I have my own unique experiences and some of them include having dated women who are white, but because interracial dating is such a historically tense and loaded subject, it's hardly ever looked at with any understanding or compassion for the people personally involved. The concept of a black man in a relationship with a white woman is a "thing" that people have an opinion on...

Although I am a black woman in an interracial relationship, I only gave Baker's piece a cursory glance at first. In the midst of a full news feed, it just seemed like more noise. In fact, I completely forgot about it until a few responses started to pop up. It was Britni Danielle’s "Nobody Cares That You Date White Girls" piece for Clutch magazine that caused me to go back and reevaluate.

Lots of people in this country would like to believe that race relations are swell, racism is dead, and everyone is happy. Some like to think, "It's 2014. We have a black president. Slavery is over. What else is there to complain about?"

There's a belief among some members of racial groups that one who dates outside of that race is disloyal, self-loathing, or has, for lack of a better word, been brainwashed.

It's time to talk about that. As author Lincoln Blades asserts in a piece at Uptown magazine, we need to promote an honest discussion about interracial relationships. We need to stop pretending people don’t care.

It's hard to face the truth that educated and talented women like MacArthur Fellow Tiya Miles feel contempt towards black men who date white women. She wrote in a Huffington Post blog late last year:

It is the same sharp tug of disappointment that gets me every time I see a black man with a white woman on his arm. Try as I might to suppress the reaction, I experience black men's choice of white women as a personal rejection of the group in which I am a part, of African American women as a whole, who have always been devalued in this society.

When I first read Miles' opinions, I was surprised, until I looked into the comments section and saw readers seriously advocating for solely dating within one's race.

We are all members of this collective community living on Earth, and we all need to start being honest with ourselves. What does it mean to be uncomfortable about interracial dating in 2014? What are the causes of this discomfort? Why are so many people advocating a "stay with your own race" mentality?

As a young woman of color, I can attest to the fact that many people in this world feel it is their duty — no, their God-given right — to decide what is best for me, and especially whom is best for me to date.

For instance, I felt the need to defend my relationships to my mother who, like Baker’s mother, wondered when her daughter would bring home someone who looked more Michael B. Jordan then Ryan Gosling.

My mother will resent me for saying this, but I know there is a part of her that wanted to see me settle down with someone black, someone who looked like me. After five years of my boyfriend and I dating on and off, I think my mom has come to love him almost as much as I do. It didn’t seem to matter anymore what he looked like. Still, it was always funny that my mother questioned why I kept dating white guys, especially because I was raised as one of only few people of color in my community.

When you look at the role models of my youth, the people and products the media put forth and said, “This is beauty personified,” you’ll notice a distinct theme: Barbie, Britney Spears, Polly Pocket, Sailor Moon, Mandy Moore, Mary Kate and Ashley — all white. I was fully submerged, I mean genuinely immersed, in a culture where people like me weren’t valued as beautiful, so much so that I remember wishing the thick, coarse hair on my American Girl doll, Addy, was straighter and “prettier,” like that of my other dolls.

After years and years of internalizing the beauty standard promoted all around me, I headed off to college with a low self-esteem and essentially no sense of self-worth.

I went out to a frat party with my roommate on our first night. I was in a new city and in a completely new situation. I expected things to be similar to the way they were in high school. I had dated a few guys before, all assholes, and I didn’t think many people would show interest in me. I looked down at my fingertips, stained deep mocha from my foundation, and felt self-conscious. But then something happened: people started talking to me, flirting even.

Once I escaped the small, isolated microcosm of Upstate New York, I met people who didn't think of me just based off of my skin color. I met my current boyfriend the next night, and he we are, still together five years later.

Still, I would never ever say that being in an interracial relationship has been easy. I was fully aware that he had blond hair and blue eyes when I met him, obviously, but I didn't really understand what that meant until years later. One of the most difficult parts about being in an interracial relationship is the fact that I started to question things I never I questioned before.

I started thinking about the media and asking myself what qualities I was actually attracted to in a man, specifically my boyfriend, versus what qualities I'd been taught to find attractive. Part of me used to envy how soft, straight, and blond his hair was. One of my favorite things to do was to play with his hair. He would lie with his head in my lap, and I would run my fingers through the blond strands. It was so effortless to do that, to just run my fingers through his hair. When I did that to my hair, my hand got stuck a quarter of the way through.

Later, though, his hair color and eye color began to feel less important to me. They became superficial and meaningless, because the man I had fallen in love with would be the same person regardless of what color his hair and eyes were. I couldn't deny that those characteristics had been among those that drew me to him, but they were no longer among the things that most attracted me to him. If he put in brown contacts and dyed his hair black tomorrow, I would love him just as much as the day I met him. As I think happens in most relationships, the physical attributes that initially attracted me to him aren't as important anymore.

He's a whole, round, complete person. We have different outlooks on life. Sometimes he doesn't fully understand where I'm coming from or the way I approach an argument as someone who hasn't experienced racism in the same way. And yet, one of the things I love is the fact that we are so different, that we've lived completely different lives, but we still have so much in common. Our fundamental beliefs, our core ideals, are the same, and that is key in any relationship.

Being in this relationship has taught me that there's no separating the physical characteristics you genuinely desire from those you were taught to desire, and that I don't need to apologize for what I'm drawn to. When it comes to who I’m attracted to and who I decide to become involved with, it’s nobody’s business but my own. I think it's important to examine for myself why certain traits appeal to me, as a way of understanding my own development as a person of color. I feel no guilt about why I feel the way that I feel about certain people.

Now, when people come up to me and teasingly ask if I date just white guys, or if I don't date black guys, it doesn't really bother me.

What? You're too good for black guys? Is that it?

I don't let those questions influence me or my feelings towards my relationships.

People who try to defend their attractions and relationships in the face of this idea often argue that love is blind. I hear this cliché a lot. Love is blind. As someone who has dated mostly people of a different race, I can assure you love is not blind. Love is informed by the media, by feelings we are taught to feel from our childhood on, and by our everyday experiences. Even if I was dating a black man, love still wouldn't be blind.

The actual reality of being in an interracial relationship is that it's easy when it's just the two of you, but it sure is hard when everybody else starts getting involved.

To circle back to the important point that Lincoln Blades made, we need to start a dialogue about the things that make us most uncomfortable. Where I live, I don't experience much persecution for my relationship anymore because the state and area is fairly liberal. Sometimes I forget about the way that things are in other parts of the country, or the world.

We still have a long way to go. Ernest Baker's piece helps to remind us all that some things, even things that aren't as socially taboo as they used to be, are still taboo to some. Take a look in the comments section of Baker's piece, and you'll see that people are very passionate about interracial relationships and racial issues.

I tell my story not because I felt compelled to explain myself or to justify but to promote a discussion. Some people may never understand, and it isn't my job or the job of anyone else in an interracial relationship to force our opinions down their throat, or to fight them.

It is our responsibility, however, to be true to ourselves and the ones we love. One response in the comment section on Tiya Miles' piece eloquently sums up what debates about interracial dating often miss:

More like this
'Black Panther 2' Star Dominique Thorne Prioritizes Her Career Over Dating
By Jake Viswanath
Hinge's New Feature Makes It Easier To Explore Non-Monogamy
By Lexi Inks
Bumble's "Compliments" Feature Lets You Message Before You Match
By Lexi Inks
Are Sagittarius & Capricorn Compatible In A Relationship? Astrologers Weigh In
By Kristine Fellizar
Get Even More From Bustle — Sign Up For The Newsletter