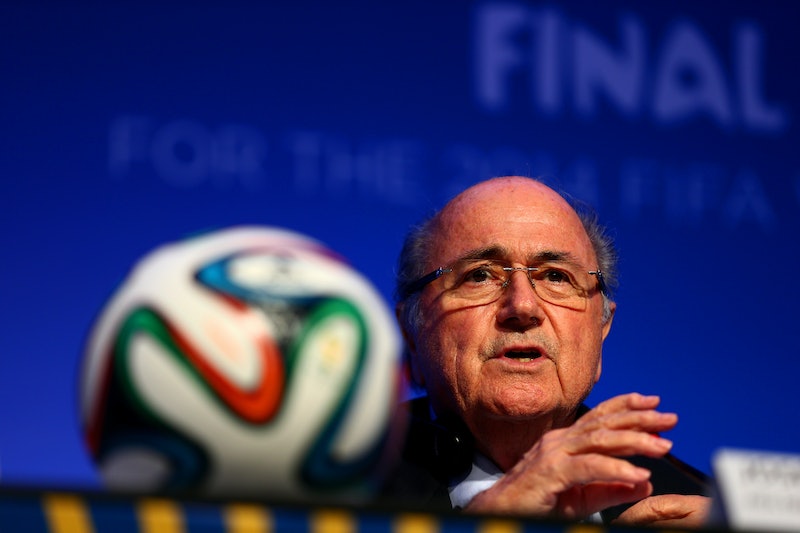 With the World Cup just around the corner, sexist FIFA President Sepp Blatter has once again stumbled clumsily into the spotlight. Blatter, a native of Switzerland, has been serving in his current position and for sixteen years — about as many years as he's been putting his foot in his mouth. Most recently, Blatter accused FIFA sponsors and the Western media of racism. These are strong, and frankly bizarre, words coming from a man who once said that there isn’t any racism in soccer.

Now Blatter seems to have changed his tune, announcing that allegations of corruption in Qatar “smack... of discrimination and racism.” Blatter’s accusation might hold more weight if he weren’t known for frequently offering politically incorrect opinions of his own, and hadn’t just joked about Qatar’s anti-gay legislation.

The 2014 World Cup is bringing up a host of social issues — even without Blatter’s offensive ramblings — as Brazil struggles to fund the extravagant event amidst growing poverty and internal strife. Don’t worry, we’re sure Blatter will come up with something offensive to say about that, as well. In the meantime, let’s take a look at the four most abhorrent things Blatter has said and done to women since 2004...

1. He comments on his colleagues' appearances

In 2013, Moya Dodd, a former Australian soccer player, was up for a position on FIFA's executive committee. In what he must have thought was an important endorsement, Blatter called Dodd, "good and good-looking." Thanks for the info, Blatter. Without the information about her appearance, FIFA might have had to judge Dodd solely on her accomplishments.

2. He thinks women talk too much

That same year, Blatter bragged about how many women there were on the FIFA board (a whopping three), and encouraged them to speak up from the crowd where they were sitting. "Say something ladies!" Blatter encouraged. He continued, "You are always speaking at home. Now you can speak here."

Well, that's a relief. Apparently the women appointed to the FIFA board will, in fact, be allowed to talk. At home, however, Blatter seems to think women need to pipe down.

3. He thinks women's soccer is about women's bodies

In 2004, Blatter suggested a new tactic for getting fans interested in women's soccer. "They could...have tighter shorts," he suggested.

Female players are pretty, if you excuse me for saying so, and they already have some different rules to men - such as playing with a lighter ball. That decision was taken to create a more female aesthetic, so why not do it in fashion? Let the women play in more feminine clothes like they do in volleyball.

Yes, let the women play in tiny shorts, for goodness sake! That must be what they want after all. To Blatter's surprise many female soccer players disagreed. In reference to the comment, Pauline Cope, a British goalie, told the BBC, "We don't use a lighter ball for one thing, and to say we should play football in hotpants is plain ridiculous." Fulham manager Marieanne Spacey added another perspective: "Ten years ago we did play in tighter shorts. Nobody paid attention then."

In April of 2013, Alexandra Wrage resigned from FIFA's independent governance committee, because of "blatant sexism." Wrage told the press that FIFA was ignoring her ideas for reform and said she was "frustrated and surprised."

More like this
Watch Jacinda Arden’s Devastatingly Honest Resignation Speech
By Sam Ramsden
6 Organizations Fighting Police Brutality That You Can Support Right Now
By Syeda Khaula Saad and JR Thorpe
24 History-Making Black Women You Probably Didn't Learn About In School
By Ayana Lage and JR Thorpe
The 6 Best Sunglasses For Snow
By Lauren Moison
Get Even More From Bustle — Sign Up For The Newsletter
From hair trends to relationship advice, our daily newsletter has everything you need to sound like a person who’s on TikTok, even if you aren’t.