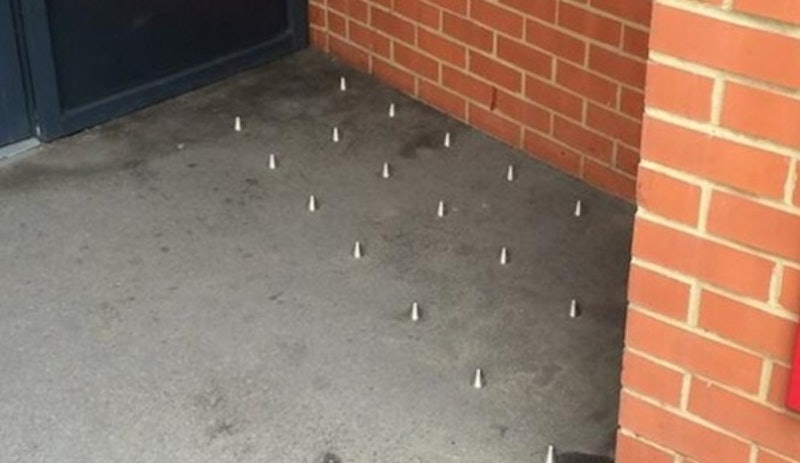 Some people put out welcome mats, some put out... spikes? A luxury apartment building in London has installed spikes to prevent homeless people from sleeping in an alcove outside of the building. While the inch-high metal spikes may not be sharp enough to pierce the skin, they're certainly offensive enough to pierce through humanity's collective heart. And then some.

The spikes have garnered criticism from both London residents and, well, everybody. Over 62,000 people had signed a Change.org asking to remove the spikes, edging toward the 75,000 goal after one day. London Mayor Boris Johnson called for the removal of the spikes, saying they were "ugly, self-defeating, and stupid." There has been a steady stream of Twitter criticism, sparked by a Tweet of the spikes over the weekend, which has snowballed into media critics and the community at large rallying against the issue.

London joins a number of other cities in this bizarre, inhumane method to keep the homeless off of the streets. In the Chinese city Guangzhou, giant spikes were erected under bridges previously a popular spot for the homeless population to sleep. Paris has them. NYC, too. Spikes may be one of the less subtle ways of telling someone they aren't welcome, but it's not the only tactic used to keep the homeless from staying the night.

Have you ever noticed sleek, rounded benches at bus stops? What about park benches divided by arm rests? These are both subtle ways of preventing someone from staying overnight making it nearly impossible to stretch out over the seats.

Some cities are a little less crafty. In Sarasota, Florida, city officials removed park benches completely when they received word that homeless people were using them after park hours.

As pointed out by The Guardian's Hugh Muir, these "efforts" to end homelessness often do little to get at the root of the problem: helping out fellow human beings. In this case, he writes specifically of Mayor Boris Johnson's inability to follow through with any real course of action, even though Johnson had nothing to do with the actual installation of the spikes. Still, it rings true in other circumstances. In Honolulu, which also installed anti-homeless benches at bus stops, there is a measure touted by the mayor that would criminalize sitting or laying down on sidewalks.

C'mon, London. Spikes are great on shoes, not on sidewalks. We suggest taking less brutal measures and throw that kind of creative energy into solving the "rough sleeping" problem, which has seen a 75 percent rise in the last three years.