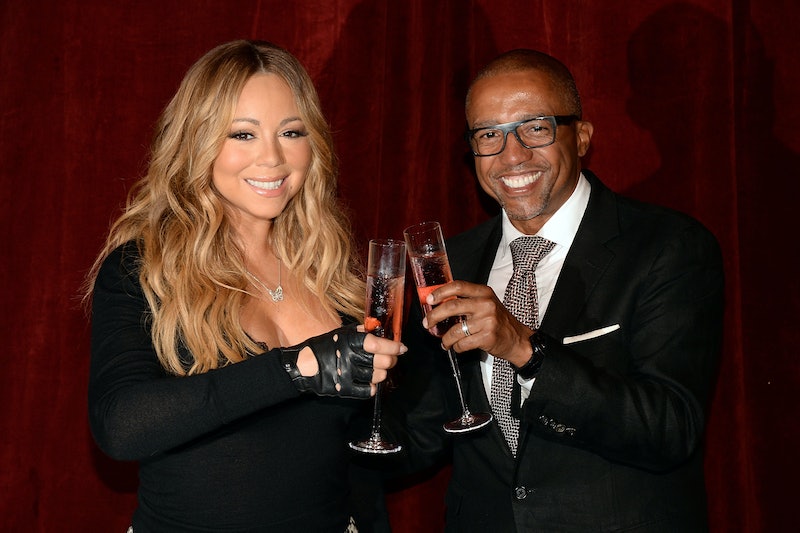 Just call her, "The Elusive Soft Drink Chanteuse." That’s right, for reasons unexplained, Mariah Carey has just launched her own beverage called Butterfly. Reportedly, it tastes just like liquid gummy bears. Or, as HelloBeautiful.com put it, like Gatorade…but with “more sugar.” Somebody pinch me, I must be dreaming. But it gets better. After downloading the Go N’Syde Beverage app (the company that produces Butterfly), consumers can scan the bottle with their smartphones in order to be transported to Carey’s exciting new social network, where she will supposedly be posting exclusive video messages, photos, and behind-the-scenes content just for her fans. What the what??

At the recent Butterfly launch event held at the St. Regis Hotel in New York City, Carey sipped the light pink concoction from a champagne flute, telling members of the press (yes, members of the press were in attendance) that she “actually liked” like the drink — a curious endorsement. She continued by saying, “The truth of the matter is, it’s good. I’m not lying!” Well, that’s certainly reassuring.

I know it sounds like I’m making this whole thing up, but trust me, Butterfly is very real. I know, because I bought a bottle at Walgreens on Tuesday morning. Yup, it was just me, standing outside of Walgreens at 8 AM, waiting for them to open their doors so that I could buy Mariah Carey’s new drink that comes in a hourglass-shaped, hot pink bottle. Super casual. Like you do.

So, what's it like to drink Butterfly, you ask? Let me tell you all about it.

Oooh, this thing looks expensive. I know I'm going to be feeling sexy as hell drinking this!

What is a "melodic beverage," exactly? More importantly, Mariah knows magic?? She should've cast a spell to make people buy her last album! JK, but seriously.

Apparently, Butterfly is going to give me "something new to sing about." Go on, I'm listening! Oooh, and it's also going to lift me to my "high notes" every day! I could get used to that. The bottle mentions the drink's "sophisticated sweetness," which I suppose comes from its proprietary blend of preservatives and Red 40 and Blue 1? Oh, and probably those mysterious "natural flavors," as well. Let me put this stuff inside my body, STAT.

Oh God. I mean, it does taste kinda like liquid gummy bears, but woof, that after taste. It's like I've been sucking on a fistful of nickels. But lemme give it one more shot, just in case...

Perhaps it will taste better if I drink it from a champagne flute, just like Mariah?

Nope. This stuff is a mess. It's so sickly sweet, it made my teeth hurt. I did, however, feel roughly a 1,000 times more fancy and glamorous. I guess that counts for something, right? As they say, pain is beauty.

When I downloaded the app and scanned the bottle's special barcode with my iPhone, a Mariah-esque instrumental began to play and butterflies started flying all over my screen. How whimsical! As far as the "exclusive" content goes, there's a photo gallery that contains some outtakes from Carey's last album (boring), and a video of various fans lip synching to "Eternal (You're Mine)"...if you're into that sort of thing. However, no one's really into that sort of thing, so I'd recommend skipping the social network altogether. There's also a blue bubble that says "SWEEPSTAKES COMING SOON," but I'm guessing you'd be entering to win a lifetime supply of Butterfly, and that's something I am definitely not interested in.

In conclusion, Butterfly is a poisonous, metallic death potion that comes in a ridiculous bottle. Drinking it might make your teeth fall out, but it also might make you feel like a million bucks... err, maybe more like 325 bucks plus a coupon for a free small frosty at Wendy's. Yeah, that sounds about right.

Butterfly is available now at Walgreens stores nationwide. Bottoms up!

More like this
Dan Levy Showed His Mariah Carey Devotion Yet Again With A “Honey” IG Story
By Grace Wehniainen
The 8 Best Chew Bones For Puppies, According To A Vet
By Andrea Hannah
The 4 Best Blenders For Acai Bowls
By Ileana Morales Valentine
The 6 Best Spill-Proof Coffee Mugs That Reviewers Love
By Tiana Crump
Get Even More From Bustle — Sign Up For The Newsletter