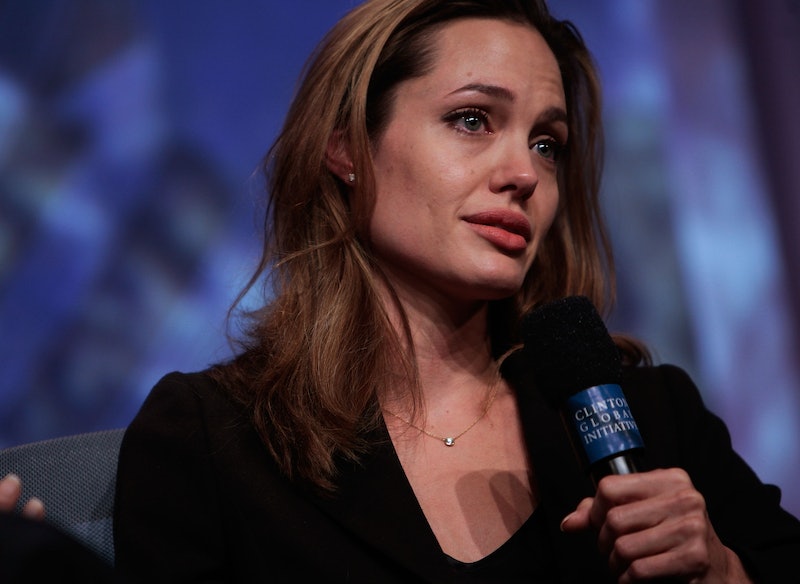 Just last week Angelina Jolie was still peddling Disney's latest fare, but now she's across the world acting as the special envoy to the UN High Commissioner for Refugees and co-hosting a summit called End Sexual Violence in Conflict. Jolie spoke to a crowd of world leaders and delegates, appealing to them to take action against the practice of wartime rape. Her cause is an important one, and Jolie's words also spoke to some of the larger issues of sexual violence that often go ignored:

It is a myth that rape is an inevitable part of conflict. There is nothing inevitable about it. It is a weapon of war aimed at civilians. It has nothing to do with sex, everything to do with power. It is done to torture and humiliate innocent people.[...] We need to shatter that culture of impunity and make justice the norm, not the exception, for these crimes. We need political will replicated across the world, and we need treat this subject as a priority.

In a world saturated with Game Of Thrones and its source series A Song Of Ice And Fire the concept of wartime rape shouldn't be too foreign to even the most sheltered of people — but for far too many people worldwide it doesn't get to just be a fiction.

What she says here, too, extends past the confines of war: Jolie mentions that "it has nothing to do with sex, everything to do with power," and that's a statement that very much applies to sexual assault in the broader sense; that rape is some kind of impulsive response to sexual desire is a perception that's permeated societies all over the world and helped to foster a poisonous rape culture. Studies on the behavioral characteristics of rapists have backed up Jolie's statement, too, with one saying that "although rape always included power, anger and sexuality, [it was] proposed that sexuality was never the dominant theme, as in each case they studied either power or anger dominated."

Jolie is in a unique position in this world: She's both one of the most famous movie stars in the world and a very prolific political activist. In other words: She can star in a movie that uses rape heavily as allegory, spend a few months promoting that movie, and then fly to London to talk about the real thing. Some say it's all PR trappings, but even if by some kind of fluke it is, you kinda gotta be grateful to Jolie for the latter.

More like this
Olivia Rodrigo’s Song Dedication To 5 SCOTUS Justices Sent A Strong Message
By Grace Wehniainen
Eurovision 2023 *Might* Be Held In The UK
By Sam Ramsden and Rachel Mantock
What Does The Presley Family Think Of 'Elvis'?
By Arya Roshanian
Chris Hemsworth Joked That Baring His Butt In ‘Thor: Love And Thunder’ Was A “Dream”
By Brad Witter
Get Even More From Bustle — Sign Up For The Newsletter